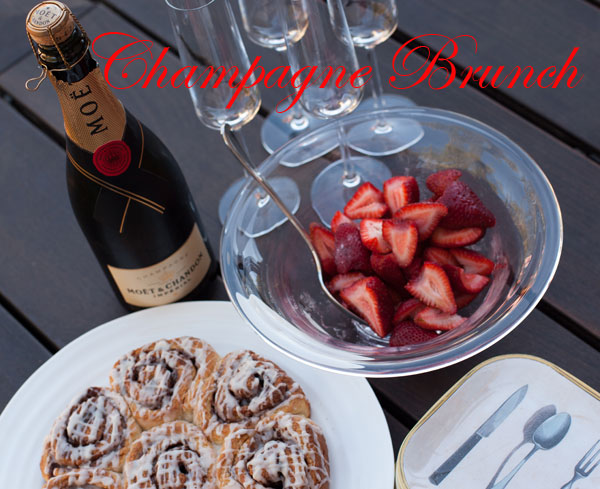 I was exhausted on Saturday night after a full day of casting for MasterChef, tasting every one’s dish that came to the open casting call in Los Angeles. Needless to say I got home, fed the kids and as soon as they were in bed I got ready for bed myself. This meant I didn’t make a brioche dough to rise overnight ready for brunch the next morning as planned. I woke up on Sunday, thankful for the extra hour in bed as the clocks went back, but with about an hour and a half to make cinnamon buns, hull and macerate some strawberries, chill a bottle of champagne and tidy the house ready for our guests. It was time to tackle a recipe for quick cinnamon buns to be enjoyed by young and old. 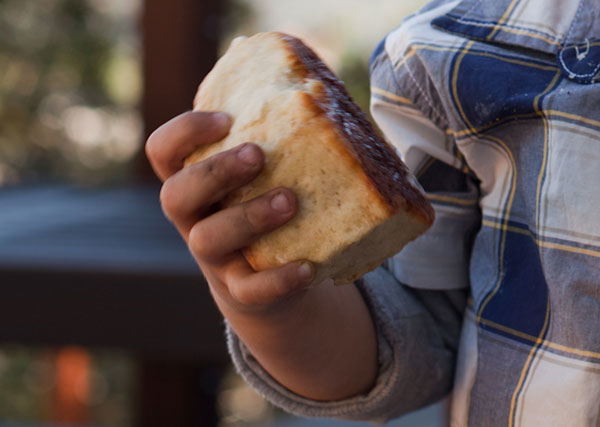 I often like to take an old recipe and see if I can develop it and make it easily doable for a modern day home cook and Sunday’s recipe was for cinnamon buns. This was basically the premise for my book, Made in America, when I called upon 100 of our best chefs cooking in America today to take old recipes and make them new. I didn’t have time to make the recipe for Cinnamon Rolls in Made in America, from Michael’s in Santa Monica because it uses a yeast based brioche dough and requires at least 8 hours. I found another recipe for cinnamon rolls that uses baking-powder. It’s not much more than a few lines; some ingredients and a few very basic instructions from The Jewish Cook Book by Florence Kreisler Greenbaum first published by Bloch Pub. Co. in New York almost one hundred years ago in 1918:

This 1918 recipe for cinnamon buns doesn’t use yeast – so no overnight rise or hour long proof needed – just mix up the ingredients and bake. As the modern recipe emerges from the old recipe, so it grows and grows. Today’s home cooks are used to clear, step by step instructions, often accompanied by photos for each stage of the recipe a la Pioneer Woman. So the modern recipe for Quick Cinnamon Buns has puffed up like the buns in the oven – but the basics are here and there’s really nothing new: Flour, sugar, salt and baking powder are mixed up with butter and milk to form a soft dough which is then rolled out, spread with sugar, more butter and cinnamon and then rolled up, cut into pinwheel slices, laid in a buttered pan and baked in the oven. 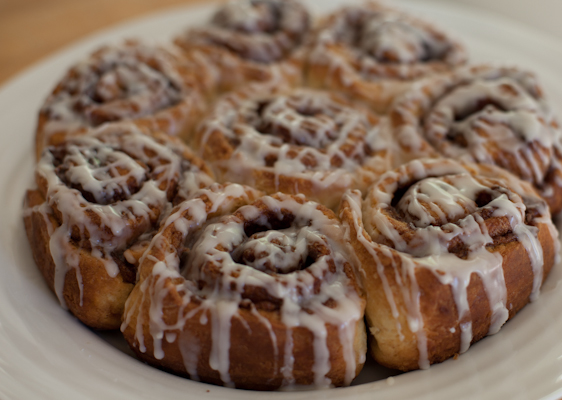 Quick and Easy Cinnamon Buns Recipe
Based on a recipe from The Jewish Cook Book by Florence Kreisler Greenbaum, 1918

These are really very quick and easy to make – perfect for a Sunday brunch or a holiday breakfast – just add chilled champagne, strawberries and good friends. The melted butter is used in the various stages throughout the recipe so it’s easiest to start off by melting the 8 tablespoons of butter and divide as you go using a tablespoon. The 1918 recipe used powdered cinnamon in the recipe – I have added a little ground cloves and nutmeg as I like the spice flavor but don’t like a lot of cinnamon. I have also substituted some buttermilk and plain yogurt for some of the milk in the old recipe – the acid in these ingredients reacts with the baking powder/soda and means you can use less leavening agents to result in extra light and fluffy buns.

Ingredients:
8 tablespoons butter, melted – divided as listed in the recipe below

For the cinnamon filling

To make the Cinnamon Buns

1. Place rack in the middle of the oven and pre-heat to 425F. Lightly butter the spingform pan (I used the butter wrapper – you can use a tablespoon of the melted butter.)

To Make up the Buns
1. Roll out the dough to a 12 x 9-inch rectangle and brush with 2 tablespoons melted butter.
2. Spinkle the dough with the cinnamon/sugar filling leaving a small border. Press the cinnamon/sugar filling into the dough. Roll up the dough starting at the long side and press firmly to form a tight, even log.
3. Seal the seam, trim the ends and cut into 8 equal pieces.
4. Place the rolls in the pan – one in the centre and 7 evenly spaced around. Flatten slightly and brush with 2 tablespoons melted butter.
5. Bake in the oven for 20 – 25 minutes until golden brown.
6. Release from the pan, invert onto a plate and remove base. Turn right side up onto a cooling rack and let cool for 5 minutes.

To Make the Glaze
1. In a small bowl using a teaspoon mix together the confectioners sugar, vanilla and 1 tablespoon of milk. Add more milk a few drops at a time until you get the perfect consistency for a smooth glaze – not too runny and not too stiff.
2. Place the cooled buns on the wire rack over a large plate and using a small spoon drizzle the glaze over the buns backwards and forwards across the buns. Serve immediately. 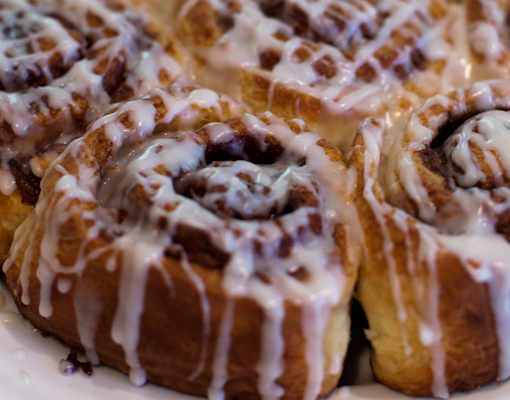