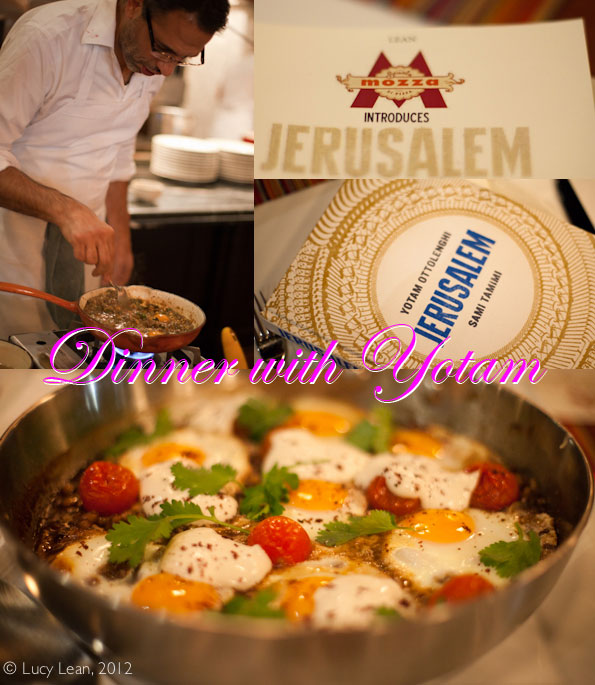 Last night was one of those magical dinners that leaves you with memories that will be with you for years to come. Great food and great friends, all together to celebrate the giant achievement of one man – a really special man – who I am so very grateful to call a friend – Mr. Yotam Ottolenghi and his new book Jerusalem: A Cookbook

and cook up some of Ottolenghi’s warmth and deliciousness, because after all I’m all about sharing, be it recipes, friends or fun. Just look at this hug – I mean it’s not often I get embraced like this by a man in chefs’ whites – and my hubby was the one who took these pics.

I love to bring people together – like a great pairing it makes me happy to know two of my friends are now good friends. Like when I arranged for Nancy to visit Yotam in London when she was there in the spring, they had already met when Didier and I took Yotam and his husband Karl to dinner at Osteria Mozza at the beginning of this year. Nancy returned from London excited and adamant to host a dinner for Yotam when he visited Los Angeles to promote Jerusalem. 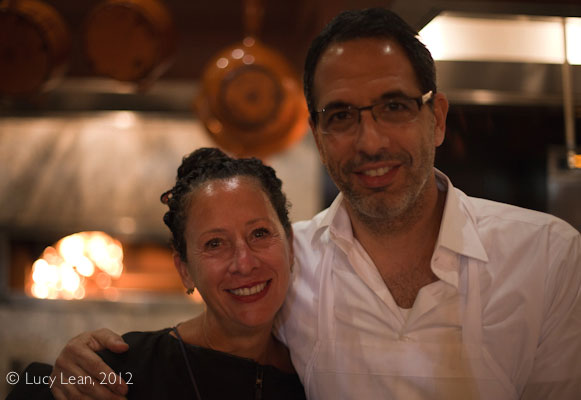 Nancy and her team (including Matt Molina and Chad Colby) cooked up the unforgettable meal based on recipes from Jerusalem. We all gathered in the Scuola di Pizza for the dinner, sitting at 3 long tables and eating family style. 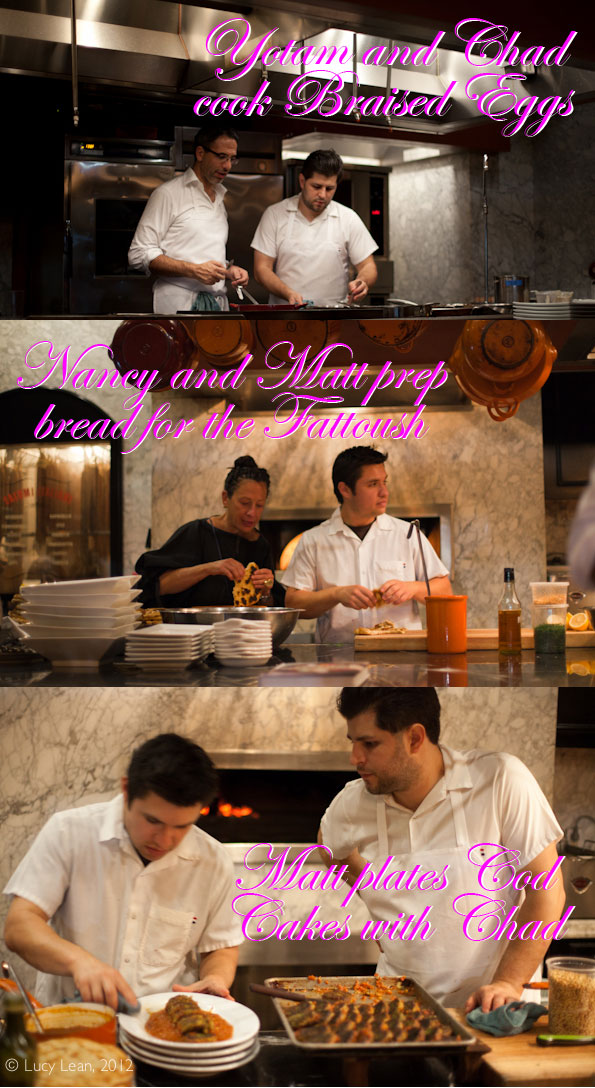 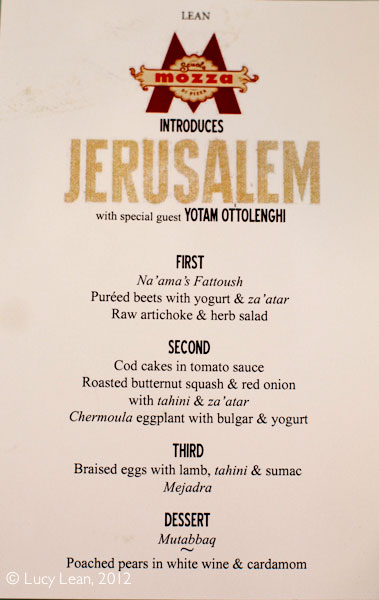 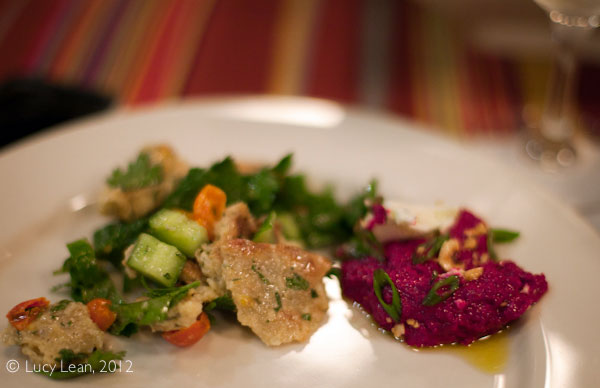 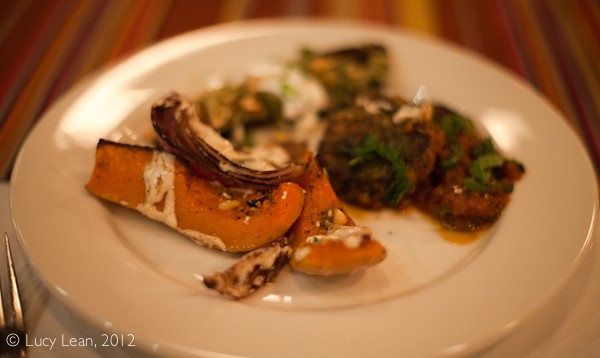 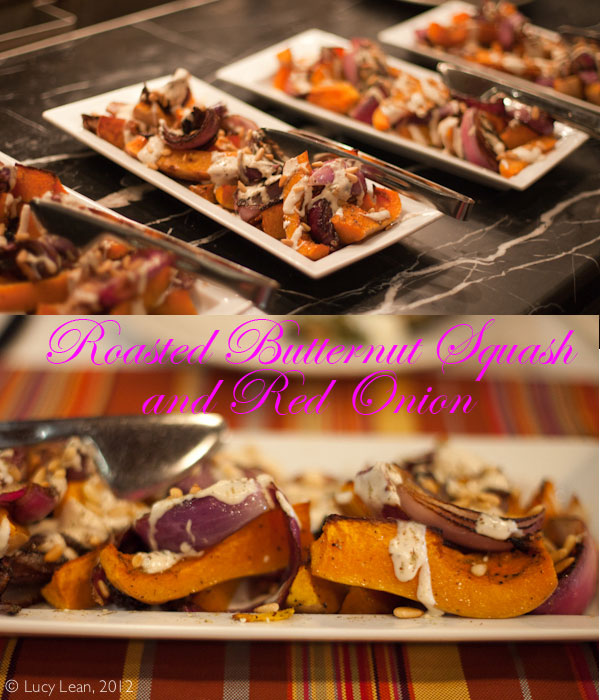 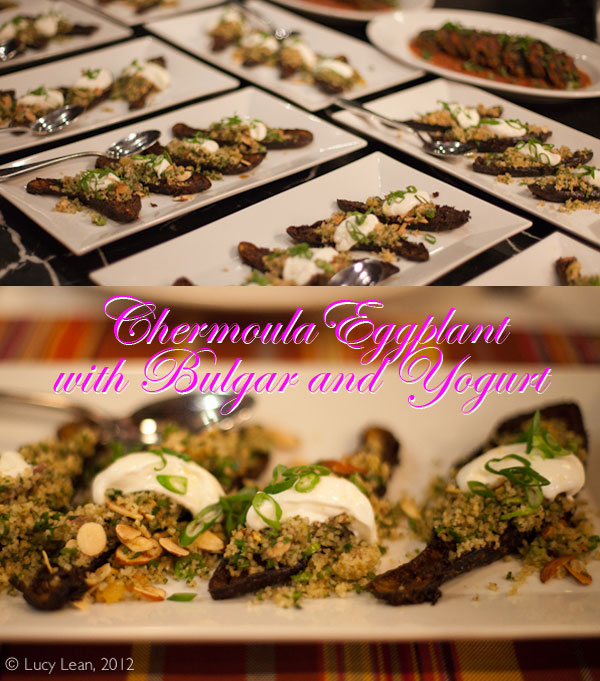 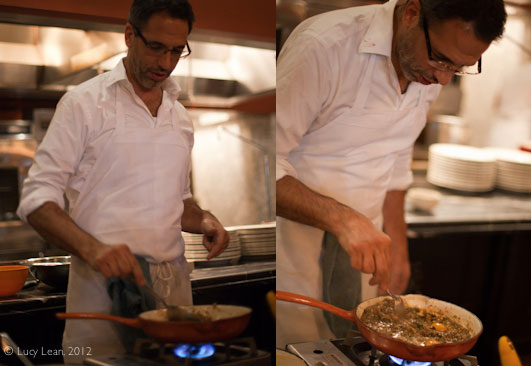 Yotam demonstrated how to cook up this Jerusalem fusion dish of braised eggs with lamb at the dinner that graces the cover of the US edition of Jerusalem. 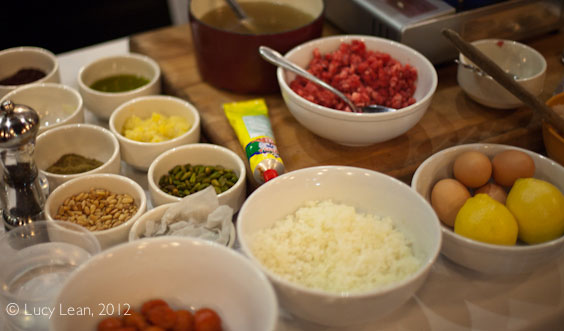 Heat the olive oil over medium-high heat in a medium, heavy-bottomed frying pan for which you have a tight fitting lid. Add the onion and garlic and sauté for 6 minutes to soften and color a bit. Raise the heat to high, add the lamb, and brown well, 5 to 6 minutes. Season with sumac, cumin, 3/4 teaspoon salt, and some black pepper and cook for another minute. Turn off the heat, stir in the nuts, harissa, and preserved lemon and set aside.

While the onion is cooking, heat a separate small caste-iron pan over high heat. Once piping hot, add the cherry tomatoes and char for about 4-6 minutes, tossing them in the pan occasionally, until slightly blackened on the outside. Set aside.

Prepare the yogurt sauce by whisking together all the ingredients with a pinch of salt. In needs to be thick and rich but you may need to add a slash of water if it is stiff.

Add the chicken stock to the meat and bring to a boil. Make 4 small wells in the mix and break an egg into each well. Cover the pan and cook the eggs over low heat for 3 minutes.

Place the tomatoes on top, avoiding the yolks, cover again, and cook for 5 minutes, until the egg whites are cooked but the yolks are still runny.

Remove from the heat and dot with dollops of the yogurt sauce, sprinkle with sumac, and finish with cilantro. 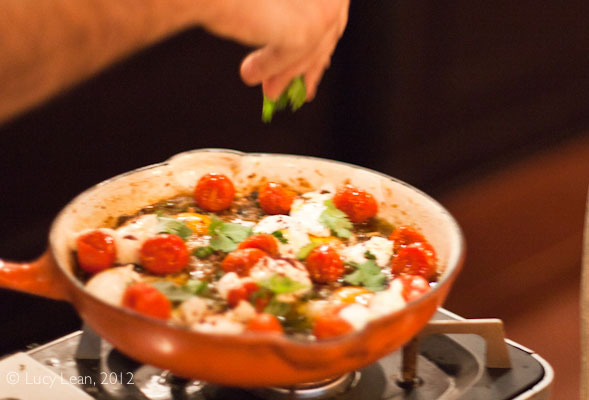 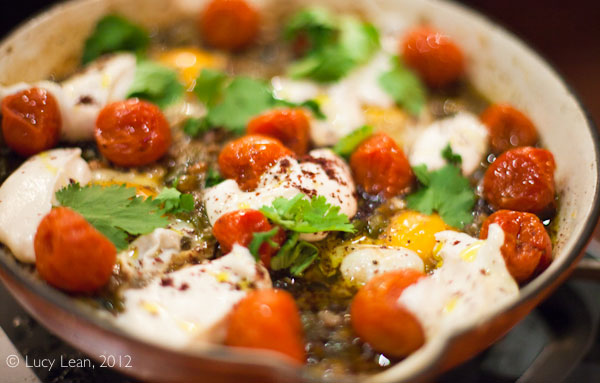 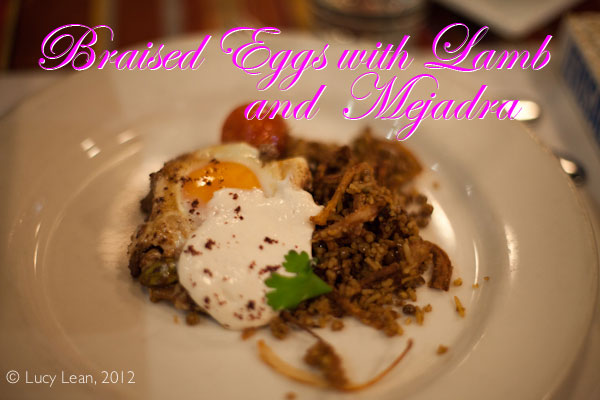 By this point I had rather slowed down taking pictures and was deep in conversation about quinine, The Cookbook Database, and Five Thirty Eight – amongst other things as I tucked into the prettiest saffron yellow pear. Wish I’d taken a moment to snap a pic but there you have it – I didn’t. I did however get a lovely shot of Nancy and Yotam deep in conversation about something on their iPhones – a joint tweet perhaps? If you want to have some fun leave a caption in the comments. 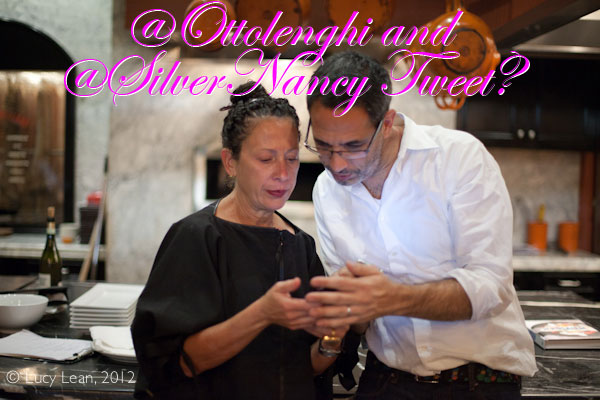 The evening wound down and Yotam had made his way around all three tables signing everyone’s copy of Jerusalem and spending time with all the guests. Rather than sign the same witty comment in every book Yotam took the time to learn a little about the recipient – in my case I had him sign one copy for my friend Melissa (and her mother) in Brooklyn – they’d been to a signing in Park Slope but hadn’t managed to get Yotam to sign a book because he was mobbed. He wrote “Sorry to miss you in Park Slope!” 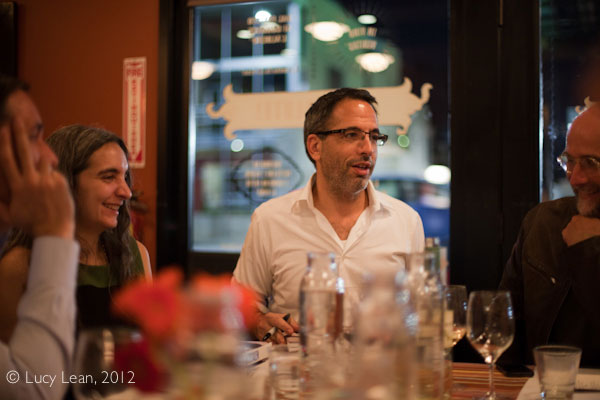 The room was filled with happy people with very full bellies as the checks were all paid and the goodbyes and thank yous made. 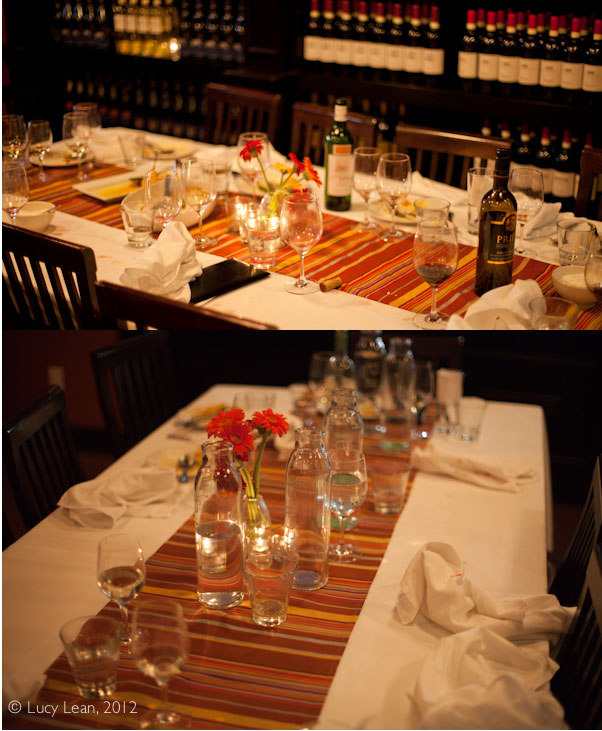 Didier and I drove Yotam back to his hotel in West Hollywood and said our fond farewells – hoping to see him at Christmas time if we make it back to London – since he makes the BEST mince pies EVER it’s incentive enough to make the trek home… Funny to think Yotam used to cook for me and Didier when I lived in London around the corner from Baker and Spice in the late nineties. We would order mince pies and large loaves with cloves of caramelized garlic baked into the bread from Baker and Spice, where Yotam was the Pastry Chef, to take to Devon for the holidays.