Last night I was lucky enough to attend the kick off of the 5 x 5 Chefs’ Collaborative Dinner Series with a dinner at Mélisse with @FrenchChefWife and @ChefLudo’sMaman. The 5×5 collaborative is in it’s fifth year and this year the five chefs are Josiah Citrin (Mélisse), Michael Cimarusti (Providence), Michael Voltaggio (ink), Rory Herrmann (Bouchon) and Gino Angelini (Angelini Osteria). They each host a dinner at their respective restaurants and invite a guest chef to join the party – in the process they build community, respect, a forum to learn from each other and a chance to hang out together – being a chef can be pretty lonely with all those anti-social hours and late nights behind the stove. Last night’s guest chef was Ludo Lefebvre (LudoBites).  As well as giving the chefs the chance to have some fun in the kitchen together the dinners are for a good cause – raising money for the Special Olympics of Southern California.

The 5×5 chefs collaborative dinner series plans to bring in some additional firepower for 2012, in addition to the one-night-only appearance from Ludo Lefebvre at Melisse expect to see Jeremy Fox (at Providence on May 21), Michael Tusk (Angelini Osteria in July), Mystery Chef still to be announced (Bouchon (August 20th) and  Chris Cosentino (ink. on September 16th).

I want to get straight to the food. As you might expect at a dinner cooked by 6 men we began the night with balls – and not just any balls but foie gras and rhubarb with dehydrated whey and citrus crumbs on the plate. A mouthful of decadence to start us off on the right not, that sadly is not long for this town (the foie ban comes into effect July 1st). We chose to stick with Champagne – NV Cote Audoin de Dampierre – that’s just how these 3 ladies roll! Pink French bubbles all the way baby.
I was tempted to play a guessing game with you – pair the chef with the dish they had created – but then I realized this wouldn’t work – for a start I don’t have a picture of Josiah Citrin’s dish – the Amuse and secondly it was very obvious as to who made what. My father-in-law claims to be able to guess who made the dish of any chef that trained with him at La Cote Basque from the flavor profile and seasoning – I’d love to put this to the test one day. Last night looking at the dishes the chefs were definitely represented on the plate – from the very precise plating of Herrman or the pretty fish dish with just the right hint of the ocean in the glass bowl with his favorite crispy puffed rice from Michael Cimarusti or the contrast of the slightly more free spirit of the ink on the plate with the baby French leeks from Ludo Lefebvre or the vibrant yellow egg yolk dumplings of Voltaggio in a delicate broth or the robust Italian spaghetti with spring truffles from Gino Angelini to the delicate additions of layer upon layer in Josiah Citrin’s dish.

Josiah started off the dinner with the Amuse: A sliver of crisp chicken skin topped with raw milk curd, aged and fermented beets and shaved macadamia. Paired with a small glass of bright green chilled pea soup, a yogurt sphere and a delicate layer of meyer lemon air, that our waiter instructed us to eat in two shots. The pea juice was fresh and light, the yogurt added a note of richness and then the meyer lemon foam a hint of citrus. 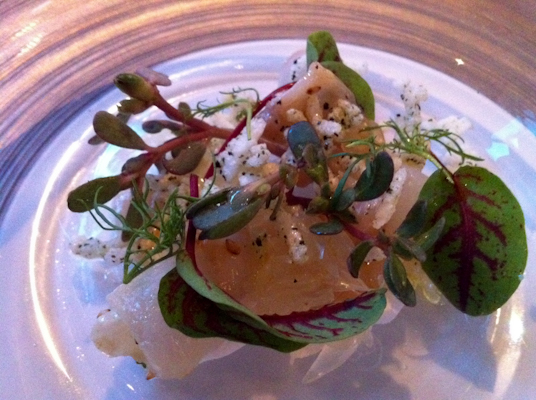 Michael Cimarusti made fluke sashimi, fluke fin and Geoduck clam with creme fraiche, yuzu kosho and crispy puffed rice.  The dish was what I know and love of Michael’s cooking – clean flavors with the perfect balance of acid and salty ocean. This would have been the most obvious dish to guess who had made it for me. 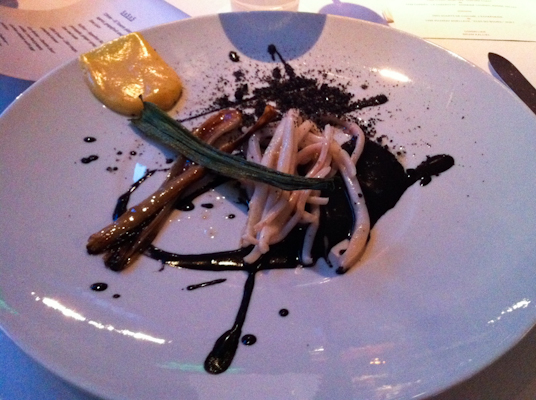 Ludo Lefebvre made Eastern squid with ink, ash and baby french leeks. The white strips of squid were pale against the black ink and ash – and so beautifully tender. This dramatic plate would have thrown you a curve ball given that Voltaggio’s restaurant is ink and he’s all about those ink blots. However, the flavors and technique were very much Lefebvre – the playful contrast of the textures, the daring use of ash, the golden lusciousness of the miso cream and the playful ‘painting’ of the plate Basquiat style. 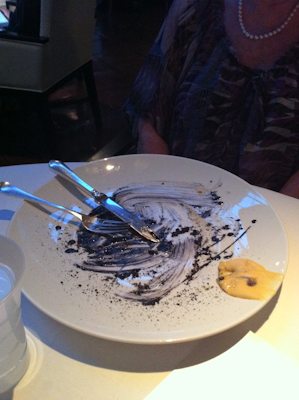 The finished plate of Maman de Ludo – who was a delight to dine with. Krissy Lefebvre and my linguistic skills were put to the test as we translated each dish – and conversed in French. Her highlight of  the night was being invited into the kitchen for a photo avec son fils. 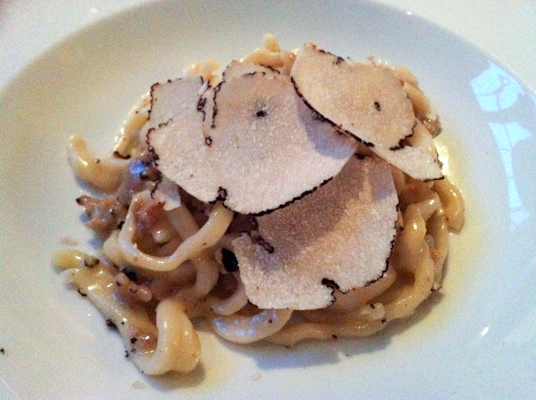 For our next course we moved from France to Italy with a rich homemade spaghetti chitarra alla norcina from Gino Angelini. Under all those spring truffles was a sauce of sausage and Parmigiano-Reggiano. As Donato Poto pointed out as he cleared the plates from our table “We certainly enjoyed the Italian dish.” I could have licked the bowl but I held back on the ciao, Vesper, belissima! 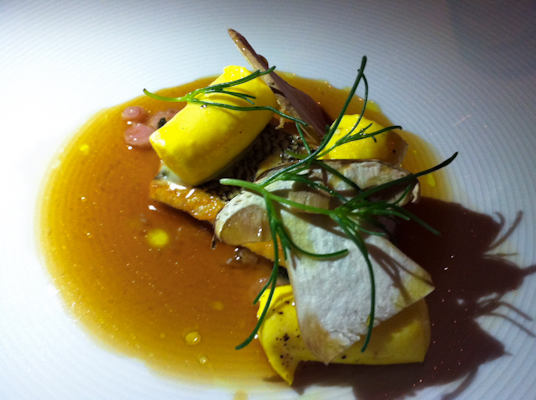 Michael Voltaggio made a wild black bass with egg yolk dumplings and a porcini dashi. The fish was the star of this dish. Light and flaky with just the right balance of flavor. 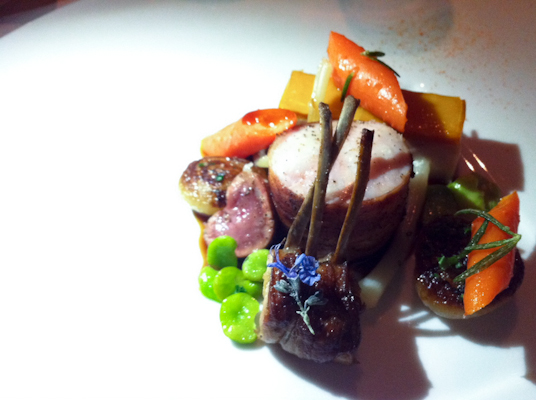 I was really sad I was so full when we were served Rory Herrmann’s dégustation de lapin. It was all I could do to nibble like a rabbit at the sweet carrots, fava beans and young onions. I wished hubby was there to share in this dish as he loves rabbit and I know would have helped me out. You know that the chefs were eagerly watching every plate that returned to the kitchen and would have been disappointed by the amount of meat left on my plate. Sorry Rory, I really was full to bursting by this point of the dinner. 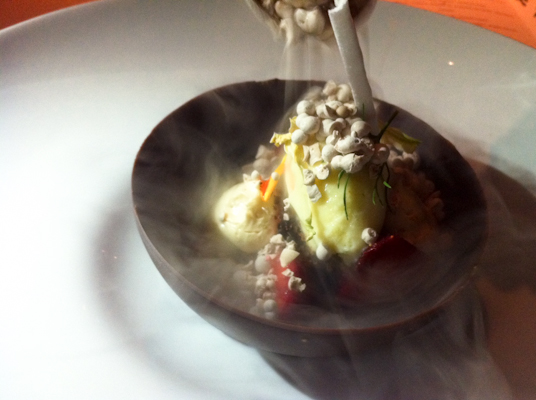 For me to not be licking the dessert plate clean was another indication that I was just too full – I should have held back and not finished Gino’s pasta! Ken Takayama, who works at Mélisse for Josiah Citrin, made a deconstructed strawberry shortcake with caramel, wild fennel and a pretty chocolate cup. The waiters poured in a consomme and then added the smoking white pearls on top. I love the movement in the photo of this dish. And yes Krissy outed me on facebook – I did have to top my dessert with pop rocks – I don’t leave home now without a small packet. When I gave them to Alain Ducasse’s operations manager last week he said in a thick French accent “What is happening in my mouth?”

The menu was signed by all the chefs at their sit down pre-service and as you can see there were 7 chefs in the kitchen for this special night as well as the regular Mélisse kitchen crew:

So there you have it a tour de force of gastronomic cooking – Los Angeles’ creme de la creme of the kitchen – collaborating for a series of dinners and proving that fine dining is alive and well in this city. Next up Providence, May 21st- which I believe is sold out but worth adding your name to the waiting list if you can.