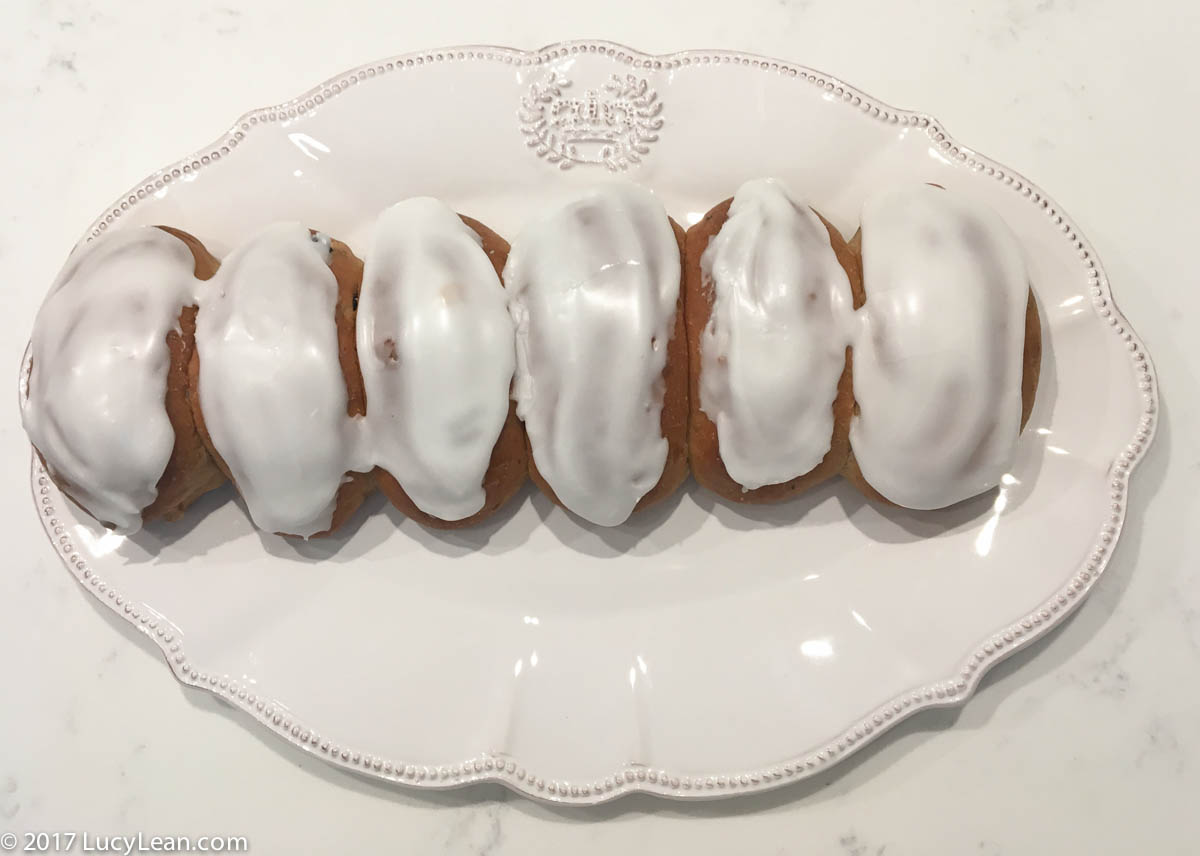 Reading Kay Plunkett-Hogge’s book Adventures of a Terribly Greedy Girl I was reminded of a boarding school classic teatime treat – Sticky Willy – the giggle inducing name for an iced finger.  As Kay said when I told her I was baking up a batch of sticky willies, “Everyone loves a sticky willy.” Oh yes they do! These were the treats of boarding school when food we wanted to eat was scarce and yes we sniggered at the name and the double entendre but I suspect we were giggling in that rather English way because it was naughty, and nice.

Saucy, rather than Blue, Risqué, not Vulgar

British humor is full of these kinds of silly schoolboy/school girl giggles – from the Carry On Films back to P.G. Wodehouse, from Monty Python to the Vicar or Dibley and everything in between. Being British we’d titter at the innuendo without being offended. Jokes that rely on a  double meaning are a staple of British humour. They are saucy, rather than blue; risqué, not vulgar. They are the enduring theme of that peculiarly British comic institution, the Carry On films. As the Ides of March approaches the infamy joke in Carry on Cleo seems apropos – with Kenneth Williams as Caesar:

“Infamy, infamy, they’ve all got it infamy!” Carry on Cleo 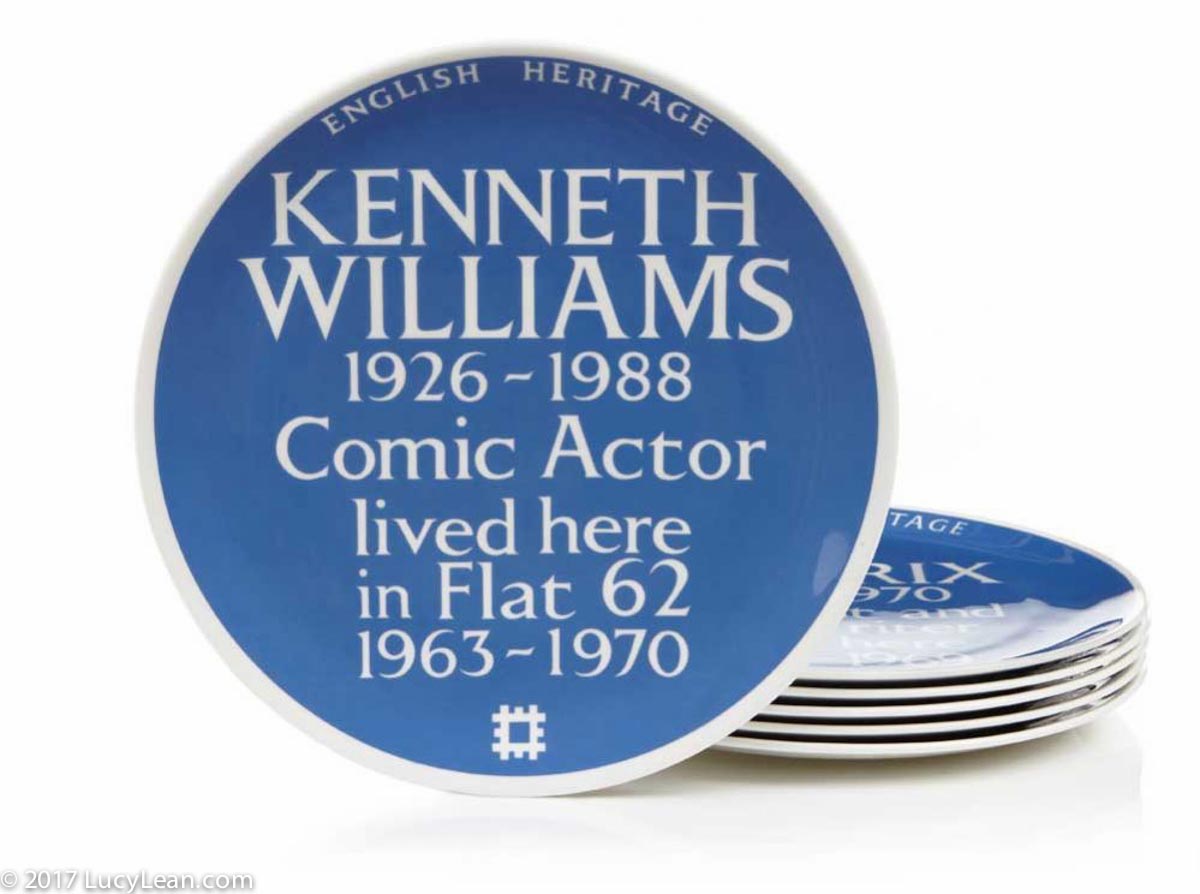 I recently purchased a set of English Heritage blue plaque plates – yes English Heritage do ship to the US – one of them is for Kenneth Williams so I used this plate whilst making the sticky willies – I think he would have approved. Usually it sits on the nightstand in my guest house at the Beach House. 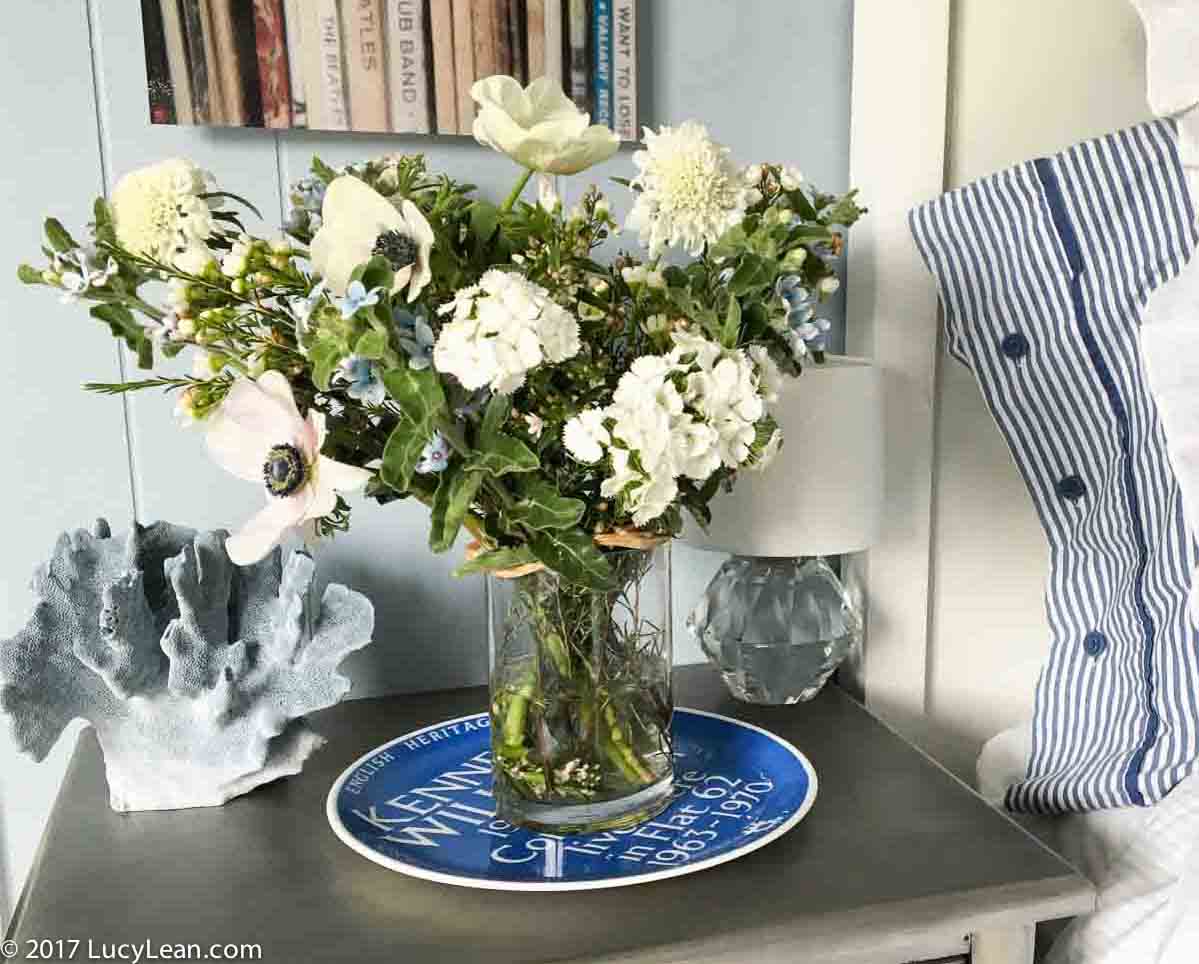 Although, whilst researching this story I read some of Kenneth Williams’ diary – he’s a curmudgeonly old fart who didn’t have a nice word to say about anyone really. Highly amusing.

“Went to see Dr Zhivago directed by David (dreary) Lean. Starring Omar Sharif. This may be the Great Russian Novel but it’s a pain in the arse as a film.”

Maggie Smith, a friend of Williams, once claimed her entire career was an impression of him.  It makes watching her as the Dowager Duchess in Downton all the more interesting – watch it and think of Kenneth Williams in drag and I promise you it will never be the same. “What’s a weekend?” being my favorite line. And her opinion on cocktails – “They look far too exciting for so early in the evening.”

Perhaps my favorite British comedy writer is P.G. Wodehouse (and yes he does have an English Heritage Blue Plaque but sadly no plate).

If you aren’t yet a fan I hope I can soon light a fire. Americans are probably most familiar with Stephen Fry and Hugh Laurie in Jeeves and Wooster but I think I’m more partial to Lord Emsworth who has been played by Peter O’Toole, Ralph Richardson and most recently Timothy Spall. The Blandings set live in a large stately home, in the English countryside.  His characters are wonderfully silly, use Edwardian phrases and silly names and poke fun at the upper-classes. Think Maggie Smith in Downton Abbey only funnier and sillier and never taking itself so seriously. In Downton they will eat Mrs Patton’s scones and Victoria Sandwich but Lord Emsworth would definitely eat Sticky willies for tea at Blandings if he hasn’t feed them all to the Empress of Blandings to fatten her up.

Blandings Castle is one of those pastoral shrines in English literature whose characters – Lord Emsworth, Galahad (“Uncle Gally”) Threepwood, Lady Constance, the secretary Rupert Baxter, Beach the butler, and Angus McAllister, the Scots gardener – have never tasted the forbidden fruit (though they may have chucked a few flower pots). Yet more blameless and complicated, their domestic dramas revolve around the life and times of the Empress of Blandings, a prize pig. (The Guardian)

So imagine my delight when I found this clip from the TV show of Blandings which features the infamous sticky willies.

Sir Gregory gives the Scottish gardener, McAlister a sticky willy “Go on, have a large one.”

“Well, I’m sure we may consider you untainted.” 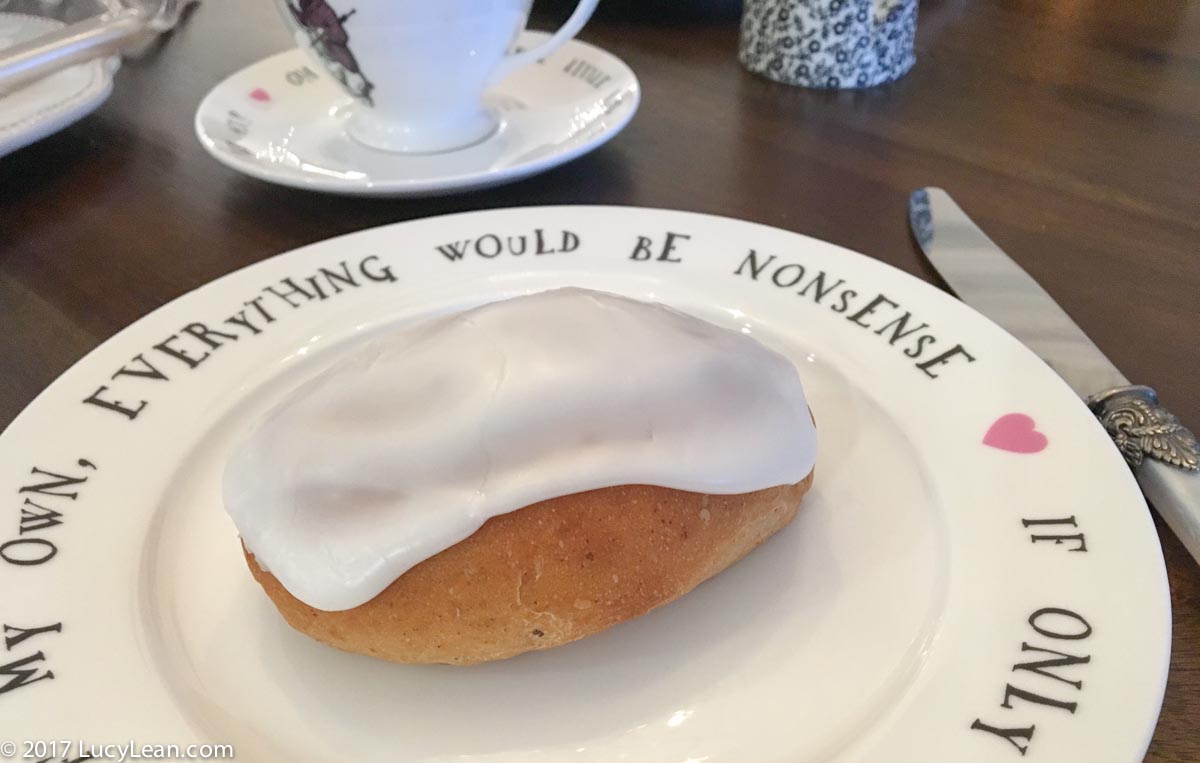 I like to use a spiced bun recipe – I’m sure a purist would want the really bland soft white bread bun that was a vehicle for the icing and not much more – but I prefer to spice up my sticky willy.  Like my favorite buns from Marks and Spencer that I eat enough to last me through the year when I’m back in England – if anyone’s feeling kind all I really want in life, apart from a sticky willy,  is a spiced M&S bun and a cup of tea, followed shortly after by some chicken crips and a glass of rosé champagne!

My sticky willies also have raisins – and no this doesn’t make my sticky willy a spotted dick – that’s another English delicacy that I’m sure would be enjoyed at dinner at Blandings with lashings of custard.

Sometimes sticky willies had pale pink rather than white icing – feel free to add a couple of drops of pink food coloring if you desire. 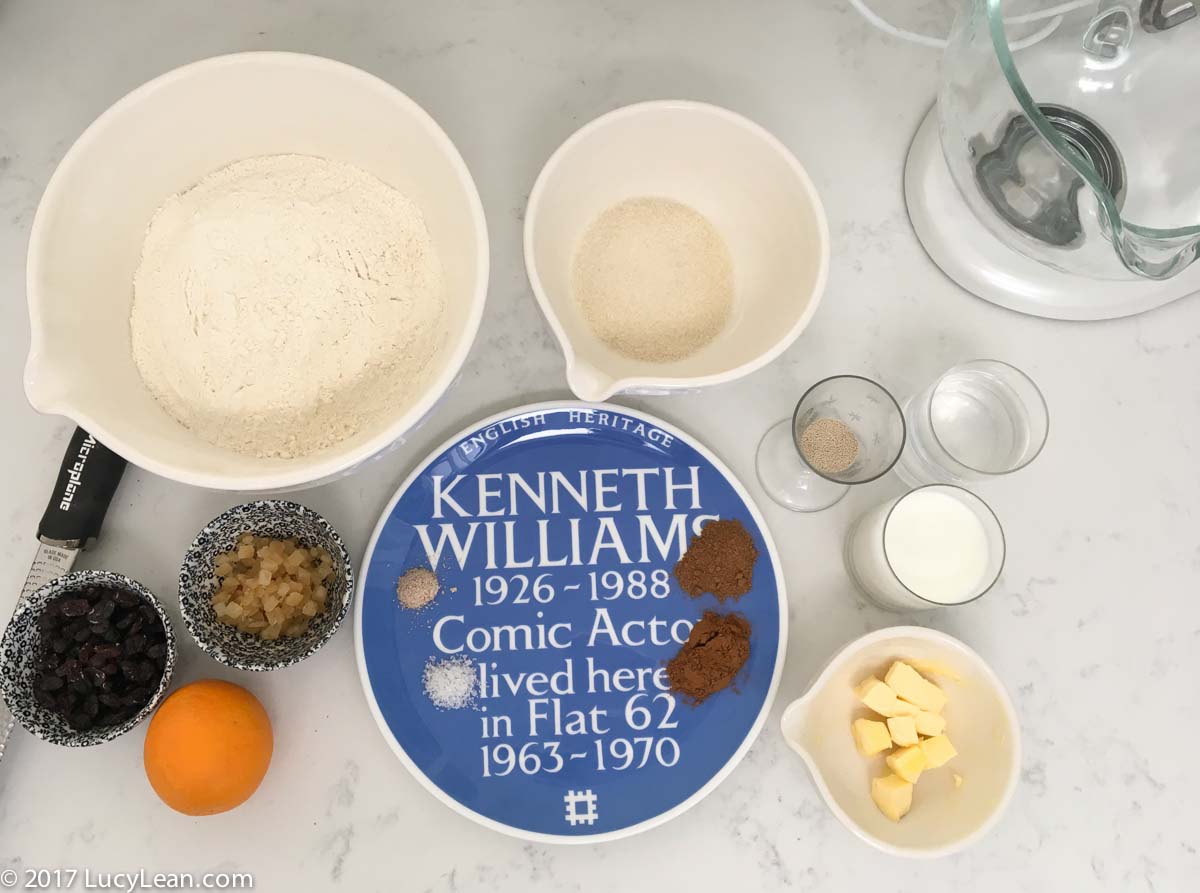 1. Line a large sheet pan with parchment paper and lightly butter. Place a piece of plastic wrap over the buttered paper to transfer some of the fat. Set aside.
2. In the bowl of the Kitchenaid electric mixer mix the flour, salt, sugar and spices. Add the butter and rub in with your fingertips. Stir in the yeast and dried fruit and mix to combine.
3. Place the milk and the water in a jug and heat to 95-100 F. 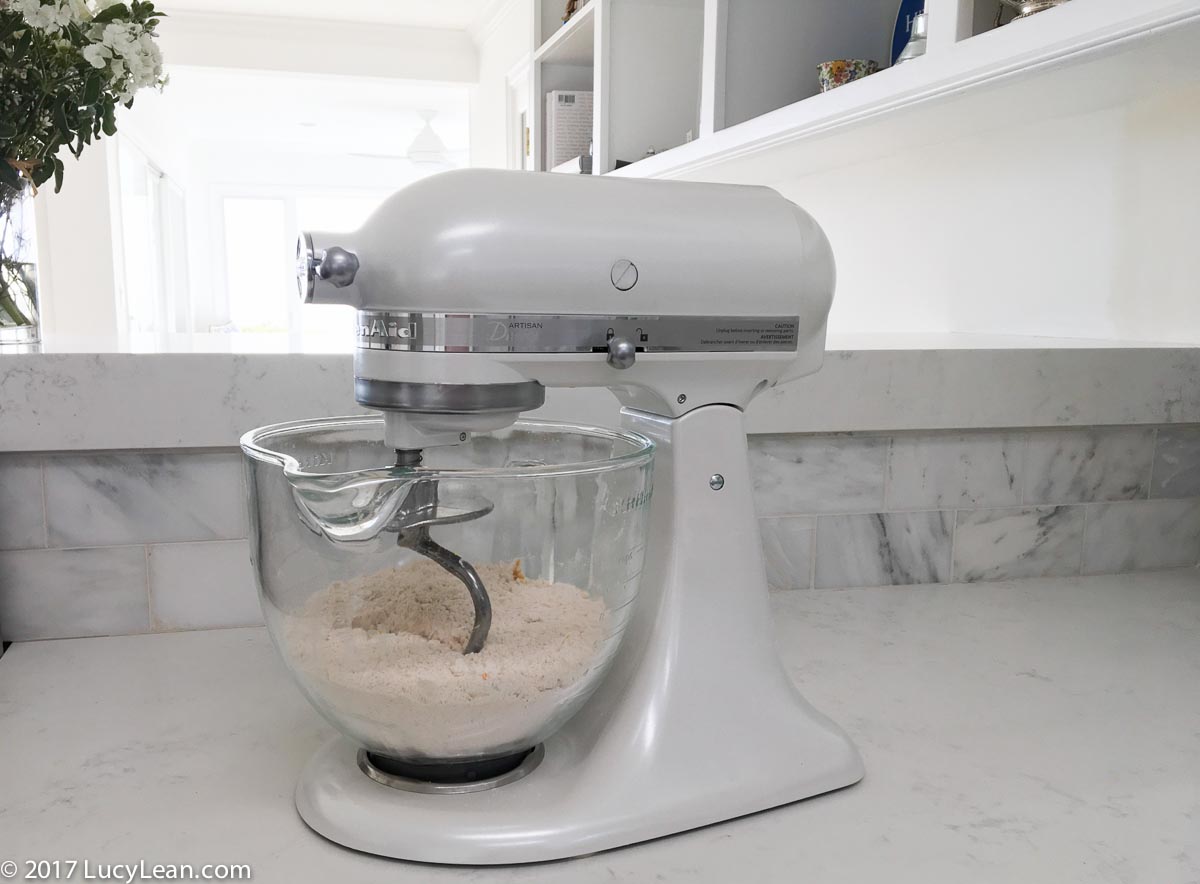 4. Fit the bowl of the electric mixer in place and using the dough hook stir in 3/4 warm milk/water – slowly add the remainder of the milk/water mix, enough to make a sticky dough. Continue to knead on medium speed for about 3-5 minutes until the dough becomes smooth and no dough remains stuck to the sides of the bowl. You will hear the dough come together and lose the sticky consistency as the gluten is released. 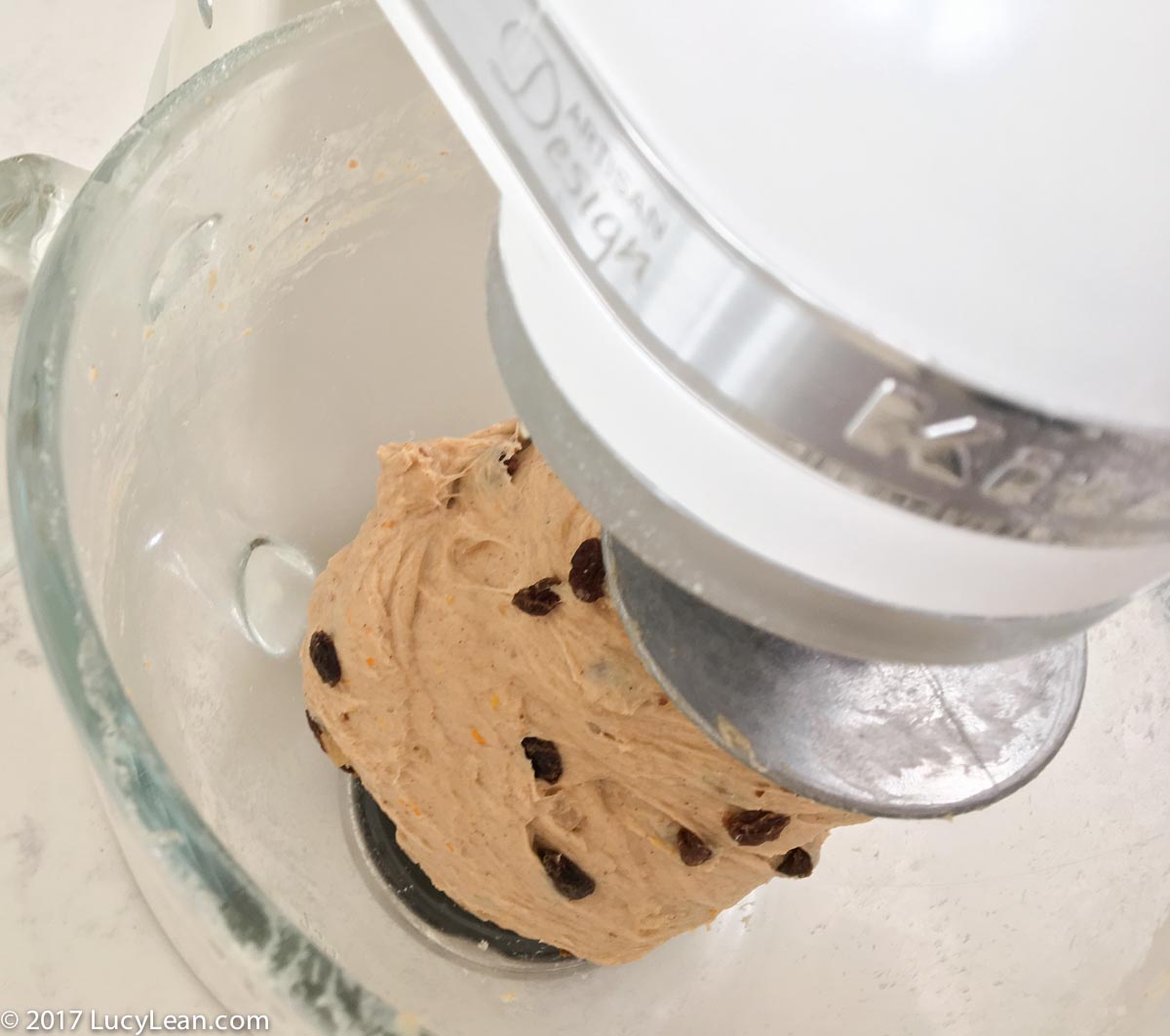 5. Divide the ball of dough half.  Then divide the halves  into 6 equal little balls, to make a dozen total. Okay this would be where we would get the giggles if it were home ec class and we were making sticky willies and the teacher would instruct us to make balls. Go back over each ball and work each of the 12 pieces, pulling the sides down and tucking them under to form a neat ball. Then roll out the ball to form a sausage/willy about the size of two fingers and lay out in a row with a little space between on the lined sheet pan.. 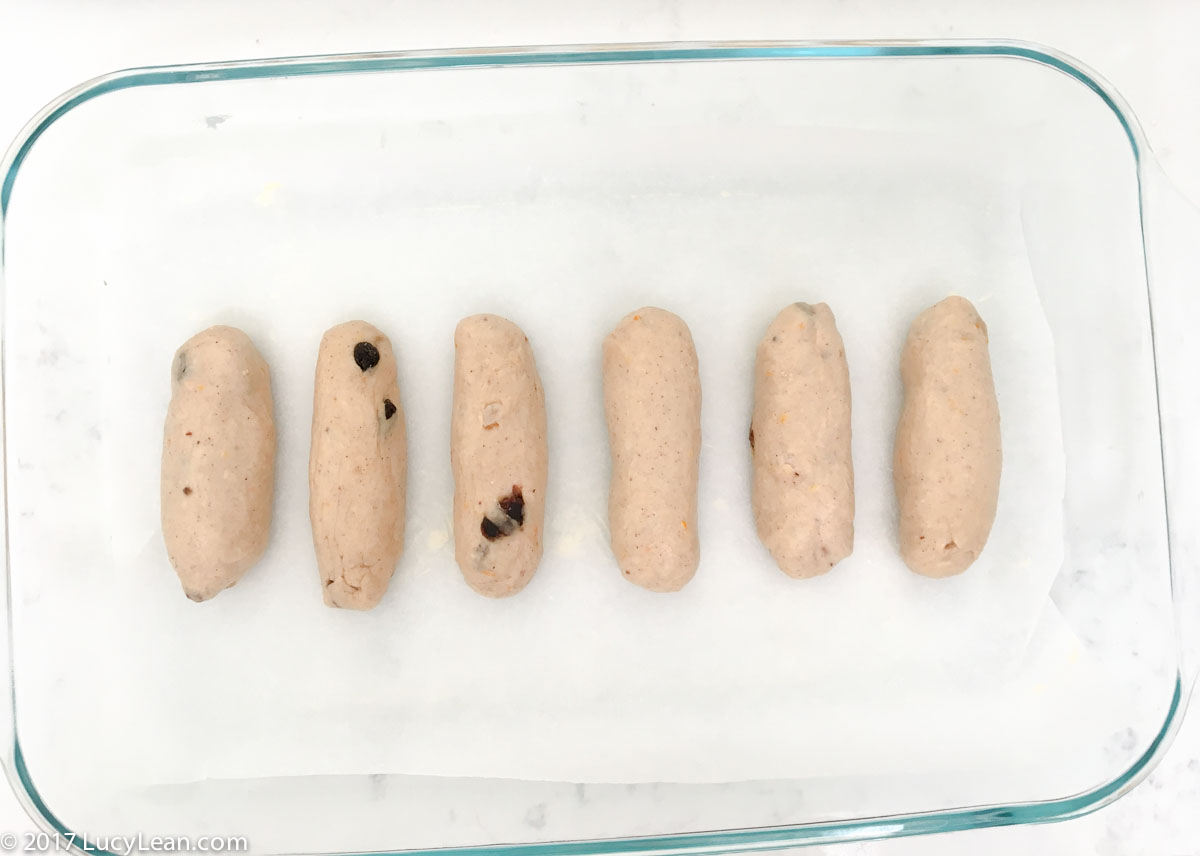 Cover with the buttered plastic wrap and leave to rise for 1 1/2 hours. The willies will double in size and rise into each other. 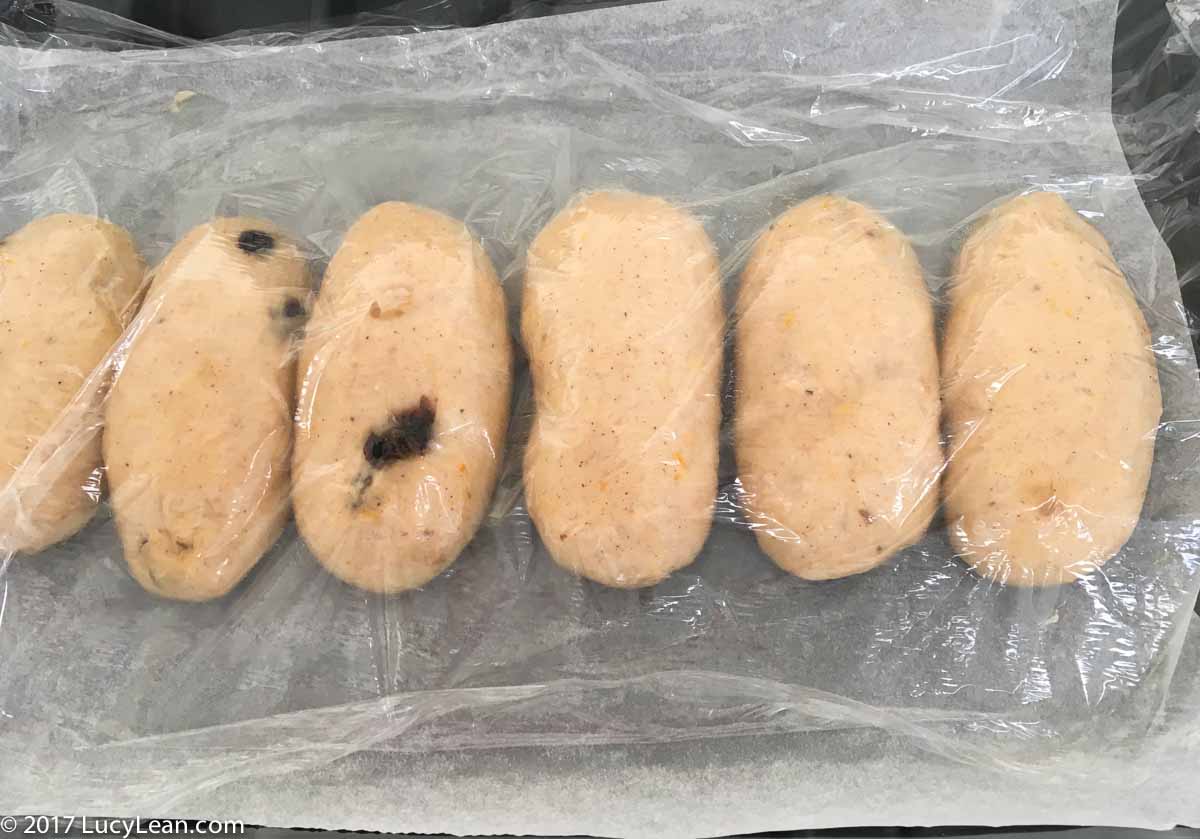 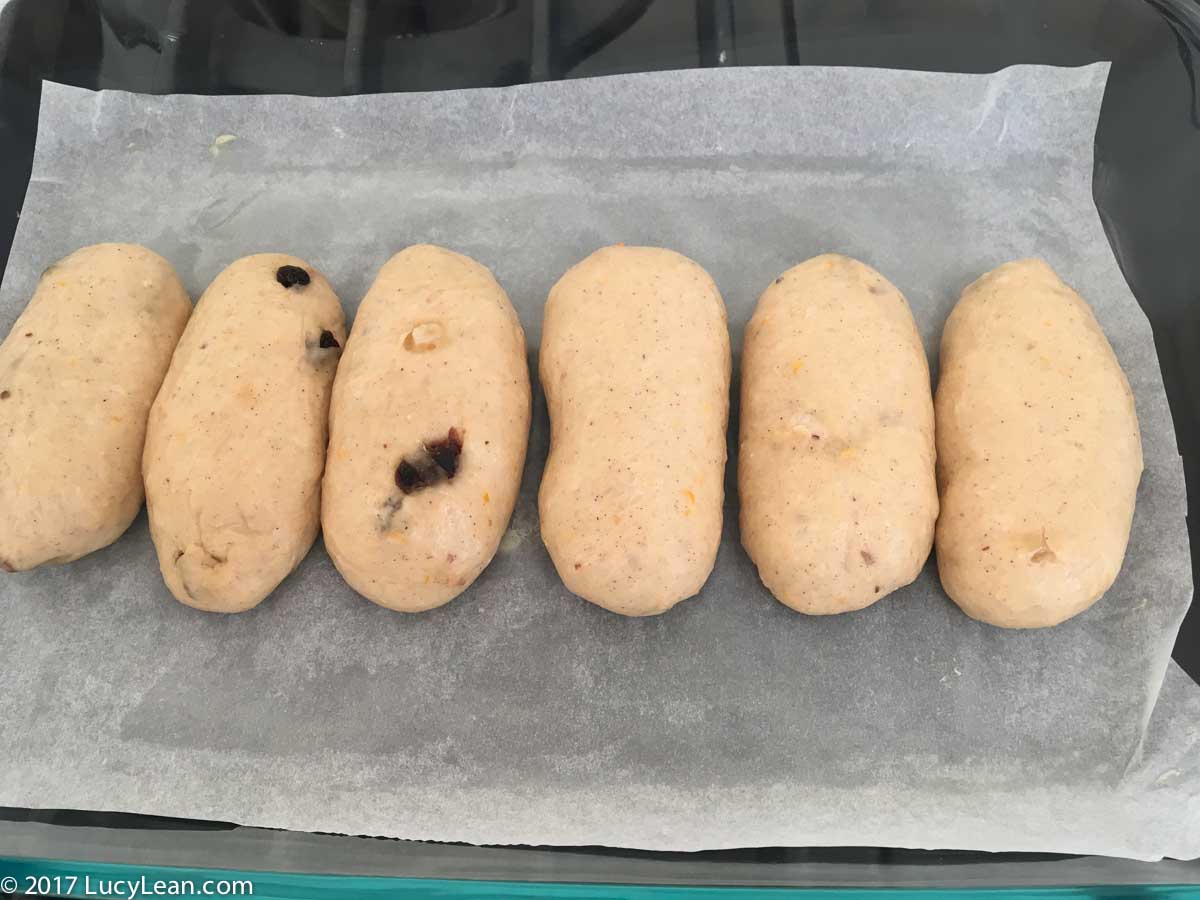 7. Bake for 15 minutes or until golden brown. They should sound hollow when tapped. 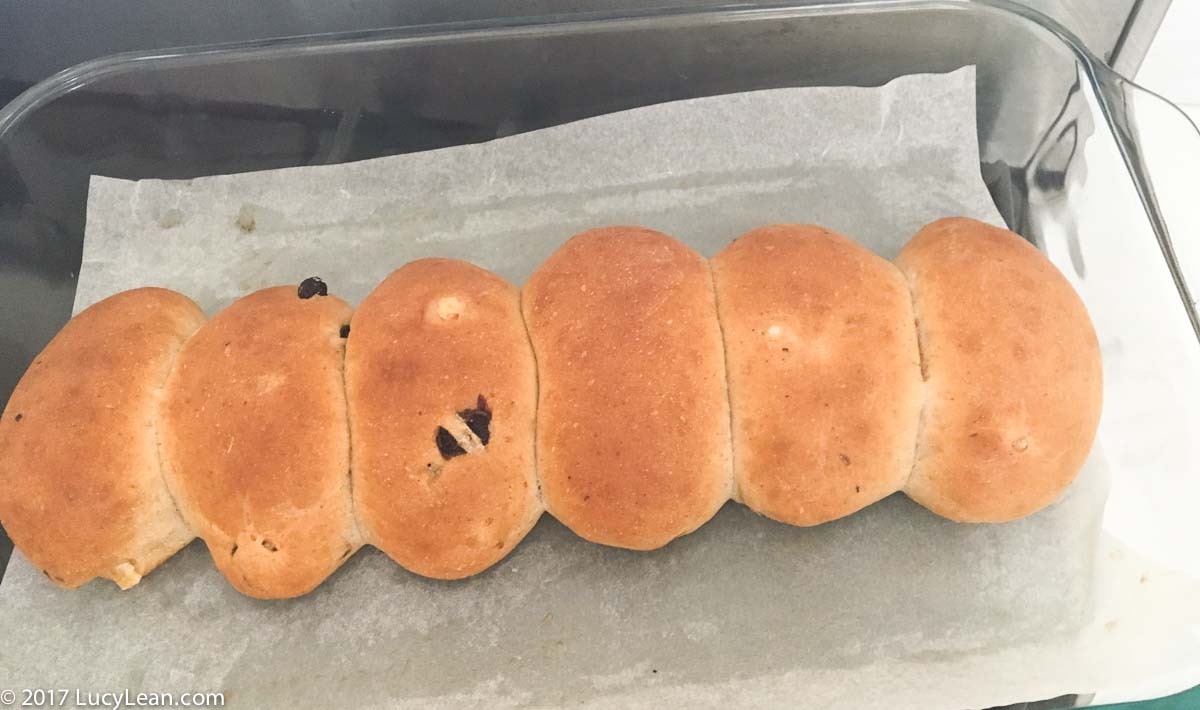 8. Transfer the willies  in the parchment paper to a wire rack and let cool completely. 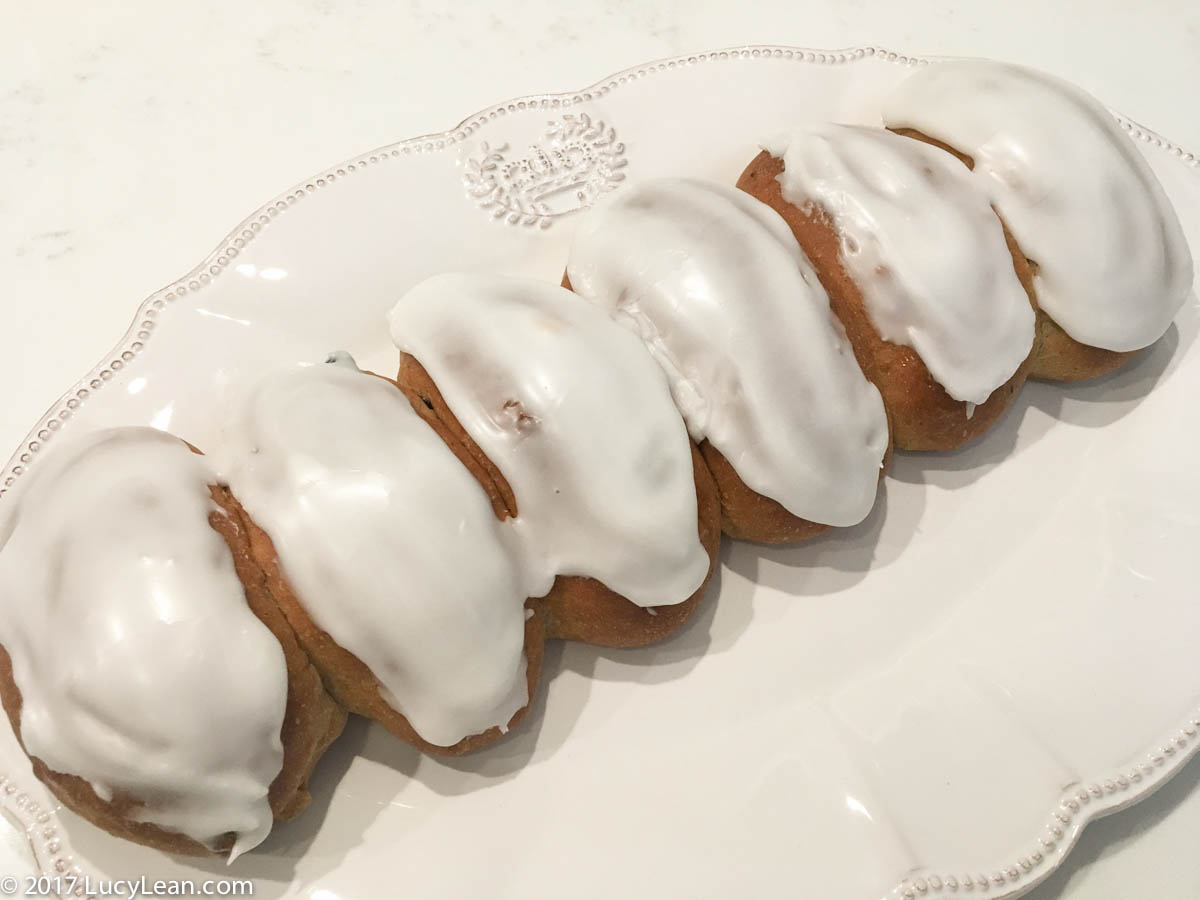 9. When the willies are completely cold mix together the confectioners sugar with some water, added 1 tablespoon at time to mix into a paste, the goal is an icing that won’t drip but is easy to spread. With a teaspoon cover the top of each willie and enjoy with a cup of tea – more tea vicar?! 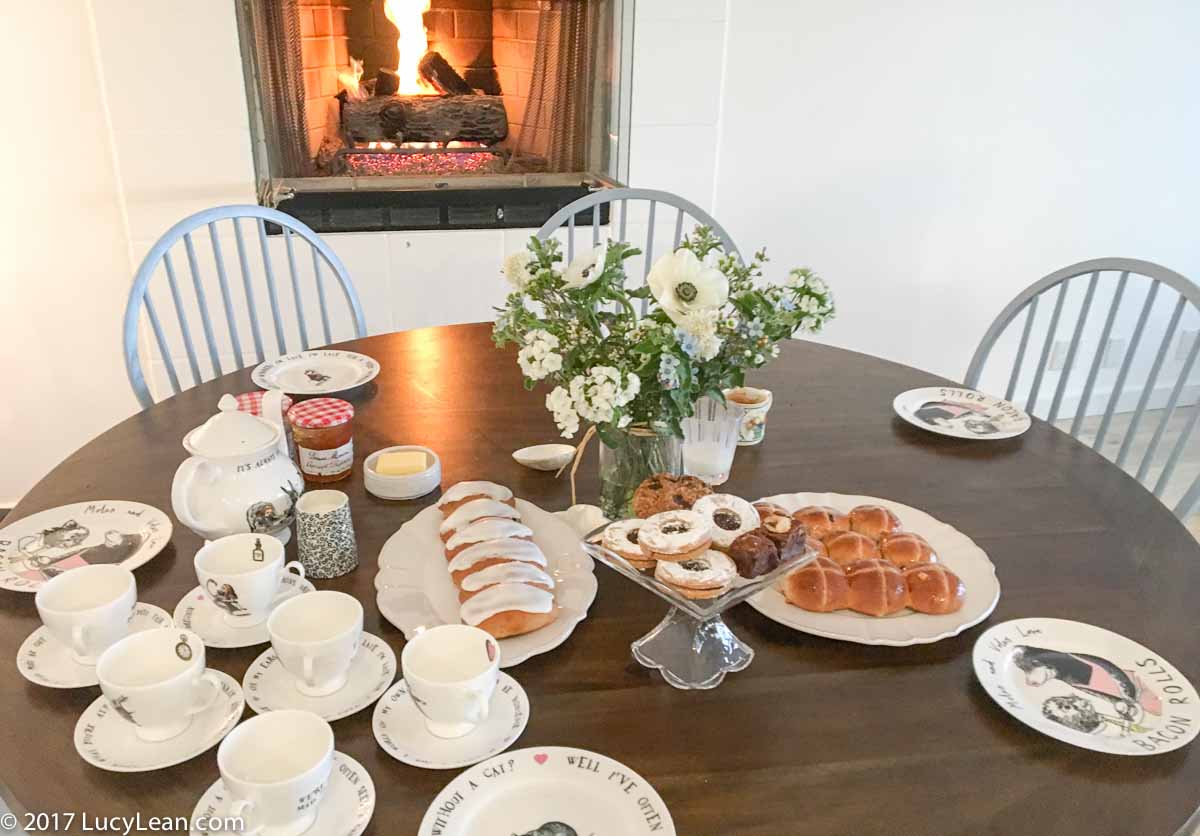 Let me know if you remember this tea time treat in the comments section below – and do you prefer pink or white icing on your sticky willy?