Is it possible to have a perfect red velvet cupcake without all that disgusting dye? 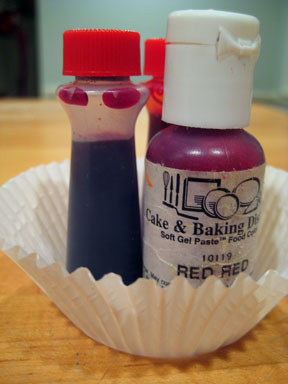 In one of those synchronous moments that happen a lot in the food world, Joan McNamara from Joan’s on Third asked me if I knew of a good recipe for red velvet cupcakes that doesn’t contain vast quantities of red food coloring. It so happens that I was looking at the wonderful Kitchen Garden Cooking with Kids by Stephanie Alexander and thinking I would make her beetroot muffins. Which then lead my down the rabbit hole of what makes a muffin and muffin and not a cupcake? Could I adapt Alexander’s recipe and add frosting to make red velvet cupcakes?

Beets may be an unusual ingredient in delicate cupcakes but they make them moist and chocolaty – the kids don’t know – and they give them that sort after red color without having to use 2 bottles of dreaded food coloring. Paired with the cream cheese frosting recipe from Sprinkles what could be better?

As hard as I try I can’t get these cupcakes to have that intense red color – the beets give them a subtle red tinge – but the cakes are light and moist and once covered in frosting you can’t see the cake part anyway. I haven’t had any complaints. Best of all the kids are getting some veggies!

1. If you insist on using fresh beets from the farmers’ market remove the beetroot tops and boil for 15 minutes. Take out of the water and cool. Use a potato peeler to remove the skins. If you have access to a Trader Joes save yourself dyed hands and the hassle and pick up a box of pre steamed and peeled beets – no one will know and I won’t tell.

2. Place beets in the blender and purée. Set aside 1/3 cup to cool further.

4. Sift together the flour, cocoa powder, salt into a medium bowl and then sift again into a second bowl and set aside. [This is called double sifting]

5. Using an electric mixer with the whisk attachment cream together the butter and sugar until pale and fluffy. Add the egg and then add the pureed beets and vanilla.

6. In a separate mixing bowl mix together the sour cream and buttermilk.

7. Alternate adding the dry ingredients and the sour cream/buttermilk to the batter in two steps.

9. Put the baking soda in a small bowl and add the vinegar to it. Gently fold this foaming mixture into the cupcake batter.

10. Using an ice cream scoop place the batter into the center of the cupcake cases  – you don’t want to over fill, about 2/3 of the way up is perfect.

11. Bake for about 15 minutes until the cupcakes are well risen and springy to the touch. Remove from the oven and allow to cool on a wire rack.

1. Blend cream cheese, butter and salt until smooth and creamy.

2. With mixer on low, gradually add powdered sugar until incorporated.

3. Gradually add vanilla, and mix just until incorporated. Do not over-mix or mix on high speed because it will incorporate too much air. The frosting consistency should be creamy and dense, like ice cream.