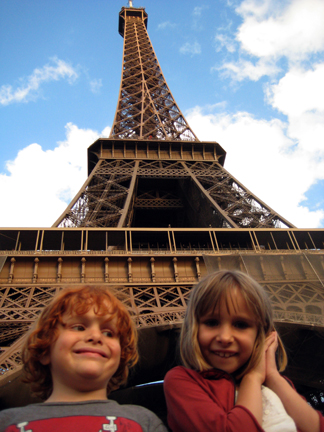 In true French fashion you may have noticed that we took August off!

Like Parisian restaurants Ladles and Jellyspoons was closed for the month as we took part in the embarquement and headed south on the TGV from Paris Gare de Lyon to Avignon. Time to unwind away from the daily grind of posting.

This is not to say we all stopped shopping, eating and cooking – far from it – in the last month we have all explored food from every angle and our taste buds are bursting from flavor overload, every sense satiated and exhausted from the workout that was Paris, Provence, New York and the Hamptons. We have so much content to come I hardly know where to start – but start I will. Let’s start at the very beginning a very good place to start! Our supper on the Eiffel Tower:

We arrived late in the day having travelled along the Seine on the Batobus and clouds were gathering. Choosing to skip the hour long wait for the lifts we waited 10 mins for a ticket to walk up.

The stairs are not for those who suffer from vertigo – like me! As the kids raced up the stairs I focused on my feet – putting one in front of the other and not daring to look either side at the ever increasing distance between me and terra firma.  Let’s just say I was very relieved to get to the first stage and away from the edge. 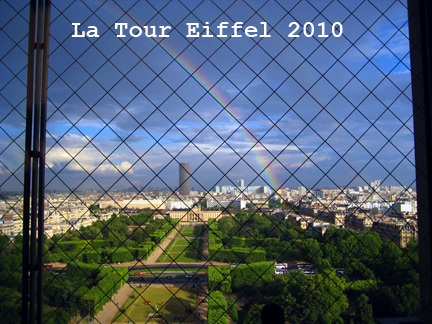 A rainbow from the premiere étage of la tour eiffel

As we looked out over the city and I got my breath and nerve back a beautiful rainbow appeared – the drizzle we had encountered on the climb was quickly forgotten as the sun cam out between clouds.

Minty watched enviously as people dressed for dinner continued up to the Jules Verne restaurant as we opted for a simple sandwich. Rémy – jambon et beurre and Minty thon avec les tomates. 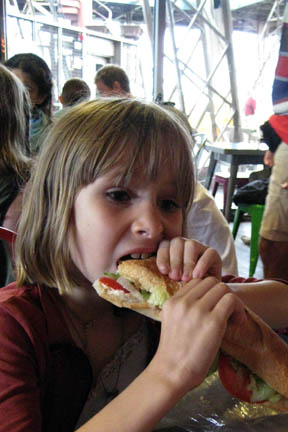 And for dessert? Chocolate Beignets!!! 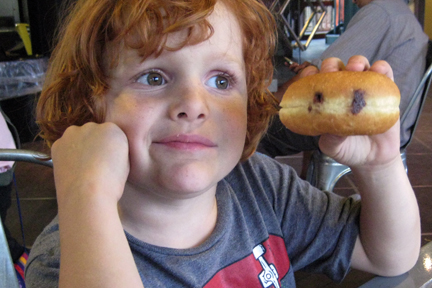 Back home I am searching for the perfect baguette, ham, tuna (in olive oil) and tomatoes to make this for the first school packed lunch – I have 3 days to complete my mission.

Cut the bread lengthwise and butter both sides generously. Layer the ham and close up. Rémy enjoys a couple of cornichons on the side.

1 small can of tuna fish in olive oil

Slice the baguette lengthwise, butter generously on both sides layer the tuna having drained off the excess oil then finish by layering on sliced tomatoes. Sprinkle with fleur de sel and grind some pepper on top before closing it up.