David Lean – my Great Uncle – would have been surprised at how the focus has shifted away from celebrating the art of the film maker and more towards all the brands now clamoring to get a piece of this glamorous event.  He was a humble man and a great listener – you can see this when he accepts his award.

Here’s Sophia Loren presenting the Oscar for best direction to David Lean for Bridge on the River Kwai. It was the first of two oscars he won for Direction – today being the Academy Awards I’m filled with admiration and pride at the body of work he created – what a remarkable career. Obviously Sophia Loren claims pasta as her secret weapon – wonder what David would have said?

Looking back at footage of acceptance speeches and old Academy Awards I’m struck by how beautiful everyone looked – the feathers, fur, diamonds and pearls on top of satin and silks brings out the best in every woman regardless of size and shape – although admittedly they are all pretty thin.  Tall and short, fat and thin – everyone looked FABULOUS. The men, not to be out done by their sparkling dates, look dapper in their black ties, well cut suits and a head held high swagger.  Oh, if only we could all make more of an effort and dress up more often.

Lauren Bacall, the goddess of the screen would have been horrified with the dumbing down of “Who are you wearing” and so today my question to her would have been what are you cooking?

What would these glamorous people of the Golden Age of cinema eaten back in the 1950s. A little research and this is what I found: Lauren Bacall’s recipe for watercress soup and Dean Martin’s burgers… both from my favorite little book The Celebrity Cookbook– a gift from my friend Artcook. 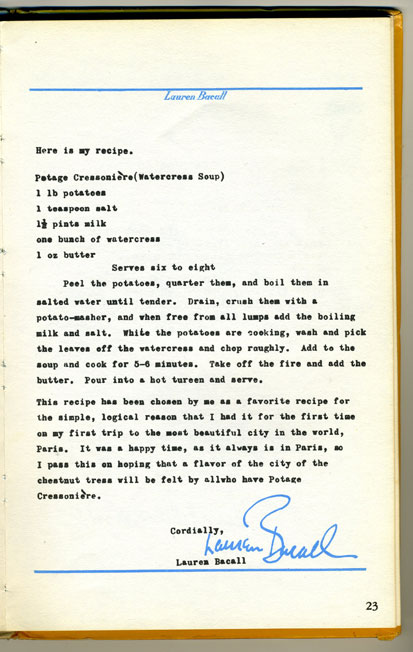 Here is my recipe:

Peel the potatoes, quarter them and boil them in salted water until tender. Drain, crush them with a potato-masher, and when free from all lumps add the boiling milk and salt. While the potatoes are soaking, wash and pick the leaves off the watercress and chop roughly. Add to the soup and cook for 5-6 minutes. Take off the fire and add the butter. Pout into a hot tureen and serve.

This recipe has been chosen by me as a favorite recipe for the simple, logical reason that I had it for the first time on my first trip to the most beautiful city in the world, Paris. It was a happy time, as it always is in Paris, so I pass this on hoping that a flvor of the city of the chestnut trees will be felt by all who have Potage Cressoniere.
Cordially
Lauren Bacall 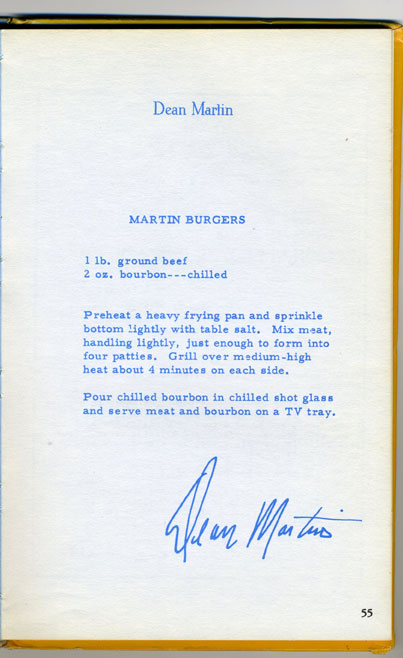 Preheat a heavy frying pan and sprinkle bottom lightly with table salt. Mix meat, handling lightly, just enough to form into four patties. Grill over medium-high heat about 4 minutes on each side.
Pour chilled bourbon in chilled shot glass and serve meat and bourbon on a TV tray.

« How to Make the Best Burger EVER!
Grilling with All-Star Chef David LeFevre »