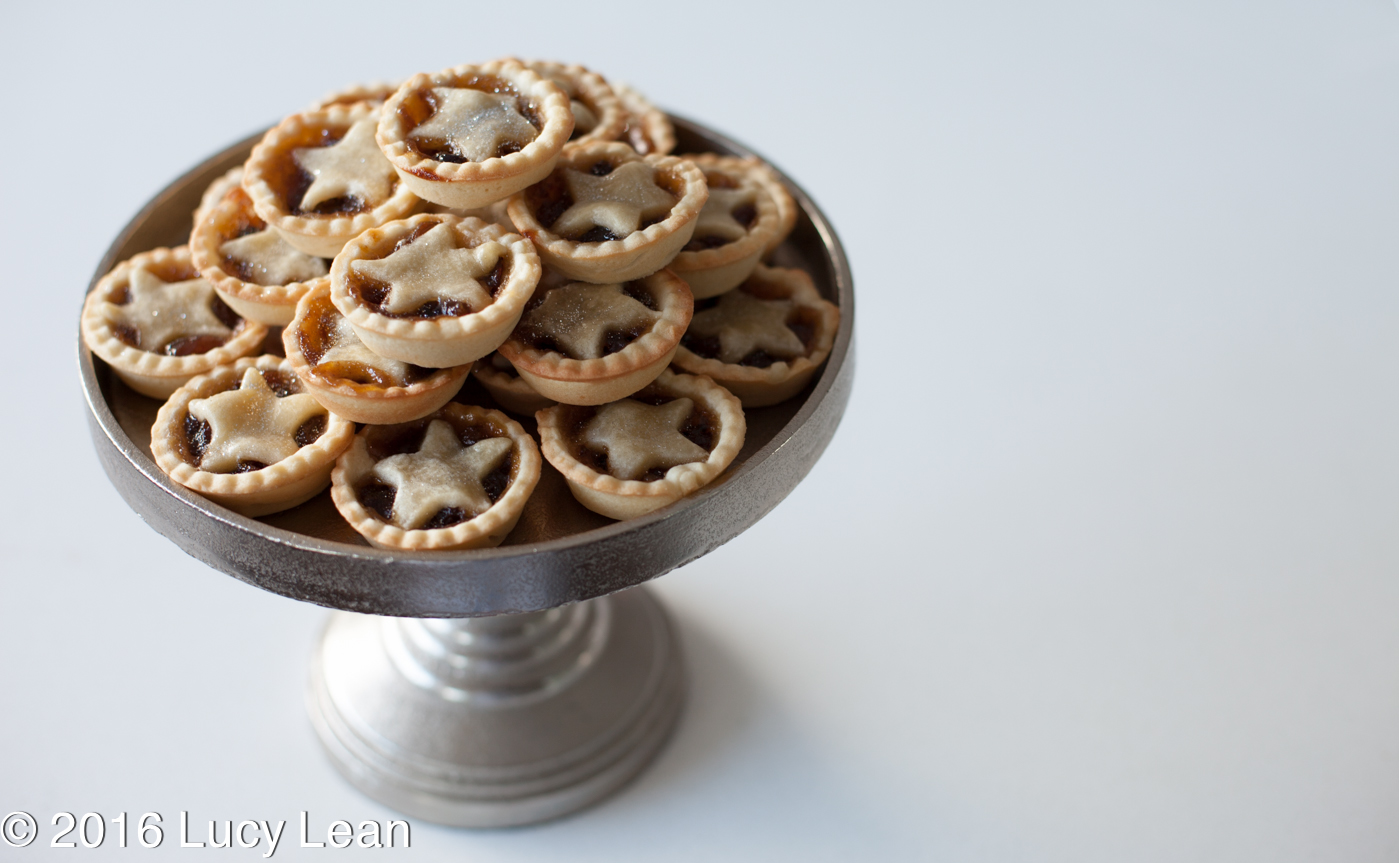 Everyone knows I’m a big fan or mini-mince pies with a star on top – it’s a huge part of our British Christmas.

This year for British Thanksgiving – on the Sunday after Thanksgiving – I brought mince pies – two different kinds – Traditional and Gluten Free – as I knew our host was gluten free. Given how far the development of GF flour has come I was pleasantly surprised with the results. The traditional pies had stars and the GF pies had a little leaf.  Both were equally delicious and you’d have a hard time telling one from the other. 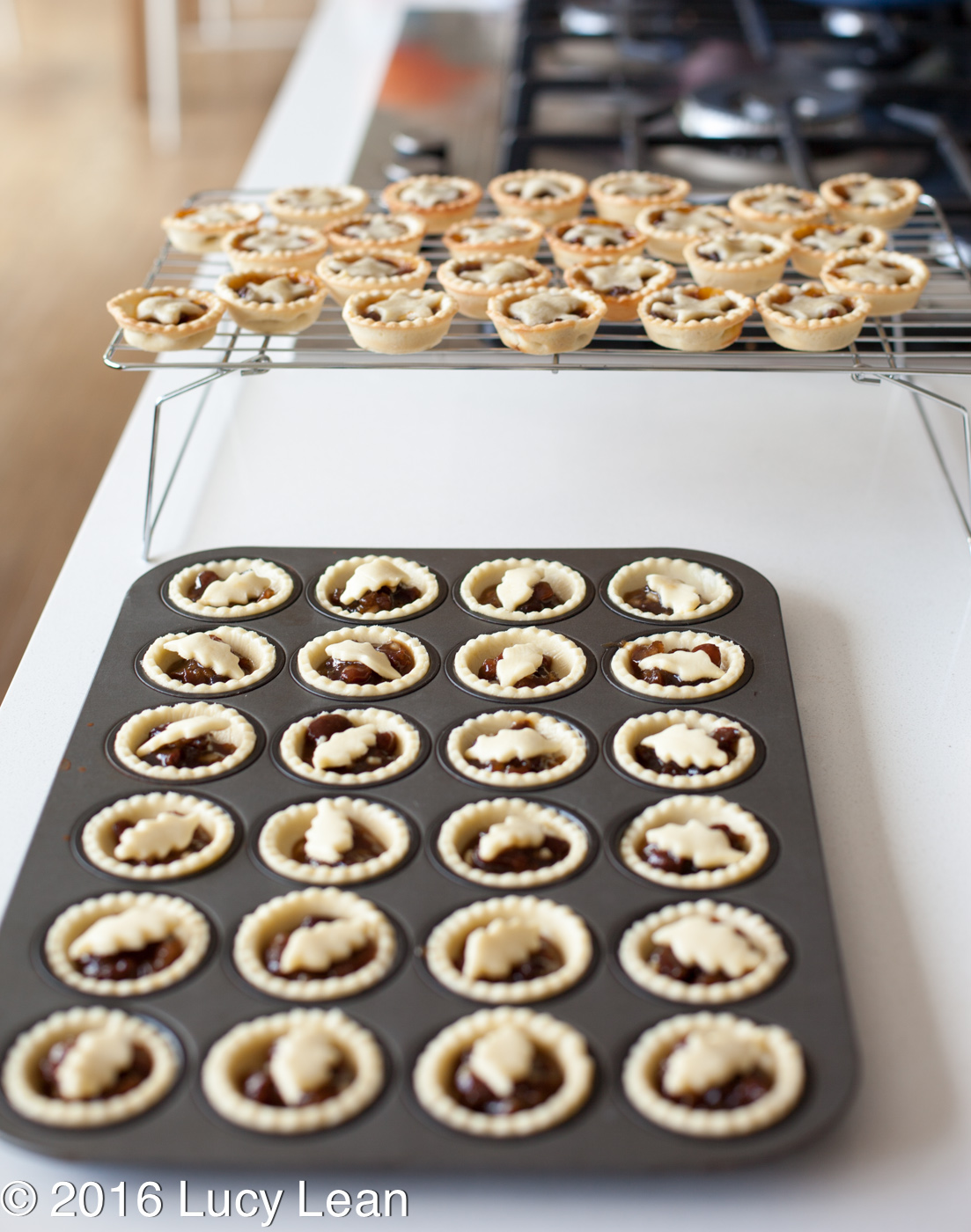 One of the things about a recipe you return to over and over is that you get very lax at the precision – a little of this and some of that – stir it all up et voila!  So adapting the mince pie dough recipe to gluten free forced me to be a little more scientific with the recipe and find out the exact weights for the ingredients. I think these are the perfect mince pies – two bites of sweet filling with just enough pastry to make a neat little pie but not too much so as to be cloying. I’ve moved away from a flaky shortcrust pastry to use pâte sucrée, a sweet dough enriched with egg, that bakes up more like a cookie -and it’s the basis for the gluten free version. I substituted Cup 4 Cup, the French Laundry GF flour for AP flour but using the scale rather than cups. 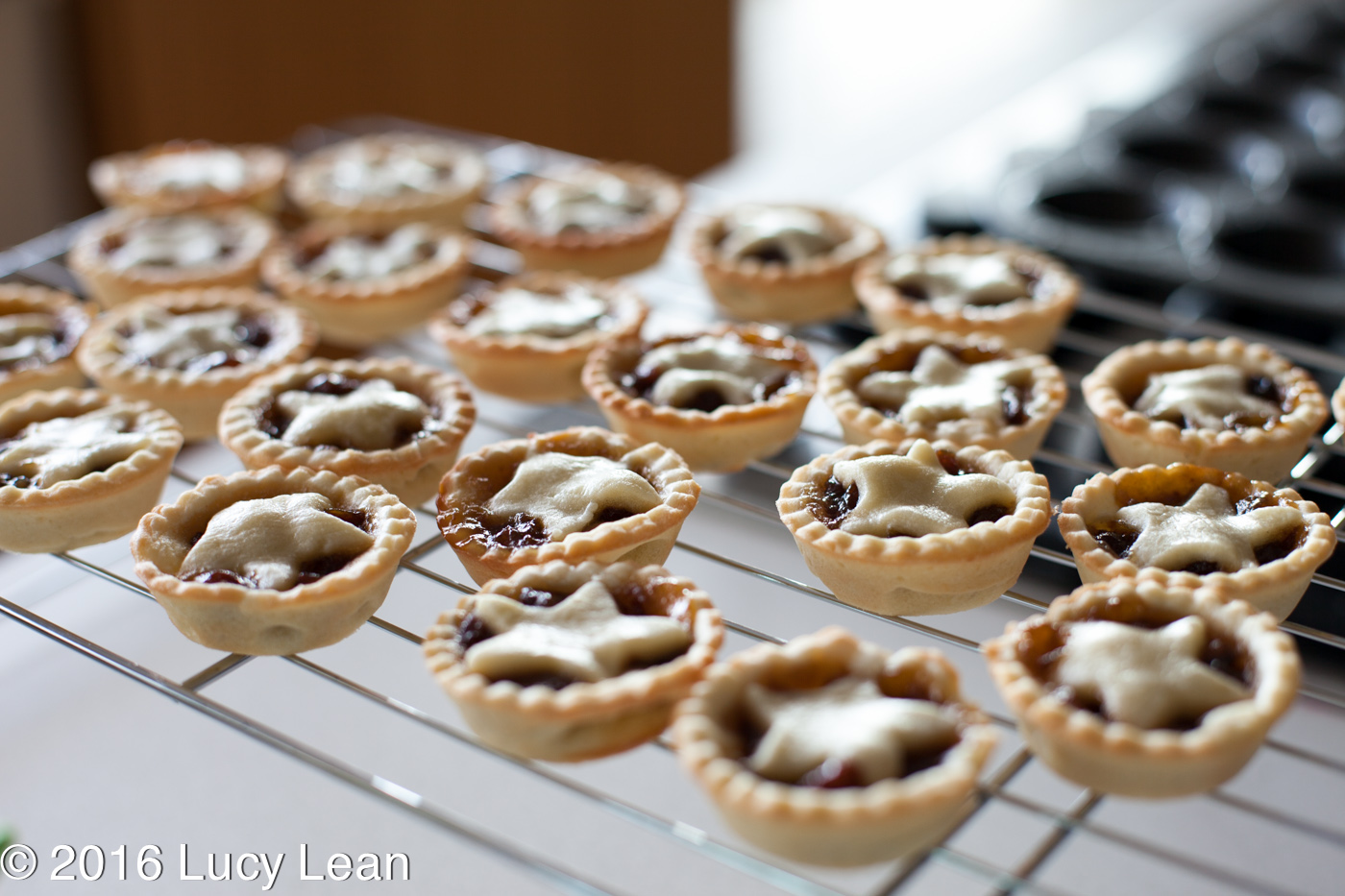 Let’s be clear these little sweet pies have no meat in them – the word mincemeat comes for medieval England when spices brought back from the Crusades were mixed with fruit and shredded meat and put into pies – traditionally eaten at Christmas time, sometimes called manger pies. Over hundreds of years these pies have shifted from savory to sweet and the mince meat has disappeared – and have become classic Christmas treats.   The secret to a great mince pie according to Yotam Ottolenghi is to make the filling in the summer – well the second best filling is to add Rémy Martin cognac to a jar or Robertson’s mincemeat. 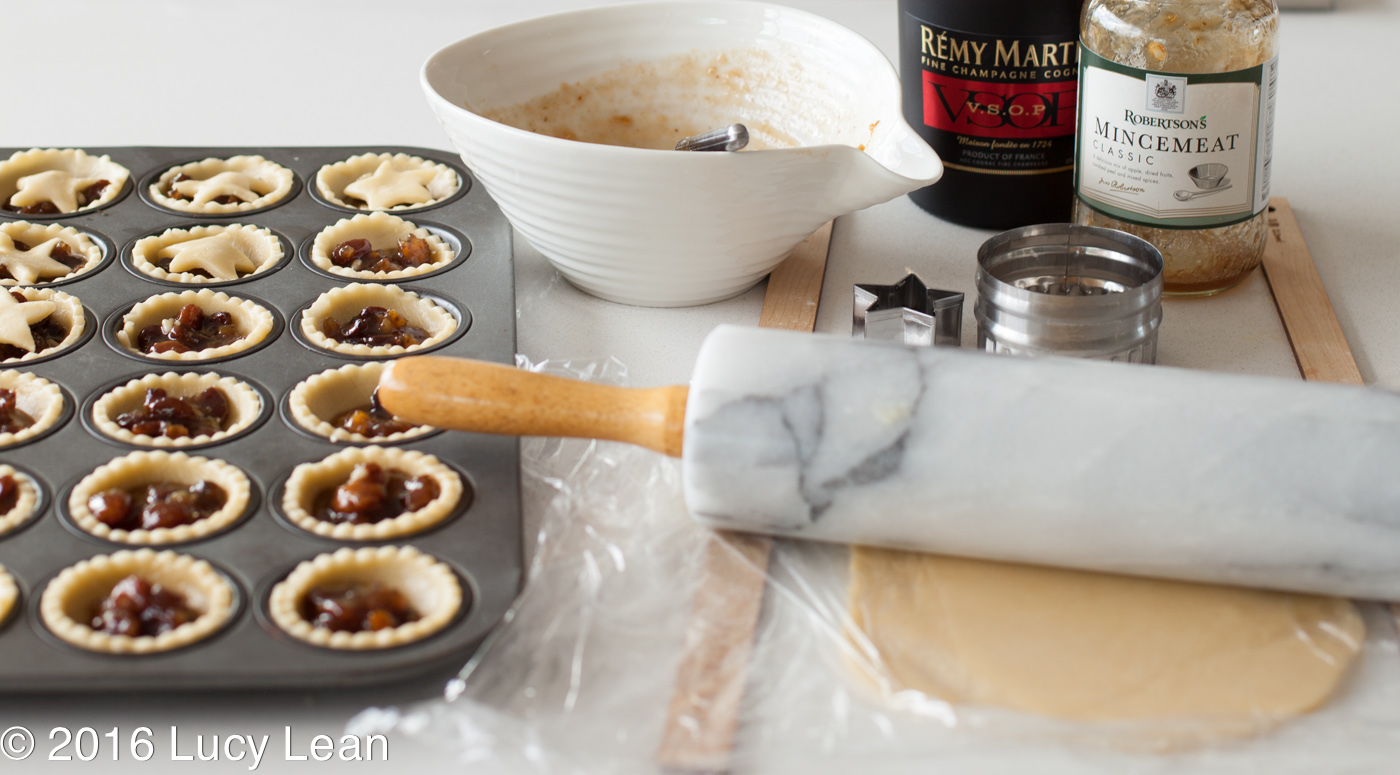 Making up a batch of mincepies takes time – they are quite labor intensive – and the freezer/refrigerator is the key to keeping the pastry perfect – I freeze the pie pan before I start and then return the pies to the freezer as I’m rolling out the dough, cutting the circles and stars and forming the pies. 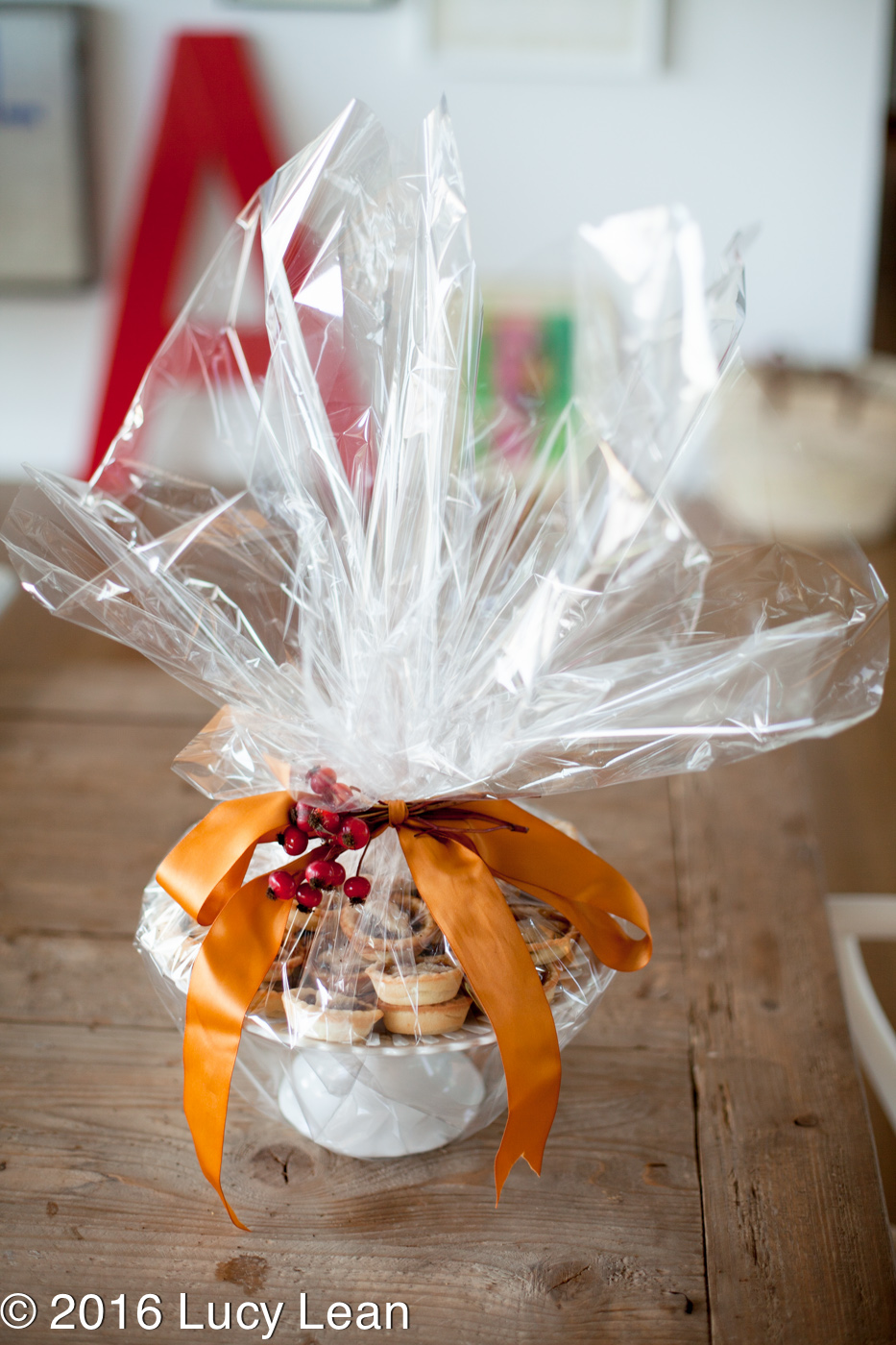 As you bite in to your first mince pie remember to make a wish! 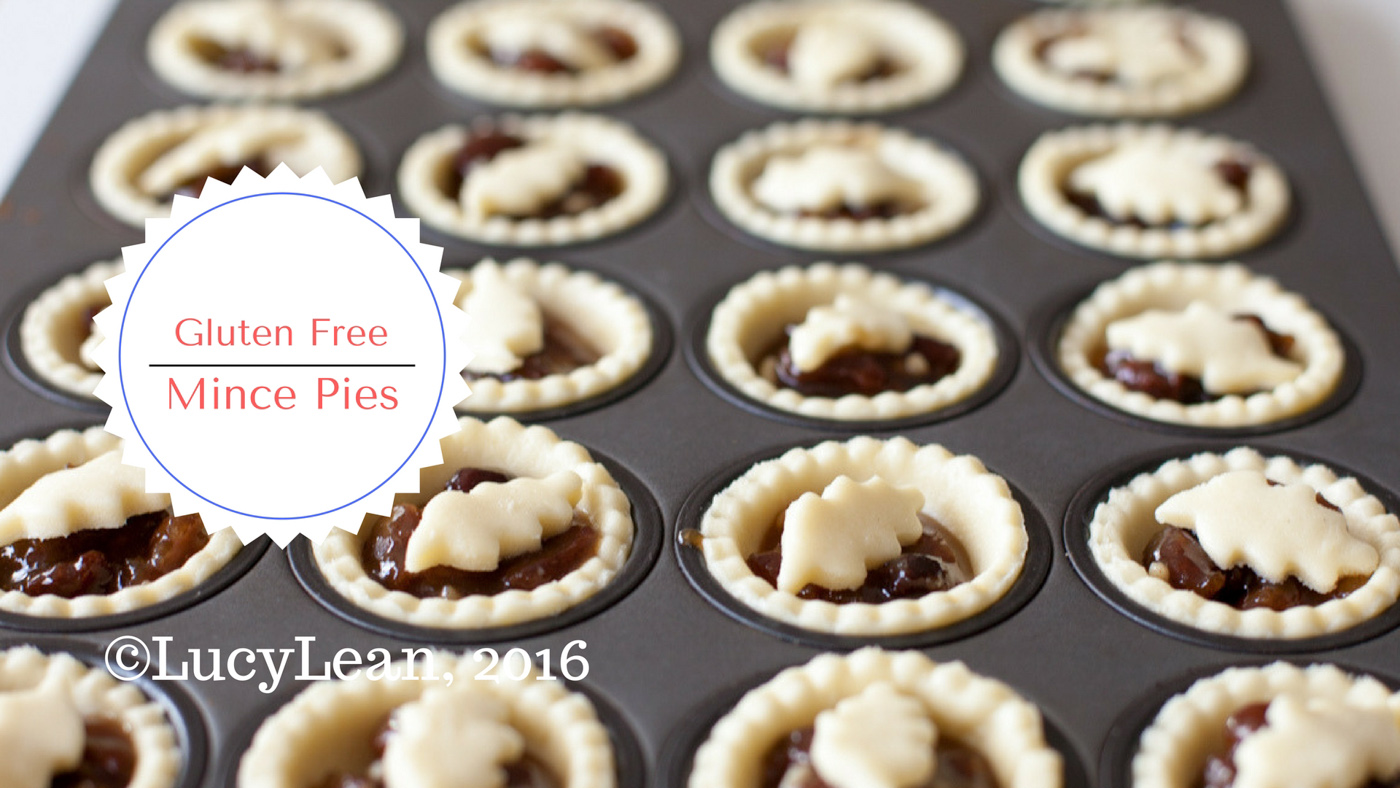 1. Cut the butter in to small cubes and place in freezer.
2. Place flour, sugar and salt in the food processor and blitz for a few seconds to combine.
3. Add the chilled butter and process until the mixture resembles fine breadcrumbs.
4. Slowly pour in the egg – adding just enough to form a soft dough.
5. Wrap the dough in plastic wrap and refrigerate for at least an hour. I keep a batch made up in the refrigerator over the holidays to make up a batch of mince pies at a moments notice – they are best fresh from the oven!
6. Preheat the oven to 350 F.
7. Place the pie pan in the freezer to cool off. Once the dough has rested roll it out between two pieces of plastic wrap to 1/8 inch thick using your Pastry Wands to get the perfect even thickness.
8. Cut out the circles of pastry and gently place in each pie space. Place a small amount mincemeat in each and top with a pastry star. I baked up GF and regular pies – I toped the GF pies with a little leaf and the regular pies with a star.  You can use an egg wash on the stars before putting them in the oven if you want shiny mince pies or leave them for a more matte finish.
9. Bake in the center of the oven for 7 – 10 minutes until the pastry is a nice golden brown on the bottom.
10. Cool on a wire rack and then transfer to a cake stand. Dust with confectioners’ sugar for a snow effect or if you are feeling in a gittery mood a light dusting of edible glitter for that extra sparkle.
11. Wrap up and tie with a big bow to take to friends.
12. When you eat the first mince pie  don’t forget to make a wish!