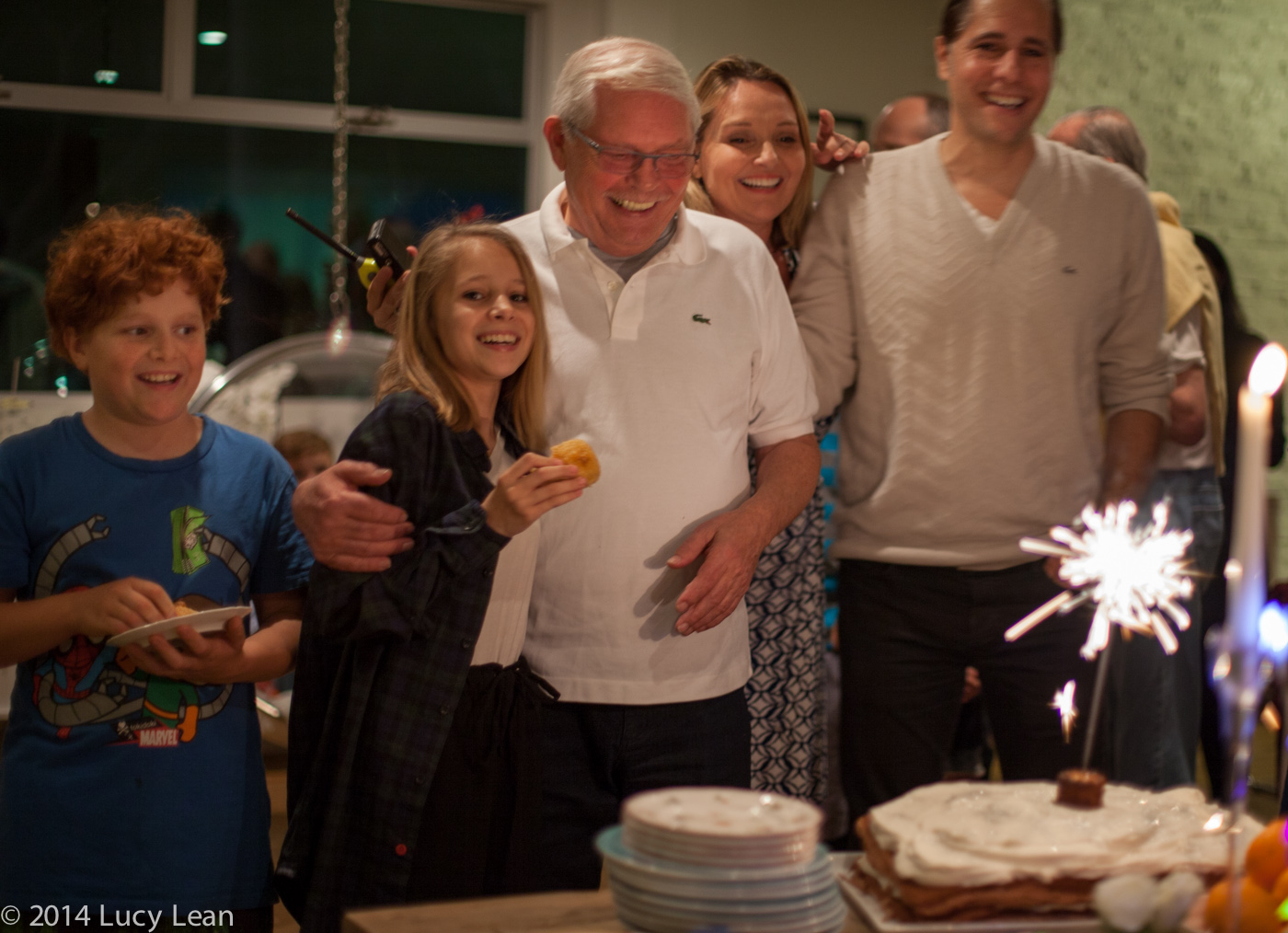 When you realize that someone special is entering his 80th year on this planet and has never had a birthday party because he has worked his entire life and the 23rd December is perhaps the busiest time in the restaurant business you throw him one! Papounet – more widely known as Jean-Jacques Rachou – famous for his restaurant La Côte Basque in New York – has been staying with us over the holidays – which happened to include his birthday.

Thank you to everyone who came and made him feel like the king for his birthday tea party – and special thanks to J Peter Robinson for leading us all in a fabulous rendition of Happy Birthday at the new baby grand piano.  Thank goodness I didn’t get the white one!!! 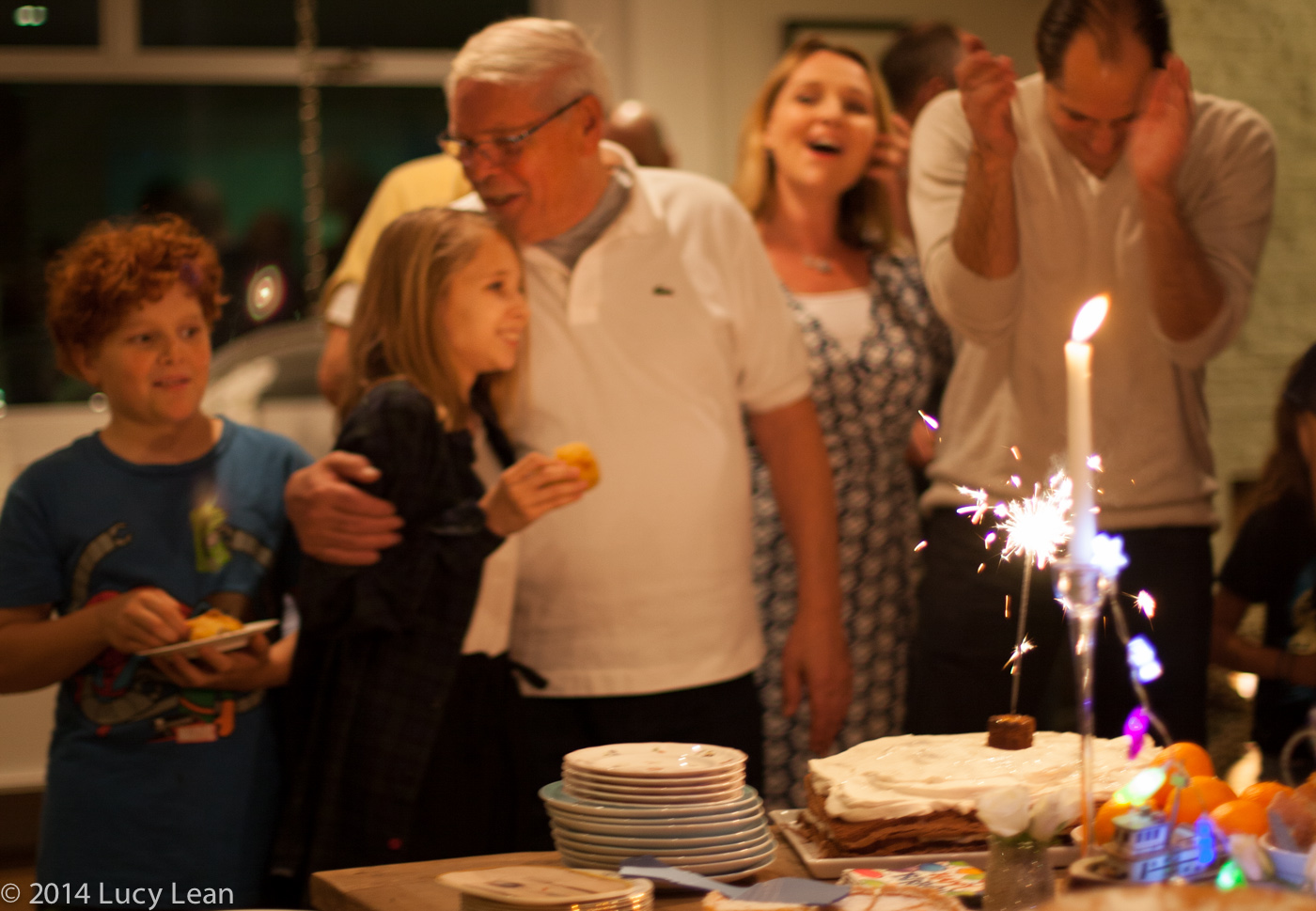 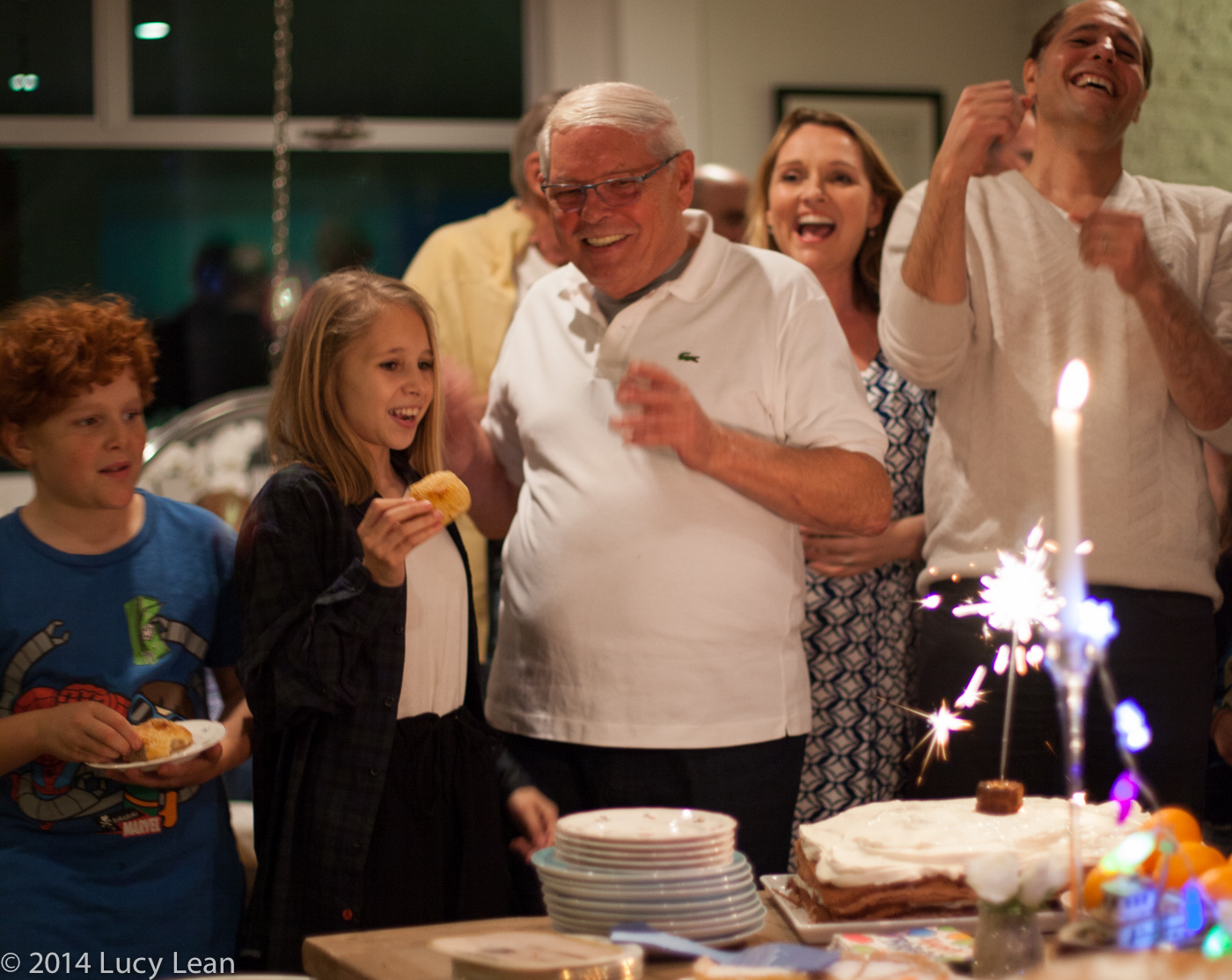 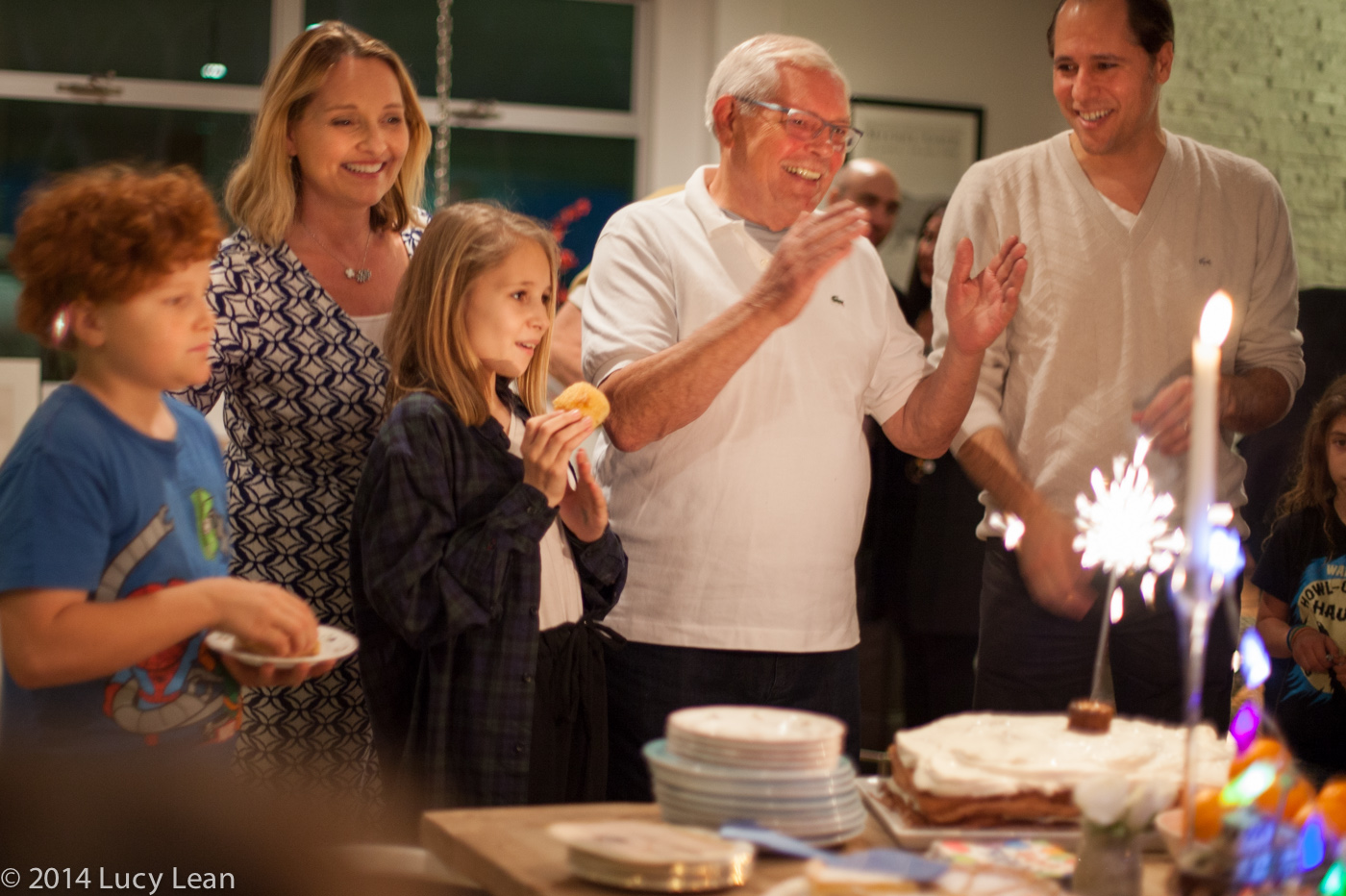 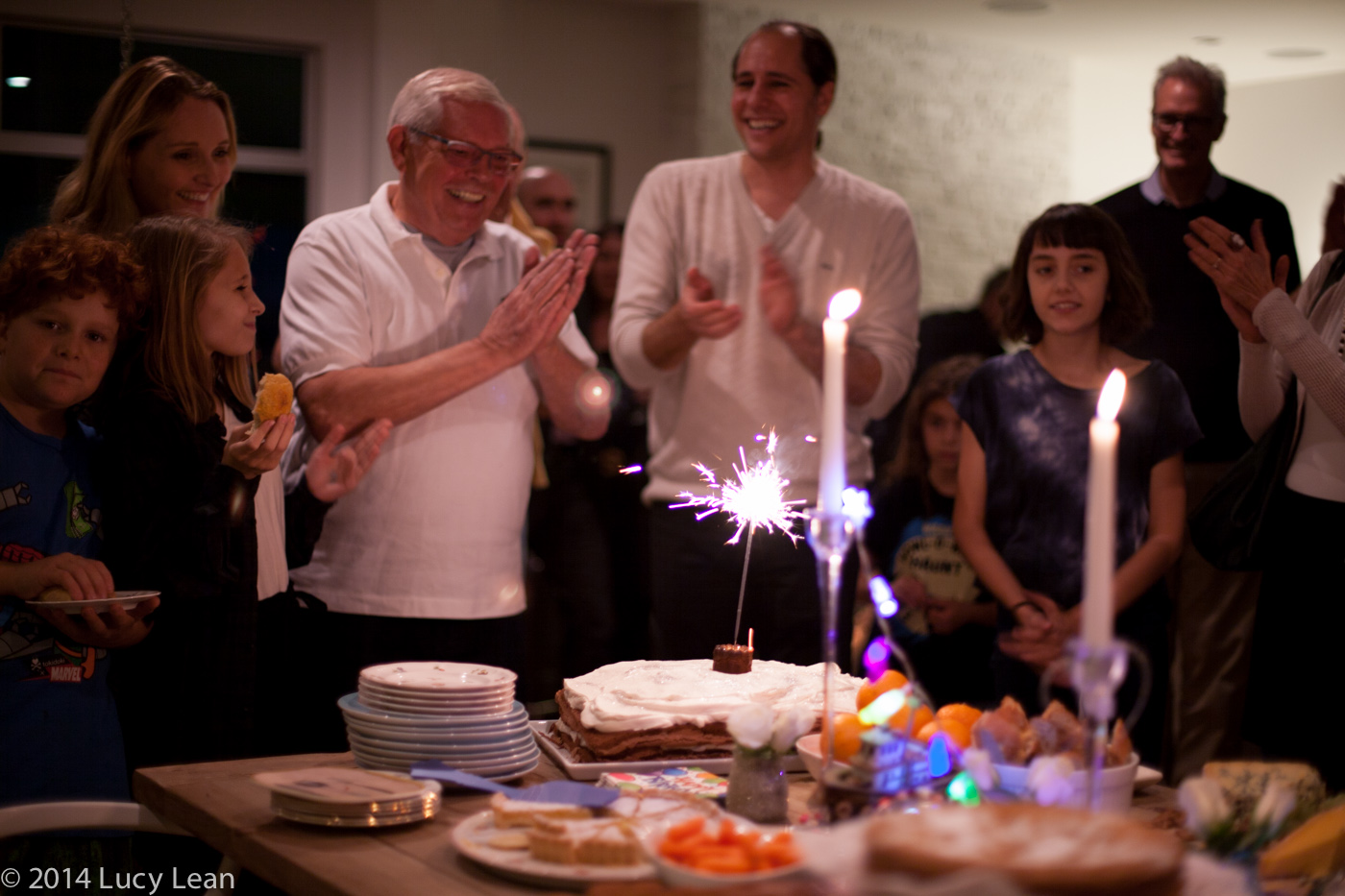 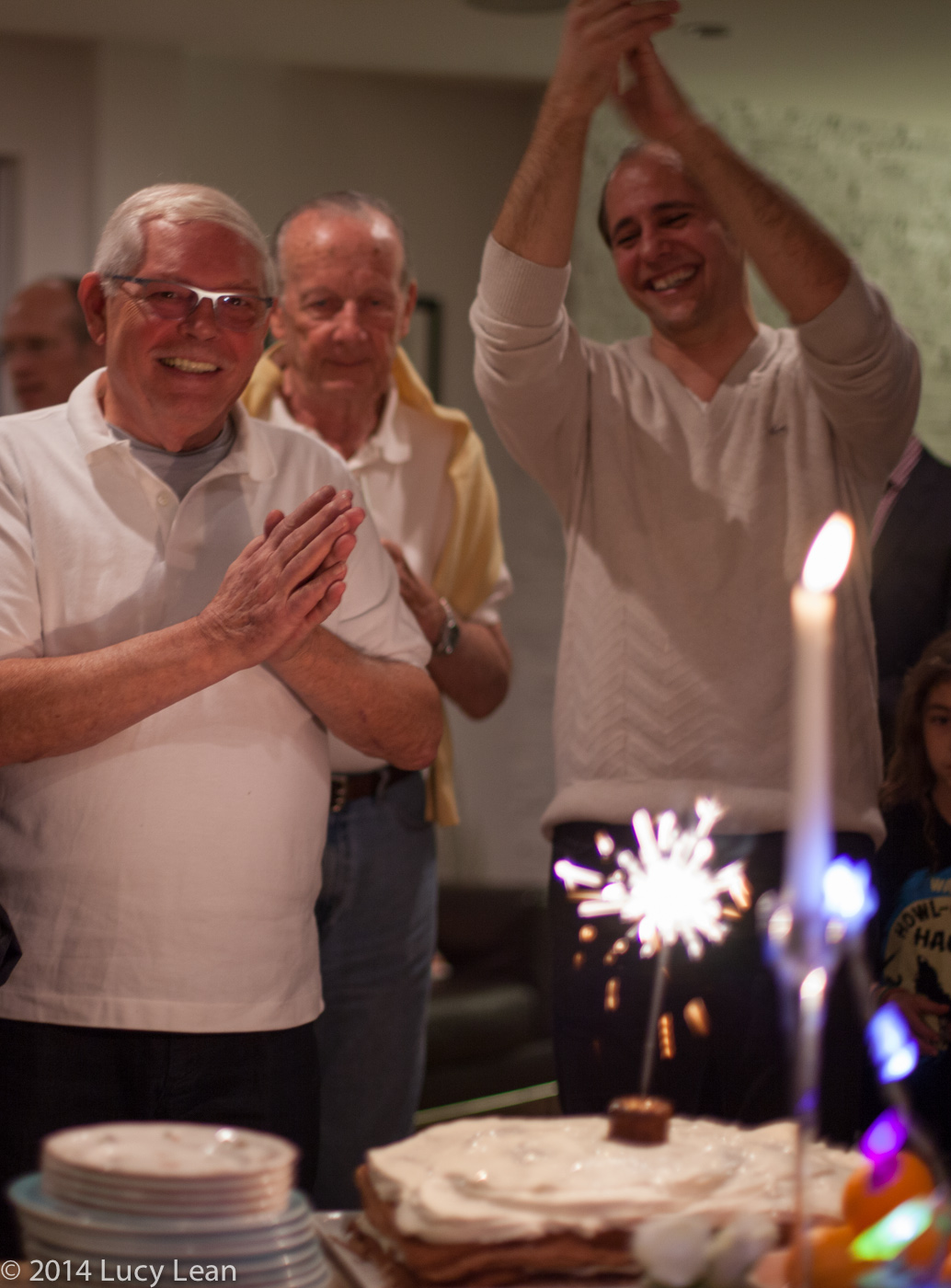 The hit of the evening – apart from the man himself – was his birthday cake. Friends who don’t eat cake tucked in to one, two and even three slices – but since it’s gluten free and light as a feather and it has fresh fruit in it it’s all good – really! 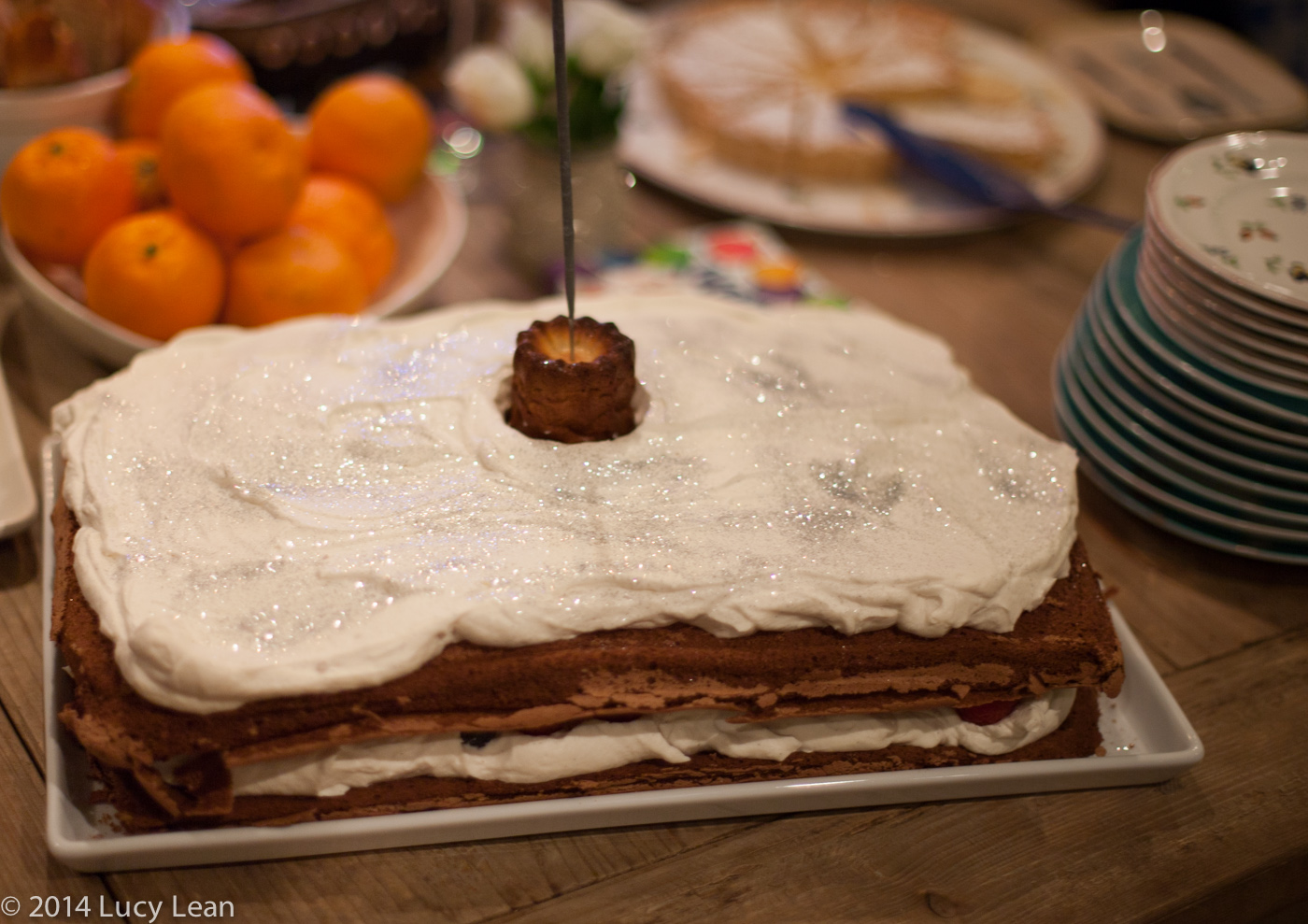 I think this cake is a little like a trifle sans jelly – it’s got fresh berries, cream laced with booze and soft moist light as a feather chocolate cake. It never fails to appeal and I cook it up again and again – not just for birthday parties – dinosaur cakes, monkey first birthday cake for the Little Lefebvres and even rolling it up for a Buche de Noel as it was originally designed to be made by Joan McNamara from Joan’s on Third who gave me the recipe that I’ve adapted over the years.  I like to make this as a dessert for dinner parties or any celebration as I did for our New Year’s Eve party (my friend Pam is Gluten Free and so all needs are met). It’s a hit!

Makes one slab cake – you need two; I made up the two cakes, one after the other, I find this is always much easier than doubling the recipe up and getting into trouble with overfilled bowls and worse still an overflowing electric stand mixer.

1. Preheat the over to 350 F. Line a large shallow baking pan with parchment paper, let paper hang over the ends and fold the paper along the edges of the pan to define the area.
2. Melt the chocolate – I use the microwave, you can use a bowl over a pan of boiling water, just make sure the bowl isn’t touching the water. Set aside to cool.
3. In the bowl of the KitchenAid with the whisk attachement, whisk the egg whites until you get soft peaks. Add half the sugar (1/2 cup) and beat until you get stiff silky peaks. Set aside.
4. In the bowl of the KitchenAid beat the egg yolks with remaining half cup of sugar until thick and pale, about 5 minutes.
5.  Add the cooled melted chocolate to the pale egg yolks and sugar and mix until incorporated, scraping down the sides.
6. Fold in one third of the beaten egg whites to lighten the chocolate mixture then fold in the remaining two thirds being extremely gentle until just fully incorporated and no white bits remain.
7. Spread cake batter onto the parchement paper in the baking pan. Bake in the middle of the oven for 15 – 20 minutes, until the cake has puffed up and the top is dry.
8. Transfer to a rack and cool completely. [I keep the paper on to help move cake]

Repeat this recipe to make a second cake layer.

1. Whisk one pint of the cream until it holds soft peaks, add half the confectioners sugar (1/4 cup), 2 teaspoons of vanilla bean paste and 2 tablespoons cognac and whisk until it holds stiff peaks. Be careful not to over whisk – you don’t want the cream to start turning into butter!
2. Place a platter over the top of one of the cooled cakes and using the wire rack flip and place cake on platter. Gently peel off the parchment paper.
3. Spread the whipped cream over the first cake.
4. Sprinkle the berries out over the cream and then carefully flip the second cake on top of the first using the wire rack to help. Gently peel off the parchment paper.
5. Whip the second pint of cream with the remaining confectioners sugar, vanilla bean paste and cognac. Spread this over the top of the cake. Decorate with edible glitter, a sparkler or candles.