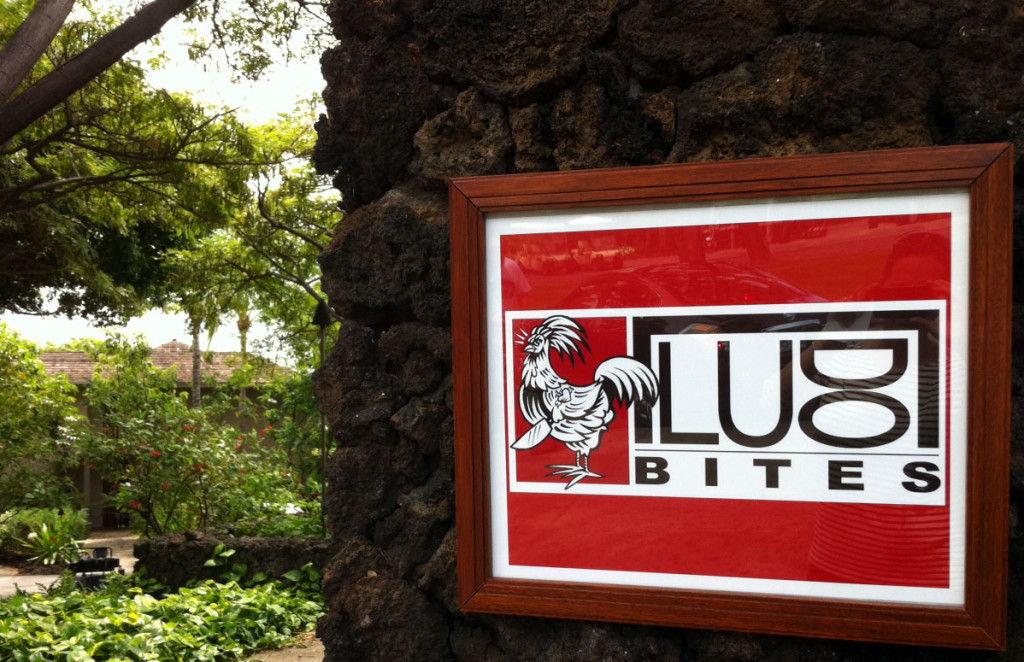 A rather special spin-off from the first Made in America celebration at the Four Season’s Resort Hualalai back in October was Ludo and Krissy Lefebvre agreeing to return and pop up at the resort for LudoBites Hawaii Nine-O. March 6th, 2012, LudoBites opened at the Hualalai Grille. And from what Ludo was saying to the Honolulu Magazine last week it could be his last.

I felt so honored and lucky to nab a reservation (on Urbanspoon). I was then doubly lucky to be seated at the chef’s table with a front row seat and best view of the master and his team (both new and old) in action. But perhaps best of all I got to go behind the scenes and sit in at the staff pre-dinner tasting and training session. 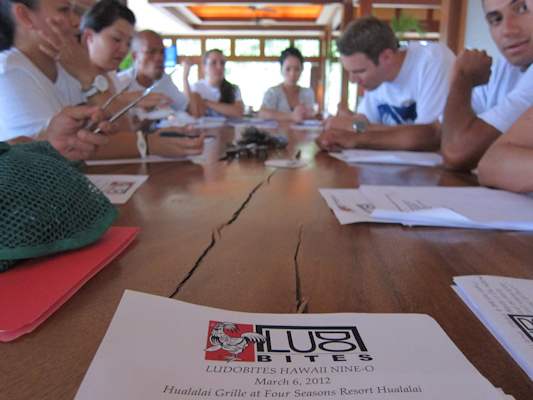 For Hawaii Quicksilver provided all the uniforms – pretty special t-shirts with a wave on the front and the LudoBites cock on the back, Hawaiian board shorts and denim or corderoy short shorts. Everyone seemed very happy with their outfits. 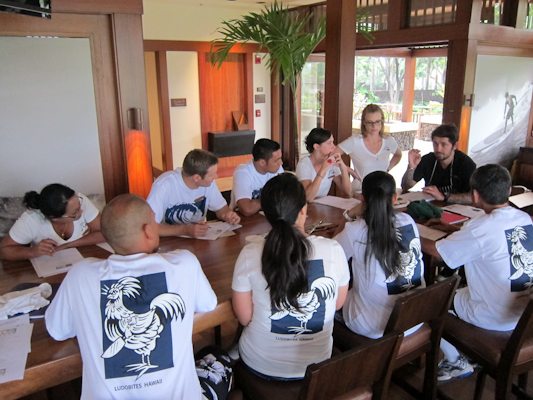 Lefebvre explained to the front of house team how his menu works: Small plates, sharing, no substitutions. Those who have been to LudoBites know the drill but to these Hawaiian’s of Hualalai it all felt a little new. “I don’t scream, I express myself!” said Lefebvre. “I have planned each dish very carefully using some of the best local ingredients.” He went on to say that the dishes are perfectly balanced and if guests start asking for changes it messes everything up. If there happens to be a food allergy then he acknowledged this is different; they simply shouldn’t order the dish. He was careful to point out to the staff that the fish sauce he uses in the Vietnamese salad vinaigrette can be dangerous for people with a shellfish allergy. 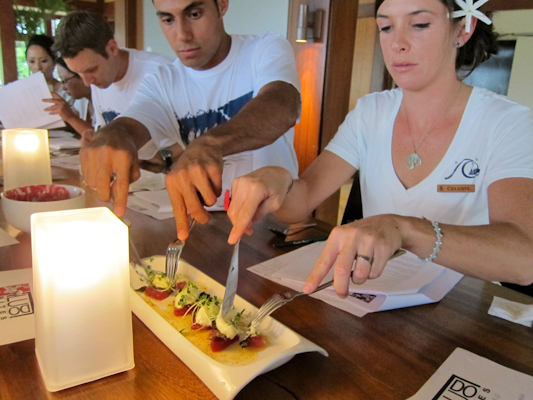 Celeste here cuts the ahi with sushi rice ice cream dish for everyone to taste. They all comment on the surprising use of the savory and the sweet in the dishes. “This is my favorite,” say Celeste as she tastes the fish. It becomes her mantra through the staff tasting – each one her favorite as she enjoys all the unexpected and unusual plates placed before her. When I catch up with her later in the evening I can see she is enjoying the experience of sharing the newness of the food with her regular guests who would normally be coming in for a club sandwich after a round of golf.
Half an hour before showtime – the Hualalai Grille is all set for opening night. On the large television screens a DVD of the LudoBites America Sundance played during dinner. I believe they chose the Denver episode for opening night – you know the one, where Ludo kills a buffalo and then eats the heart. For March 7th they toned it down and played the Santa Fe episode – if my memory serves me correctly I believe this is the one with the freak out with the chef stamping on the equipment. 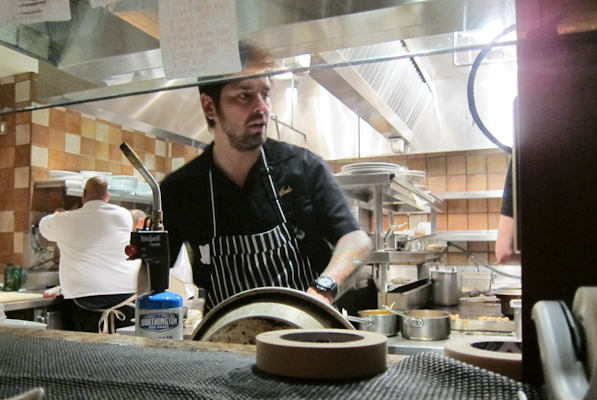 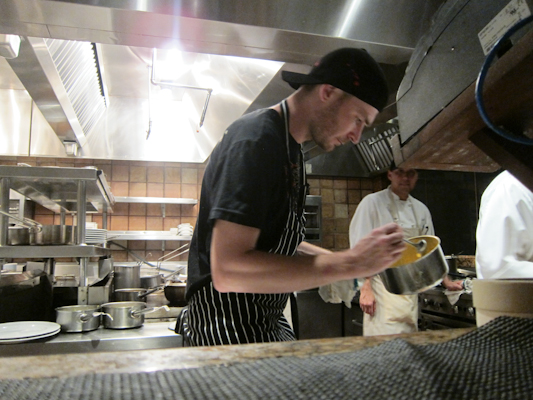 The steamed Hapu’upu’u (local seabass) was a tongue twister but if you pronounce it like a Hawaiian it becomes truncated and the many ‘u’s’ become one. The dish was one of my favorites of the night. The crispy caramelized skin complimented the buttery white fish with a hint of heat from the miso cream. It was served over fennel and navel oranges and Tonka beans ($32) and I believe there was a hint of anise from some Pernod in the foam. 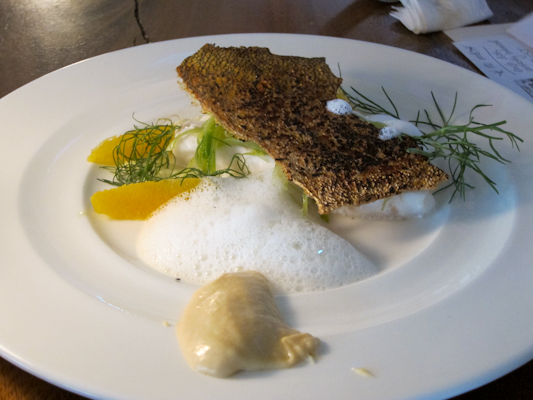 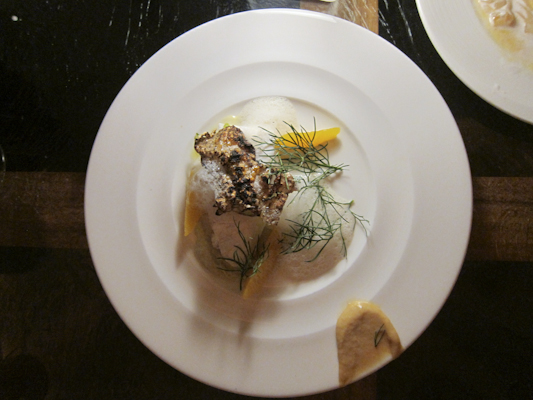 Lefevbre has made quite a name for himself in the wake of the upcoming foie gras ban in California this July – not least perhaps the dinner at Animal with Jon Shook and Vinny Dotolo. For the LudoBites menu he chose to do a Seared Fois Gras Pina Colada with Macadamia Nuts: 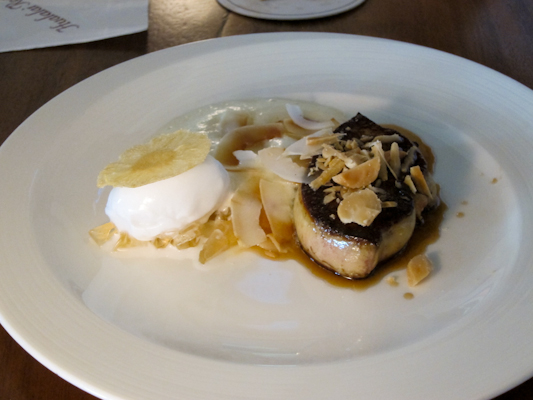 The last dish on the menu was the Hanger Steak Galbi Style with cabbage and kimchi butter. It was so good the dish was eaten before I remembered to get a shot! Oops! 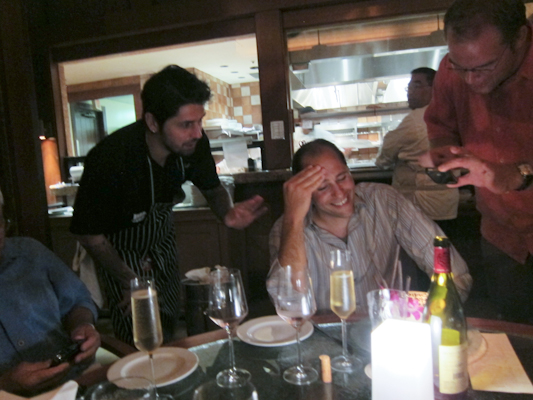 With Burgundy bottles empty and Champagne glasses drained we made our way back to our room at the Four Season’s Hualalai resort with full bellies and heavy hearts – the next day was our departure from paradise. 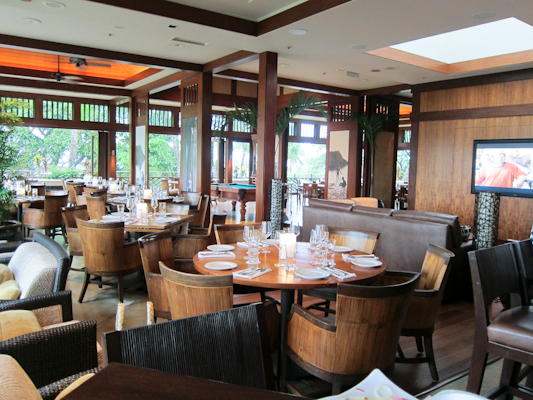 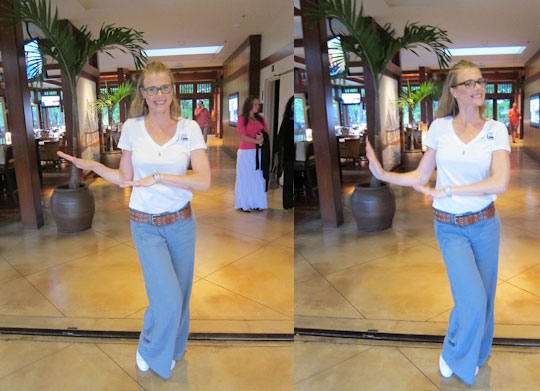 Doors open and despite the heavens opening simultaneously, Krissy – or Mrs Bites as one guest new to LudoBites called her – does a little hula dance to celebrate. 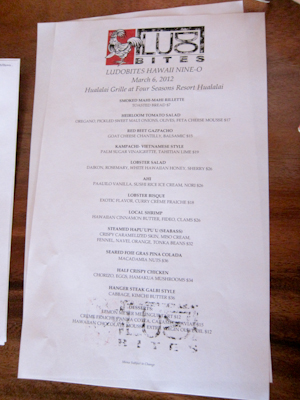 Some of the dishes on the menu may have appeared at previous LudoBites but at this incarnation they have been adapted by Lefebvre to include lots of island ingredients – fish, shrimp, vanilla, white honey, Puna goat cheese, macadamia nuts and pineapples. The LudoBites menu is forever changing and full of creative surprises. Despite Lefebvre spending a weekend in Los Angeles developing a spam recipe it didn’t appear on opening night. 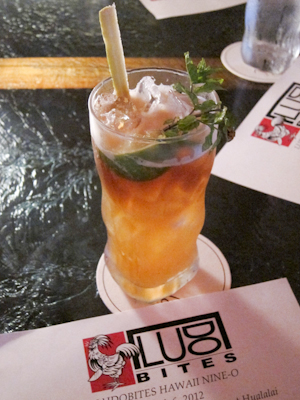 I started my dinner with one of the signature cocktails – a Mai Tai Tiki ($18) which consisted of Smith and Cross Jamaican Rum, Old Lahaina Dark Rum, Orange Curacao, John Taylor’s Velvet Falernum, fresh lime and pineapple juice and Angostura bitters. I have been enjoying Mai Tai for my very regular cocktail o’clock – this LudoBites version was less sweet (which I liked) and extremely strong (no complaints here!). It went straight to my head. We decided to ‘run the menu’ – a popular way to eat at LudoBites where you order every dish. I was very glad to bite into the first dish and let the toast soak up some of the alcohol: Smoked Mahi-Mahi Rillette on toasted bread ($7). 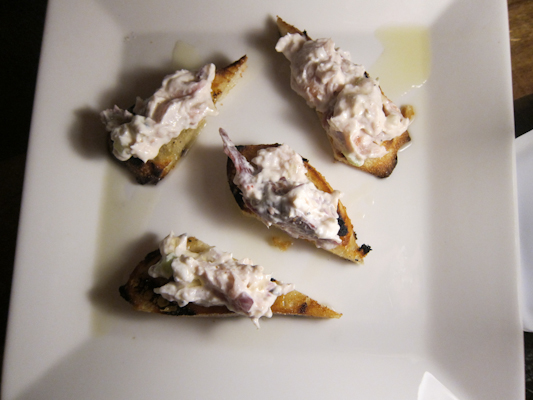 This dish was served along side the Heirloom Tomato Salad – Oregano, Pickled Sweet Maui Onions, Olives, Feta Cheese Mousse ($17). The acid of the fresh heirloom tomatoes, that exuded flavor, was nicely balanced by the sweet Maui onions and the rich creamy feta mousse. 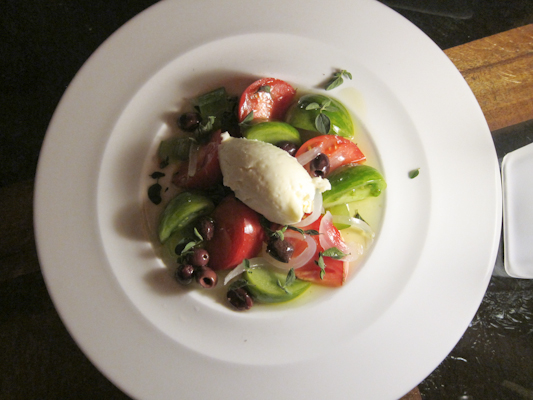 About an hour into service things were going well for Lefebvre in the kitchen. The large local crew were getting up to speed and there were even smiles as chef kept them all on their toes, plating to his high standards. 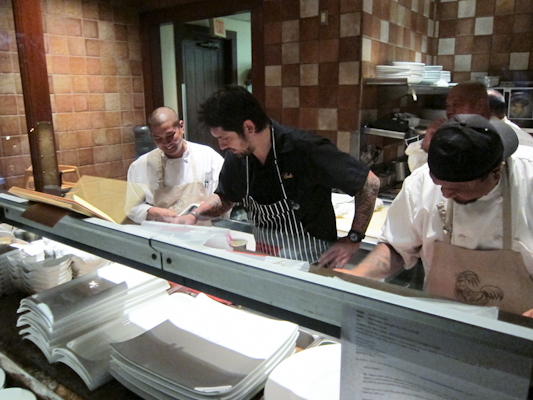 The Red Beet Gazpacho with the Goat Cheese Chantilly and Balsamic ($15) tasted as vibrant as the deep purple color. The orange nasturtium flower petals added color and a little peppery bite to the velvety rich soup. 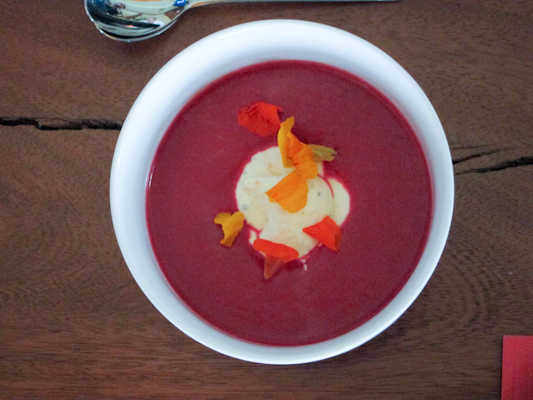 Next up, one of the favorites at the staff tasting: the Kapachi – Vietnamese Style – Palm Sugar Vinaigrette, Tahitian Lime ($19). At breakfast the next morning I tell Lefebvre that this was one of my top dishes of the night, “That was the dish I was thinking of changing for tonight,” he says. “Now I will keep it.” It was also at breakfast the previous week that I had introduced Lefebvre to the rare white Hawaiian honey and true to form it appeared in his menu in the Loster Salad with Daikon, Rosemary and Sherry ($26). 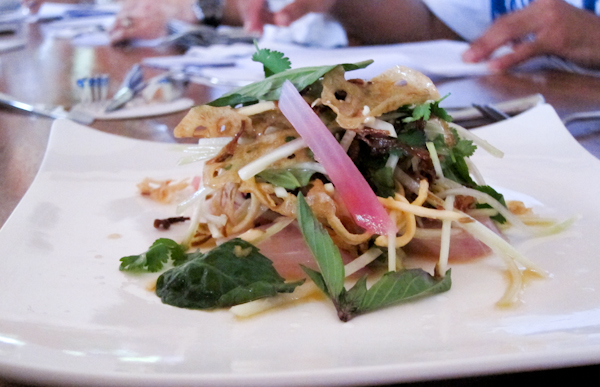 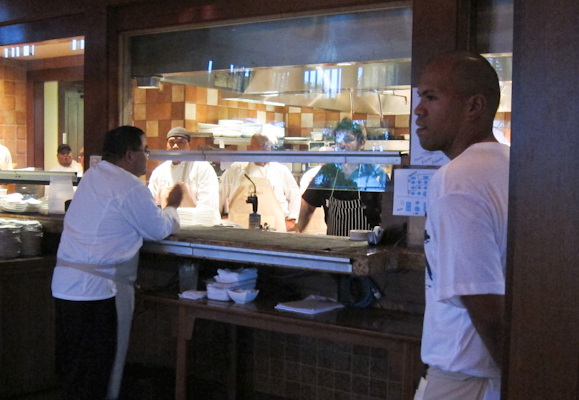 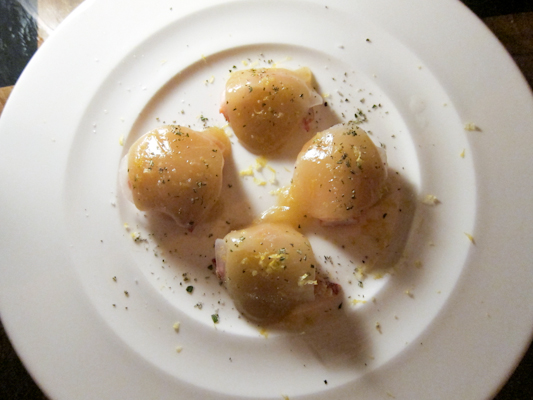 Minty and Rémy joined us for dinner – they actually look forward to LudoBites, after visiting what Rémy calls “The Chicken Restaurant” many times during previous incarnations in Los Angeles. When I mentioned to Rémy that in Hawaii there was a children’s menu both children thought this was hilarious. They rarely choose to eat off the kid’s menu when dining out. Minty will always decline to take the kids menu from the server and will ask for the regular menu. Strangely, on opening night those eating from the kid’s menu at the Hualalai Grille were all old enough to be grandparents – no kids apart from Rémy and Minty in sight. 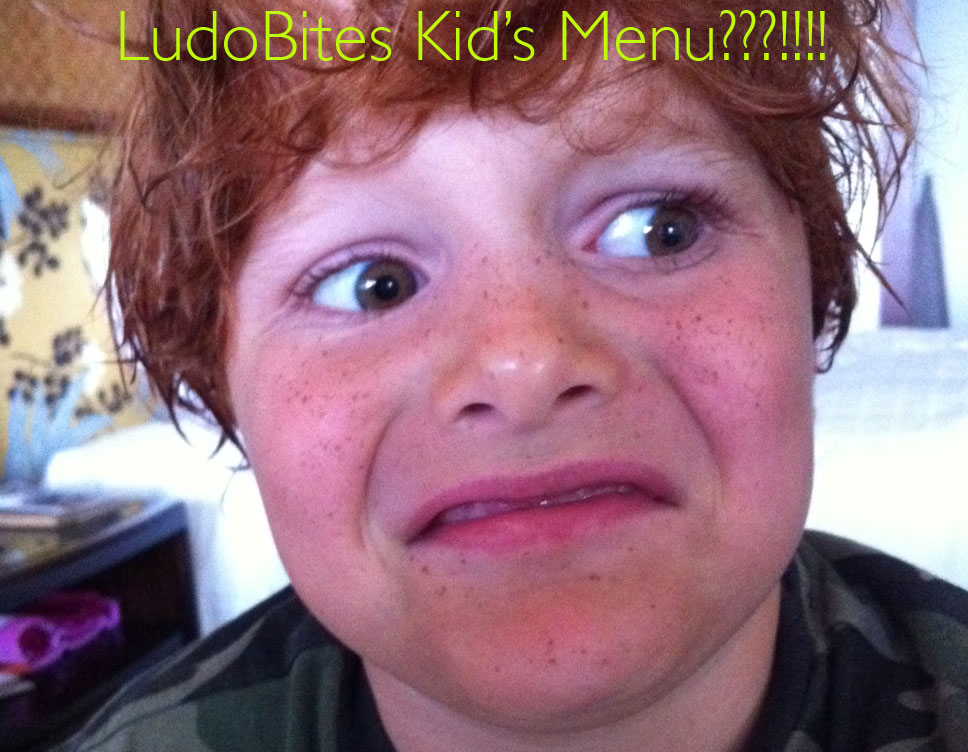 Having read the entire menu from top to bottom Minty ordered the Local Shrimp – with Hawaiian Cinnamon Butter, Fideo and Clams($26). Rémy couldn’t make up his mind but what he was certain about was he didn’t want the unofficial/official LudoBites kid’s menu. Since he was at the “Chicken Restaurant” he ordered the which came first chicken or egg dish – the Half Crispy Chicken with chorizo, eggs and Hamakua Mushrooms ($34). Usually the kids would eat the menu with us but since this was the last night of their trip to Hualalai I let them eat their one plate and return back to the room. 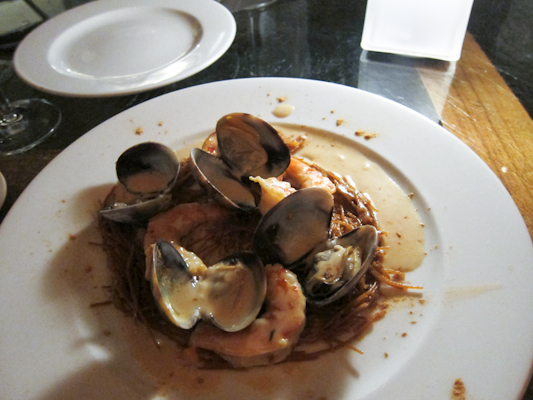 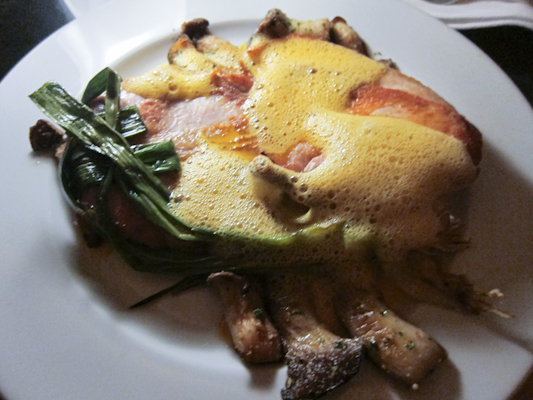 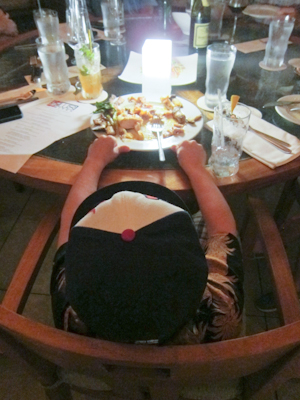 The next two dishes were the Ahi with Paauilo Vanilla, Sushi Rice Ice Cream and Nori ($26) and the Lobster Bisque with exotic flavor and curry creme fraiche ($18). The flavor of the bisque was complex but it was messy to eat and I didn’t enjoy the chunks of fruit, my least favorite dish of the night. 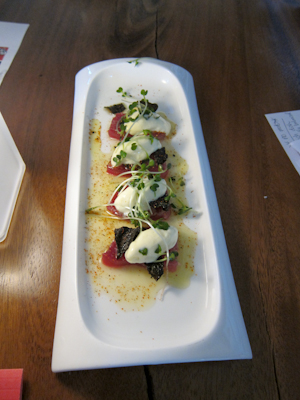 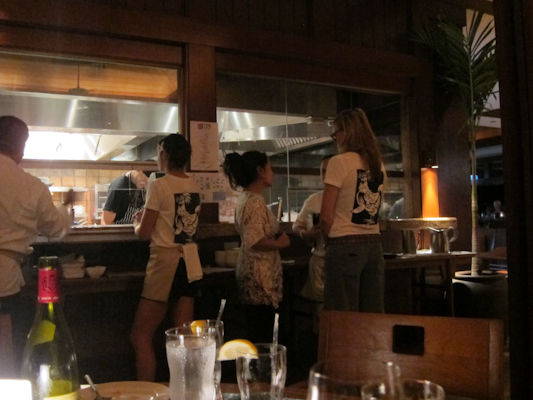 For this LudoBites as well as chef Ludo and his wife Krissy there were two returning crew members from LudoBites 8.0 – Greg and Rambo.  Rambo himself popped up unexpectedly and surprised the chef on the Big Island.

Chef surprised hubby with a birthday cake at the end of the meal – because he knows how much he enjoys a whole restaurant looking at him – almost as much as he enjoys anyone mentioning his birthday!  We ate chocolate cake for dessert so weren’t lucky enough to try the three desserts on the menu: Lemon Meringue Tart ($12), Creme Fraiche Panna Cotta, caramel and caviar ($15) and Hawaiian Chocolate Mousse with extra virgin olive oil ($12). The party wound down as the kitchen was serving its last plate. The opening had gone very smoothly with Lefebvre expressing himself on the plate rather than by raising his voice. The folks from Hualalai had for the most part kept to the menu and those looking for pizza had been persuaded to try to the kids menu. As we left the restaurant I over heard one regular telling his friends “It was great. [Pause] Different. But delicious.” 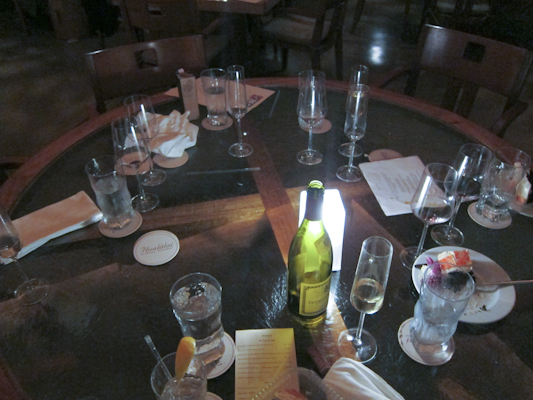 LudoBites Hawaii Nine-O continues until the 17th March – still time for those die hard LudoBites fans to grab a last minute flight to Kona for those all important walk-in reservations.

LudoBites 5.0 from Lucy Lean on Vimeo.