Chefs Move To Schools from Lucy Lean on Vimeo.

There he met First Lady Michelle Obama and joined her “Chefs Move to Schools” program. He returned to Cecconi’s West Hollywood, where he is the Chef, all fired up and looking for a local school where he could make a difference. During an interview with Evan Kleiman on KCRW’s Good Food he mentioned that he was looking for a local school. He didn’t have to wait long before he was contacted by Principal Bernadette Lucas of Melrose Elementary School Math/ Science/ Technology Magnet. Lucas was driving in her car listening to KCRW and heard Cavaliere.

“This is exactly what I had been hoping for the school. He was so sweet when I called him at Cecconi’s.”

The rest is history. Or rather the beginning of history. 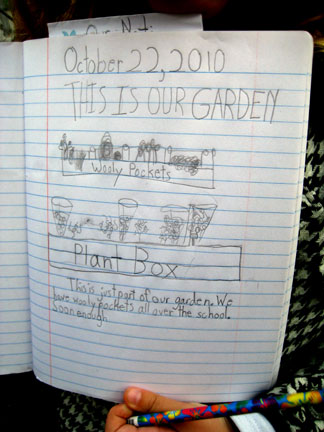 Chef Cavaliere, along with the school’s children, teachers and volunteer parents planted large-scale Woolly School Gardens filled with strawberries, rosemary, parsley, chives, pineapple-mint, basil, salad and other edible plants. The crops are housed in Woolly Pockets, the flexible, breathable and modular gardening containers made from recycled plastic bottles. At Melrose Elementary School the bright blue containers line the east chain link fence next to four large wooden raised beds containing freshly planted seeds, bright orange marigolds and even some tomato plants with fruit. After a few teething problems, not least being the 113 degree temperatures that killed off a large portion of the intial plantings, the vertical gardens and raised beds are now flourishing. A volunteer parent says they plan to install a drip system to help with the irrigation, as keeping them watered is an ongoing issue. 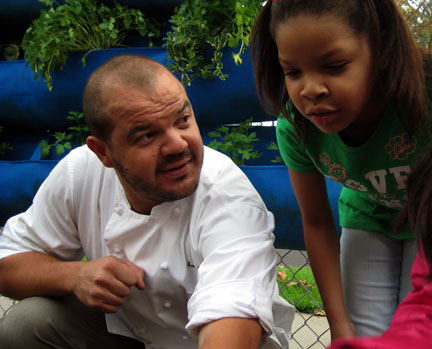 Cavaliere joins more than 700 chefs from around the country to launch the First Lady’s “Chefs Move to Schools” program, part of the “Let’s Move” initiative to fight childhood obesity. Recognizing the expertise of chefs and their tremendous power to influence how people eat, “Chefs Move to Schools” empowers chefs to adopt public schools in their community. Cavaliere and chefs around the country are working with parents and staff to teach children about nutrition and to improve school lunch and breakfast programs. 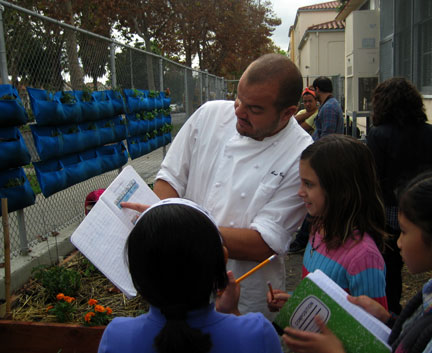 Chef Cavaliere reads from student’s science book about the garden

Cavaliere is passionate about helping these local children. He has agreed to spend time in the garden teaching the children about nutrition and cooking, has sponsored a salad bar at the school and wants to buy the herbs grown by the students and incorporate them in his menu at Cecconi’s. He encourages other chefs to do the same, including the other Soho House properties he’s affiliated with in London, New York, Miami and Berlin.

“The kids are having fun, learning and eating well,” says Cavaliere. “At the end of the day it’s all about them! They ask me the funniest questions. One kid asked me if you could make an air conditioning system using rosemary!” 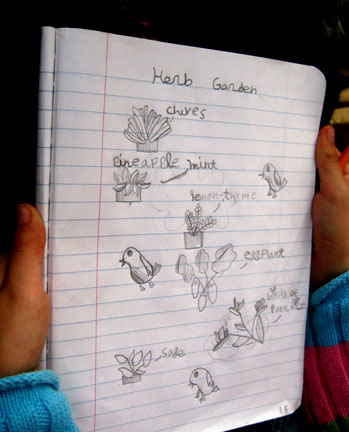 Herbs and Birds drawn by a third grade student

The kids were looking forward to a field trip to visit Cavaliere in his kitchen at Cecconi’s and there was already quite a bit of star chef adoration from the students.

“When I grow up I want to be a chef,” said Dominique in third grade as she asks Cavaliere for his autograph. He dutifully signs her Cecconi’s paper cup as he enquires what’s in it.

“Save it, eat it for break,” said Cavaliere.

The coffee and muffins for the press event were obviously much appreciated by the children – not sure this was the intention… let’s hope they were local, sustainable and organic – baked with a little pumpkin or apple perhaps?

« Halloween Pumpkin Cupcakes
Bacon and Eggs – Not Just For Breakfast »