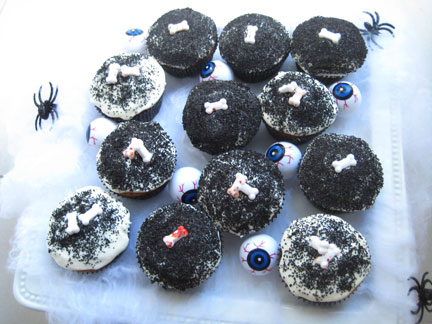 These cakes are delicious and the perfect treat to take along to a Halloween party. We made a batch and took them to our friends, Ilse and Meeno, at Sky Farm Red this past weekend. They hosted the Halloween party of this century, last century and next century – with guests from past, present and future along for the ride.

One hundred freshly carved Jack-o-lanterns lined the driveway, strings of orange fairy lights hung from the trees, a Chilean miner served toasted cheese sandwiches and we all warmed our toes around the flames of the magnificent new pink fire-pit that curved it’s way around the 100 year old Yucca trees. The lady of the house, dressed as Autumn in an orange embroidered flowing robe, had made it all with her fair hands, months of blood, sweat and tears, not to mention the tons of mud filled sacks. There is no limit to her creativity and ability. We sipped red wine and chatted with friends, old and new, as the full moon rose out of the dark grey clouds and cast a silver grey light to sparkling costumes. The conversation turned to tacky halloween costumes (of which there were none to be seen at this chic gathering of bohemian creatives) and a zombie princess said she had seen a sexy Chewie costume – she wasn’t fibbing.

The hightlight of the evening was the Haunted House – a disused Airstream decked out with dry ice machine, red lights, a witches head and a blood drinking zombie princess storyteller (the same one with sexy Chewie knowledge) – memorable to say the least. A tall skinny witch with a very green complexion commented that there hadn’t been anything like this when she was a child. Being La La Land most of the kids seemed to take it all in their stride as they summoned the spirits and listened to ghostly tales. Perhaps it was the parents who were awestruck or just nervous that the same ghoulish pageantry would be expected of them at home?

As the youngest revelers began to meltdown and older siblings gathered on red velvet cushions to watch It’s the Great Pumpkin, Charlie Brown Rémy and Minty stole a quick swing in the basement, both kids then exited down the metal slide and we all climbed the hill holding hands and telling each other we weren’t scared. We reached the car and wound our way back down the crunchy gravel track to reality and the traffic of the 110.

In the Kitchenaid with whisk attachment cream together brown sugar, granulated sugar and butter. Mix in eggs. Add dry ingredients, and whisk until smooth before adding in pumpkin puree.

Using an ice cream scoop divide batter evenly among liners, filling each about two thirds. Bake until tops are golden brown and spring back when touched. A skewer inserted in the center should come out clean, approx 15 – 20 minutes, rotating pans once if needed. Transfer to a wire rack; let cool completely. 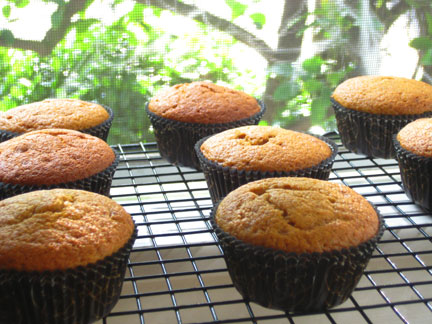 For the Buttercream Frosting

We used black sparkle sugar and then bones for decorations. For the cakestand we covered the cakestand with fake spidersweb and added a few spiders and eyeballs between the cakes. 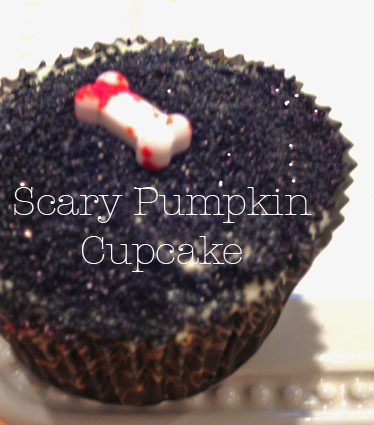