With two days to go until the official launch of her book Keys to the Kitchen, Aida Mollenkamp is hosting a fun virtual dinner party to celebrate. 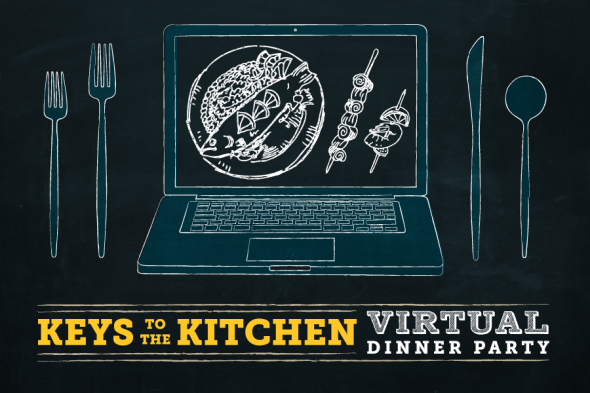 I will be bringing the Sticky Buns that I made for Krissy’s birthday in my previous post. Being invited to Aida’s exciting virtual dinner party  did get me thinking about the notion of hosting a dinner party, virtual or otherwise, and what it really means.

In Aida’s own words:

When I lived in Italy, one of my friends would always refer to dinner as the time where we would fare una pausa or take a break. That’s really what this book’s about because we eat three times a day so we might as well have a good time doing it — ideally with great people involved. So, this week, we’ve got some rather entertaining eaters, fellow food people, and bloggers, pulling up a chair for the Keys To The Kitchen Virtual Dinner Party, which will run from today through next Monday, October 29th.

First off what is a virtual dinner party? On the surface it’s a coming together of a few bloggers to share recipes to launch a cookbook or celebrate the coming of a baby for a baby shower. Let’s go a little deeper and take a closer look at some of the Pros and Cons of this type of online event. I had a great time organizing one when Made in America came out last year.  People are coming together for a common cause and supporting a friend and fellow member of the online food community. Another pro is you will hopefully help with the book sales. People will read your post and rush out to buy it – or more likely click through to Amazon. Hopefully you are inspiring people to actually cook from the book rather than just look at the pretty pictures. Best of all you don’t have to stress over that old chestnut – what should I wear?

What are the cons? My fear is the use of the word dinner party – we are told ‘pull up a chair’ ‘join in the fun’ and ‘everyone is invited.’ This isn’t a good dinner party – a good dinner party is when you carefully select a small group of friends that you hope will get along and be stimulated by each others fabulous wit. By inviting way more people than you would at a regular party, instantly the intimacy is lost as well as the exclusivity. But I always say there’s room at the table for one more.  And until someone works out how to send food over the net you are all dining on food porn. You will have your Sleeping Beauty mix up with invitations and forget to include certain guests that really should have been invited and who will then be hurt, left out and worse case scenario curse you to sleep for 100 years – virtually of course.

Here are the fabulous fairy godmothers of the food world that Aida invited to her virtual dinner party and I’m looking forward to reading all their posts and seeing how this party plays out:

Some of my favorite food people are participating so visit their sites as they post recipes, host Keys To The Kitchen giveaways, and help celebrate the officially official release!

The virtual dinner party is one wooden spoon away from the TV world of reality Dinner Parties – top of them all has to be Come Dine With Me from the UK’s Channel 4 – which is now in its 28th series with over 1000 episodes. The premise of the show, for those who have never seen it, is four strangers compete for the title of Ultimate Dinner Party Host and a £1000 prize by taking it in turns to throw a dinner party in their own personal style. This a travesty for the real dinner party – I mean what sort of manners would you have if you took out your score cards as coffee was served at a real dinner party? The drama comes for watching people cook up a menu that is unrealistic or overly complicated and makes for compelling TV. Over here in America the dinner party TV show is more about celebrity – fly on the wall stuff. The ultimate version of this was probably the Larry King Special: A Dinner with the Kings a group of friends (think top entertainers) of Larry King’s are mic’d and then we watch as they ate and chatted and laughed. There was the earlier hipper chat fest from IFC when Jon Favreau served up Dinner For Five which made for fascinating viewing (watch a few episodes on You Tube) – his guests always had something interesting to say, it made you feel like you had experienced a dinner party conversation with these stars. They occasionally lifted their soup spoons and ate and more memorably lit up – this was more a post dinner time celebrity smoke and booze schmooze.

The glorious dinner parties of years gone by where the men sat up straight in white tie and ladies dripping in jewels were served or served themselves from a silver platter offered by the first footman – yes I’m talking Downton Abbey fantasy again, have sadly long since gone! The closest I have come to experiencing this was in my teens in a big country house where the ladies withdrew to the drawing room, leaving the men to their port and cigars. At one, the poet Ted Hughes was one of the guests – thrilling then and oh to be able to go back now and experience it again now – a little older and having read more than just his children’s poem Iron Man. My lasting memory is him telling my father he had been to look at the farm I grew up on when it was for sale, just before we bought it, and how he had stolen a tea cup!

Are real dinner parties dead in this age of going out to eat at restaurants, grabbing a burger or ordering in a pizza? What’s lacking in these modern ways of dining is the all important coming together of people. There’s the thrill of new and old friendships and the inherent need at a dinner party to all get along. Given the more intimate setting of your home there’s also a little more room for the drinking of wine and the letting go – relaxing with friends. A good alternative, if you really can’t face cooking for a dinner party is to use a restaurant’s private room – the ultimate dinner party I experienced earlier this year was in the Jack Warner room at Mozza – no lack of intimacy (or vino for that matter) in this little room – great wine, food and the best of the best in terms of company and fun.

But is it really too stressful to pull together plates of edible food that your guests will ooh and ahh over? With Aida in your corner showing you how easy and effortless it is to whip up a feast when you master her Keys to the Kitchen or Nigel patting you on the back ‘virtually’ from the pages of his Kitchen Diaries I or II or Ottolenghi giving you a new exciting dish to impress even your pickiest vegetarian guest, how could it possibly go wrong?  I always feel the best way to pull off hosting a successful dinner party is to go with what you know, don’t get too fancy and hopefully cook food that needs very little tending in the final stages before it gets to the table. For me a really flavorful shepherd’s pie followed by a lemon tart or some tried and tested panna cotta may verge on nursery food but it makes for a very stress free menu on the host’s part and satisfied tummies on the part of the guests.

Maybe the best dinner parties aren’t the fancy ones of years gone by but rather the more casual Sunday suppers approach – a few close friends, a roast chicken or a one pot dish pulled from the oven and lots of bottles of wine. No pressure, just some fun company and an excuse to catch up, eat well, drink more and most importantly laugh. It’s been a while since I organized a Mother Forkers’ Dinner Party – my cooking group – we each bring a dish from that months chosen book. Not only does this mean we share the load of the cooking we also explore cookbooks we may not ever get too. The dinners are about the food and our individual journeys getting the dishes to the table using a new book. But first and foremost they really should be about the company. This is an excuse to talk, learn something new, relax and be happy. It really wouldn’t work if a member of the group starts getting picky or competitive about someones competence with the whisk. A real friend is there for you when your souffle collapses and this really is best enjoyed in real time, face to face, glass in hand, laughing at the good, the bad and the ugly. So thanks to Aida and her Keys to the Kitchen virtual dinner party I’m off to draw up a guest list for my next Mother Forker’s dinner party – and I advise you to do the same.