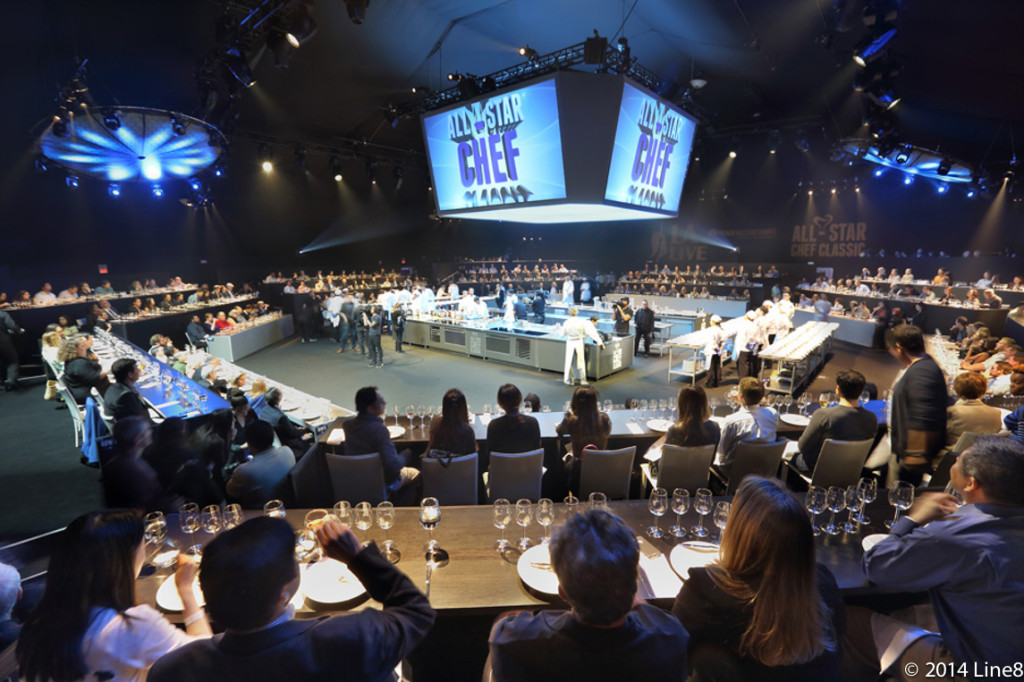 Oh what a circus oh what a show! Thank you to all the All-Star Chefs – they came, they cooked and they conquered our hearts through our bellies with their delicious food and their fun antics in Restaurant Stadium and the Chefs’ Tasting Arena. After months of planning by Krissy Lefebvre and myself, through our company Alice in Events, and in partnership with AEG, we held the inaugural All-Star Chef Classic.

All-Star Chef Classic was held on the Event Deck at L.A. LIVE, in a giant tent in the heart of Downtown Los Angeles. It will go down as one of the most thrilling 3 days of my life – a mixture of delicious food cooked by some of the best chefs from around the world in 3 days, 4 events.

The weekend kicked off with the French Masters Dinner in Restaurant Stadium – five French chefs (Alain Passard, Marc Meneau (and his son Pierre Meneau), Inaki Aizpitarte (not in the photo below), Ludo Lefebvre and Florian Bellanger) cooking up five delicious courses paired with amazing French wines. The evening was hosted by Restaurant Stadium’s maitre d’ Donato Poto – who provided a running commentary, interviews with the chefs and a little translation when needed. M. Passard and M. Meneau are Ludo’s mentors and this was not just an exciting celebration of French cuisine but almost a thank you from the younger generation to those that had inspired them – with a few chef drinking games thrown in for fun. Above the kitchen a giant jumbotron played vignettes of the All-Star chefs talking about each other in between live shots of the food being cooked and plated. 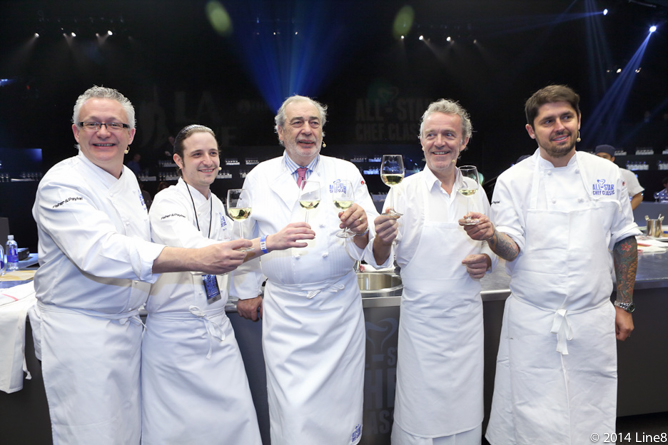 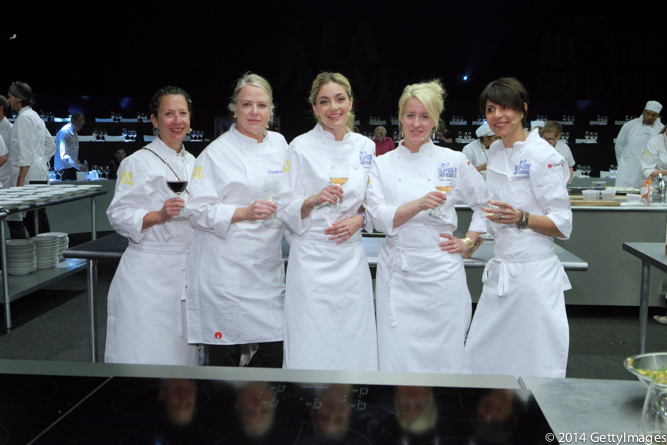 On Saturday night the Grill and Chill event was held in the Chefs’ Tasting Arena – with 10 chefs grilling and chilling – Michael Cimarusti, Roy Choi, Jon Shook, Donald Link, Gavin Caisson, Paul Qui, Gabrielle Hamilton, Ludo Lefebvre, Ricardo Zarate and Naomi Pomeroy. As guests waited for Michael’s Naked Cowgirl Oysters he chatted with them in the relaxed party atmosphere. Donald Link demo’d his pork sandwich in Restaurant Stadium and had Krissy Lefebvre alongside him to taste it. Later Josiah Citrin and Jen Jasinski demo’d how to cook four ingredients in very different ways.  All was going along very much as you’d expect until Nancy Silverton, Naomi Pomeroy and Dominique Crenn decided things were a tad boring and needed an injection of excitement – ingredients were hidden, fish was battered, sauce went flying and knives were drawn! Rumor has it Dominique Crenn is wanted by police and fled to Paris on Sunday – a story I can neither confirm nor deny. 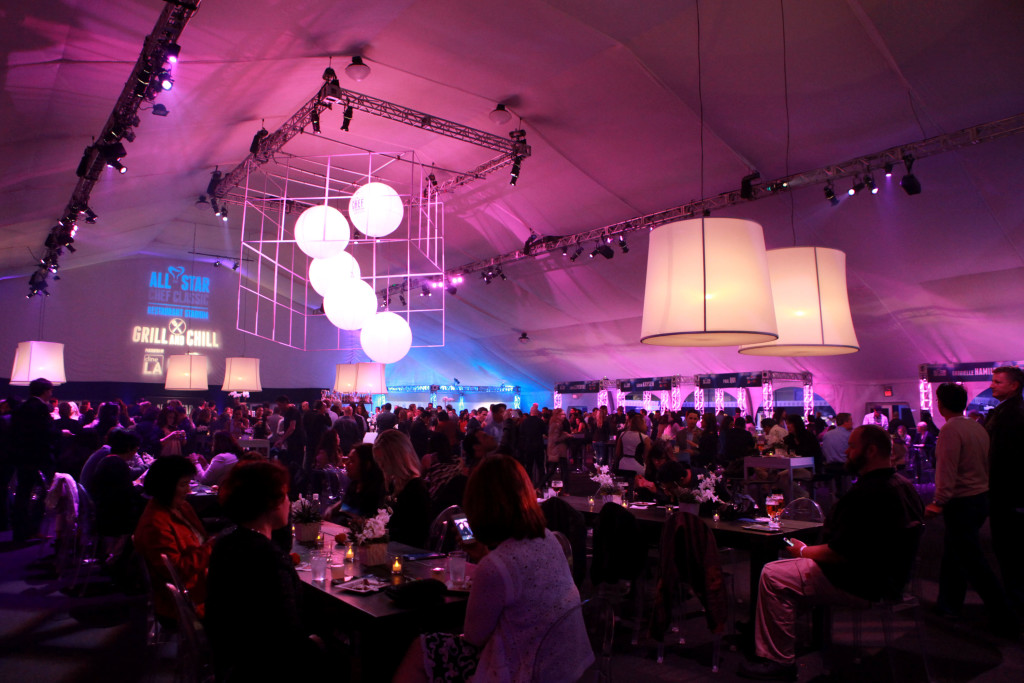 On Sunday we wrapped up All-Star Chef Classic with Savor the Season, a family friendly event where 11 chefs cooked fresh local seasonal ingredients for guests in the Chefs’ Tasting Arena – Graham Elliot, Josiah Citrin, Vinny Dotolo, Ben Ford, Nancy Silverton, Jennifer Jasinski, Alex Seidel, Wylie Dufresne, David Myers, David Lefevre and Waylynn Lucas. Restaurant Stadium was turned over to the children and Waylynn Lucas taught 60 kids how to make mini-donuts from scratch. From cracking the egg to stirring the batter to baking the filled pans and then glazing them this was very fun and extremely sticky. Florian Bellanger joined the fun to taste the children’s finished fonuts. At the end of the class the children got to pack up all the equipment in Sur La Table bags and take them home for more baking.  I barely got through the door on Sunday night – finally home – before Rémy was asking if we could bake fonuts! 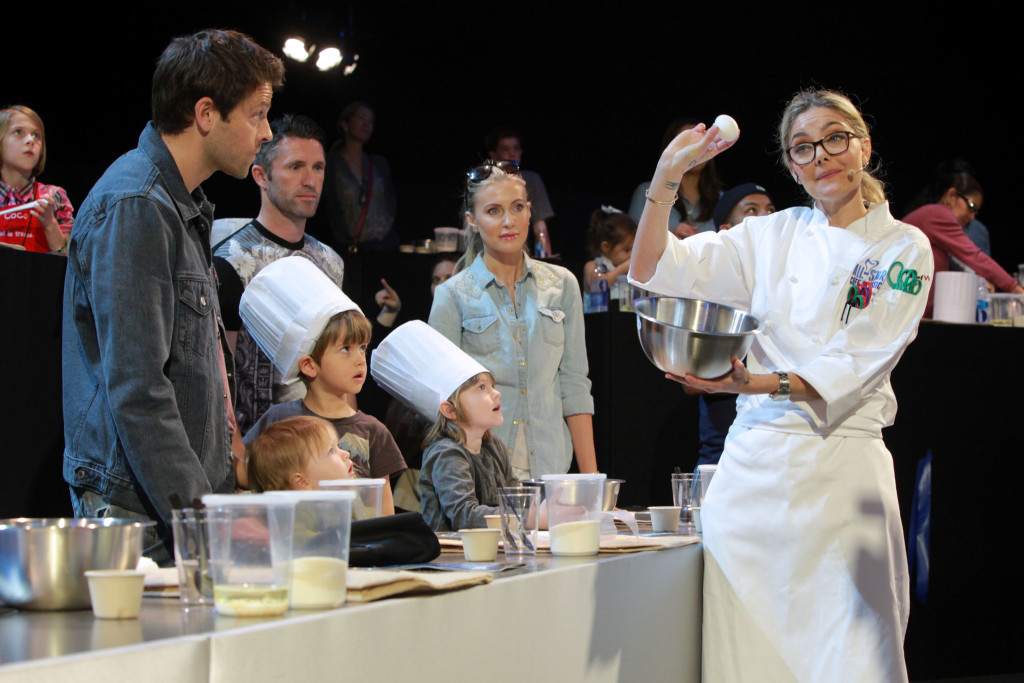 Time now to put my feet up and digest all that just happened – did it really happen? I feel that it passed me by in a blur and I lived an out of body experience – but as I like to say – forever forward – time to start learning from 2014 and start planning 2015.

THANK YOU EVERYONE WHO MADE THIS AN EVENT EXCEPTIONAL!

« Halloween Mummy Dogs
How to Make a Beaded Easter Egg »