Saturday night we had our much anticipated dinner at LudoBites 4.0. This was my second time dining at this incarnation of LudoBites and I had managed to round up the English to come with me because I know how much Ludo loves the English (It’s a French/English disagreement going back hundreds of years). 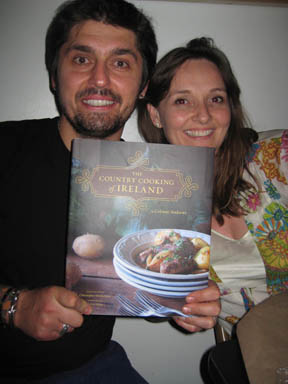 In light of Ludo’s elimination from Top Chef Masters the previous week when he cooked Irish Stew I decided to give him a copy of Colman Andrew’s The Country Cooking of Ireland.

This seemed to confuse him slightly.

‘Oh no! I love the English I just don’t like their food!’

‘Well I’ve brought you some meringues I made to prove that the English can cook!”

The next day I get the biggest complement from Ludo in a tweet from @ChefLudo ok @lucylean you have proved me WRONG the english can cook (well at least one thing). The meringue is incredible. merci beaucoup

It turns out the Colman Andrew’s book won the James Beard Award for Cookbook of the year – “time to learn some Irish cooking” as @FrenchChefWife put it in a later tweet.

I’m looking forward to Chef Ludo coming up to teach Minty and Rémy some knife skills – he offered when he saw a photo of Rémy chopping carrots on Facebook – “He’s going to cut off his fingers, I need to teach him!”

French knife skills, English manners and Irish rugby – my boy’s going to be set for life!