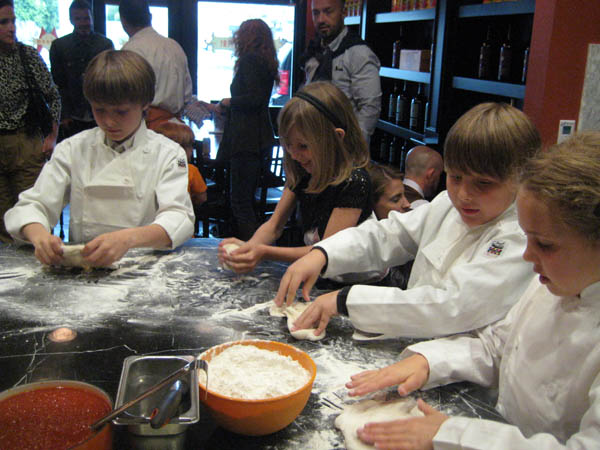 Sunday April 11th found Minty and Rémy cooking at Mozza alongside their new friends Miles and Ethan Bastianich and 15 other special guests at a pizza party in the new Scuola di Pizza. 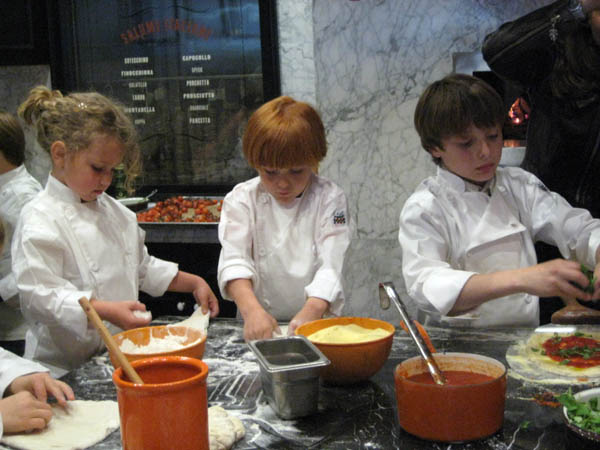 Rémy making his own Mozza Pizza

Before the kids got down to business they were suitably attired in either chefs jackets or white aprons.  A lot of flour was then spread around the counter and the fun began. 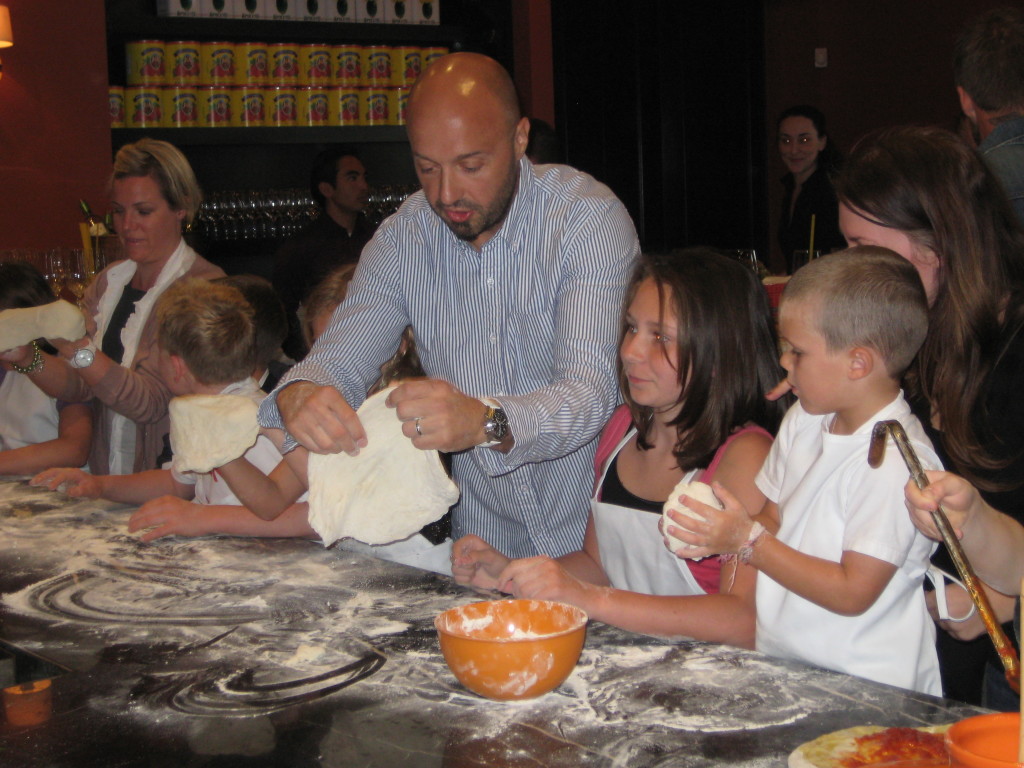 A small mound of dough was given to each child for them to flatten, knead and even spin into a pizza base. Then olive oil was brushed on followed by tomato, mozzerella cheese, salami, fennel pollan, meat balls, roasted cherry tomatoes – whatever the kids chose from a vast array of toppings. 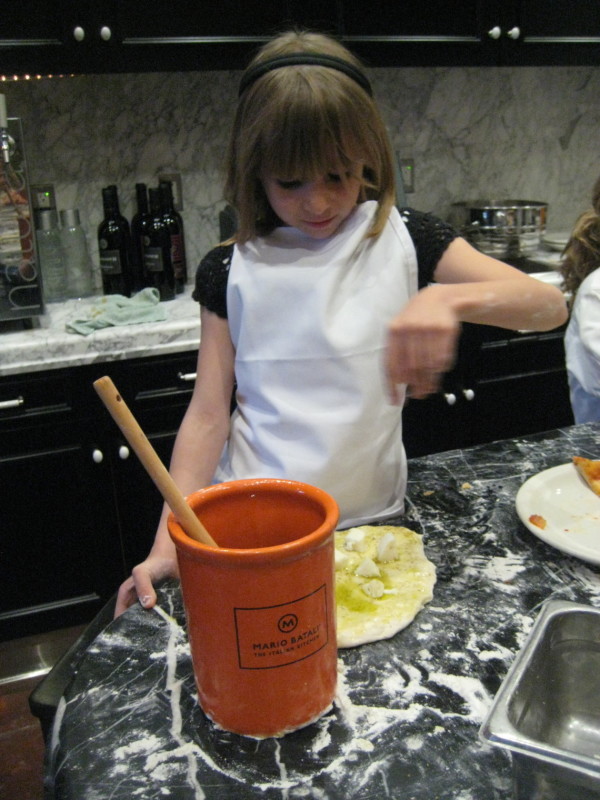 Once the pizza was created it was carefully transported to the oven on the pizza peel and cooked by the pros at Mozza. Rémy was extremely interested in looking in the oven at the pizzas cooking. 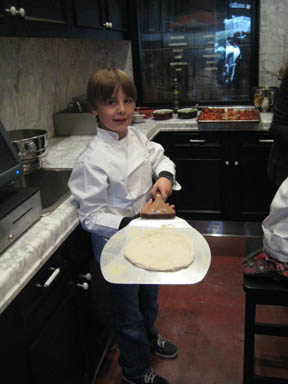 Ethan with his perfect pizza base

The pizzas were cooked, plated and cut into four – each child then handed out their pizza to waiting parents and guests. 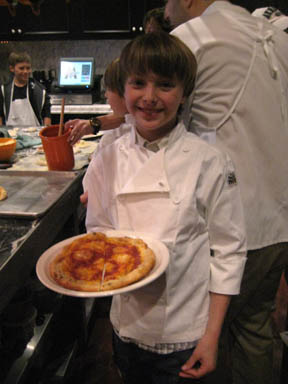 Gordon Ramsay bought his entire family and his mate David Beckham with Brooklyn and Cruz to join in the fun. 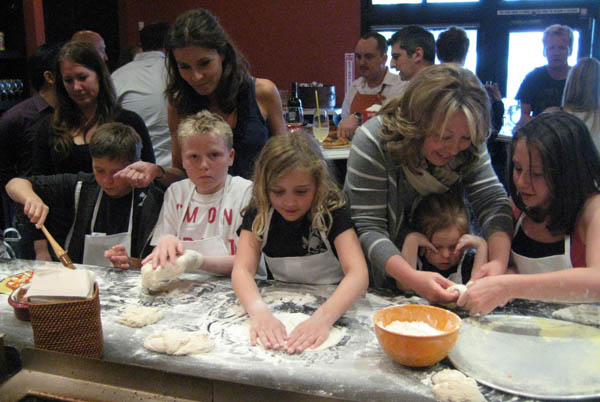 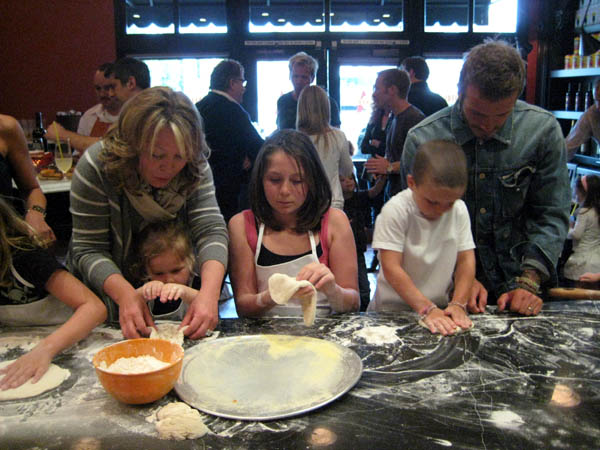 The kids were very good at picking out which pizza they had made when they came out of the oven. 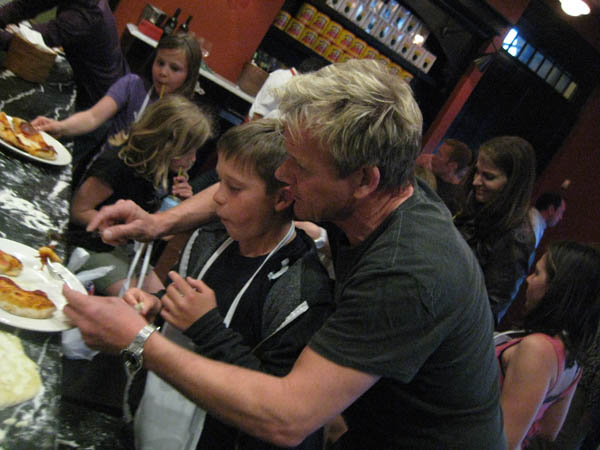 After cooking lots of pizzas the kids turned to dessert. 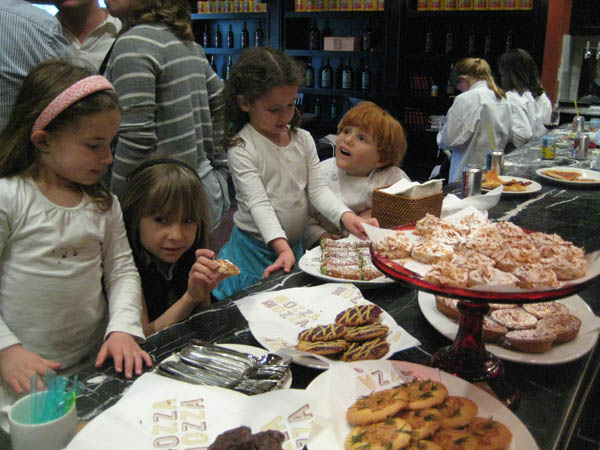 Twins, Ruby and Ginger feast on cookies and Budino with Minty and Rémy

The parents and other esteemed guests ate an Italian feast as the kids were kept busy with flour and dough. 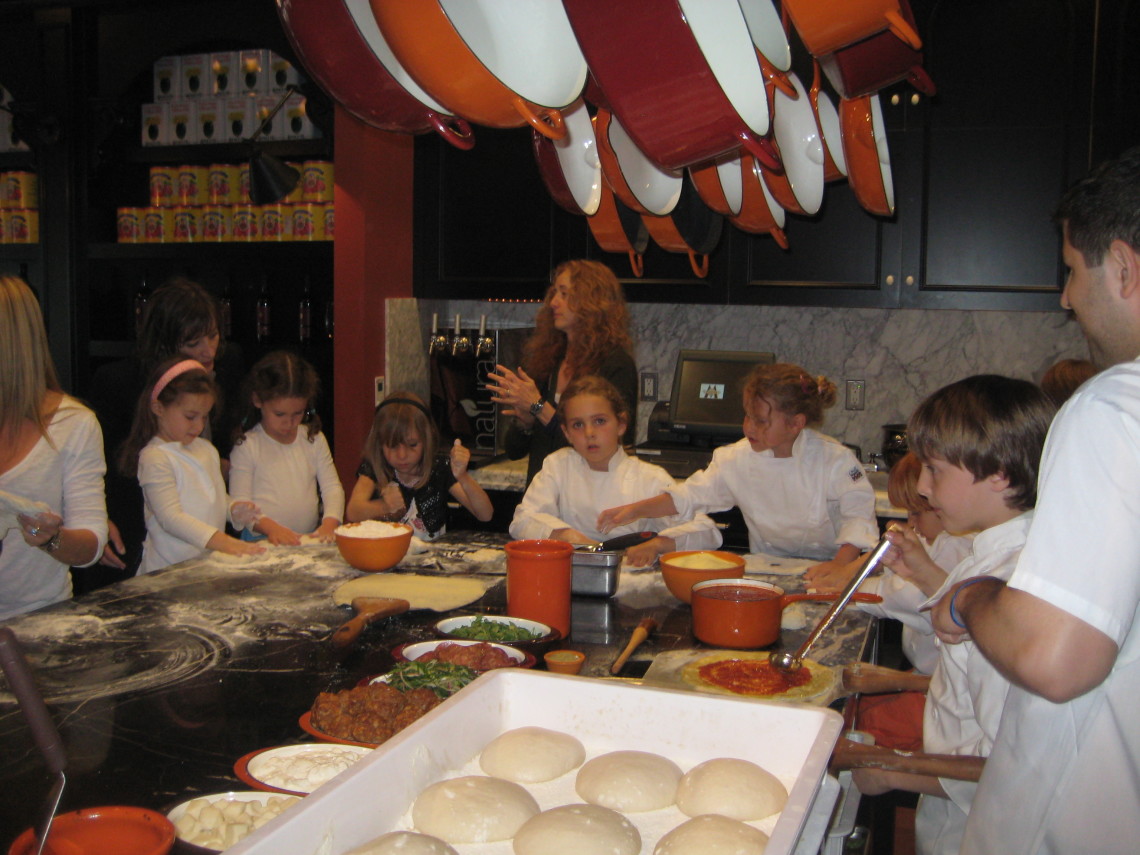 As the party wound down the littlest chefs attacked the biggest chef, Graham Elliot Bowles and demanded he played hide n seek with them. Meanwhile, Minty found her calling – working behind the counter serving customers with Miles at Mozza2Go. 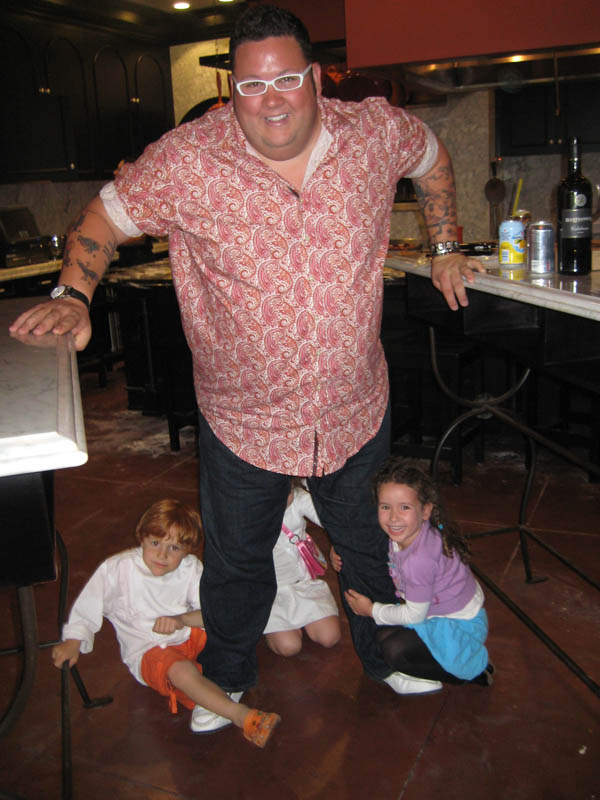 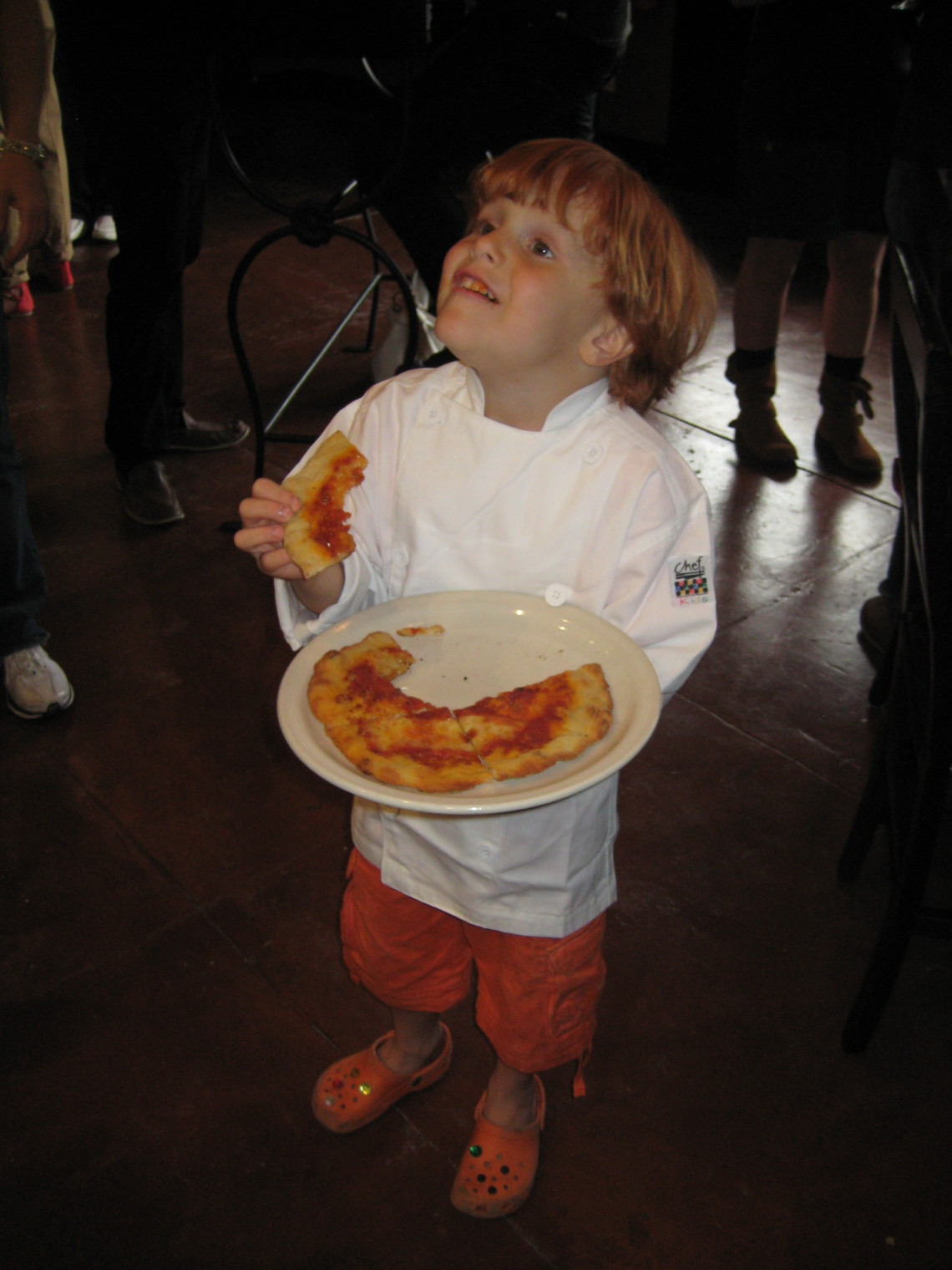 Finally, the kids took home a copy of Tony and the Pizza Champions, courtesy of Chronicle Books. Inside is a recipe for pizza dough that we will be trying at home – unless Rémy can get the recipe from Mozza… sadly he was more interested in getting James Beard finalist Chef Matt Molina to give him his orange hat. “I want your hat!”