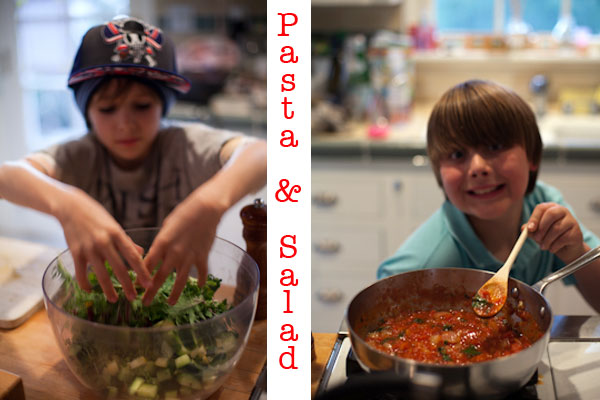 A couple of weeks ago we entertained Ethan Bastianich (youngest son of Joe Bastianich) – or rather this ten year old not only entertained us but fed us as, very well. Whilst Joe was on set with Gordon Ramsay and Graham Elliot shooting season 3 of Masterchef we rescued Ethan from the boredom of sitting in his father’s dressing room watching endless cartoons.

was released yesterday. This fascinating, funny and fast paced read is a must for anyone interested in restaurants – if you’ve ever dreamed of opening your own place one day this may make you think again – it will definitely give you lots of valuable advice and the all important Restaurant Math. I loved reading about Joe’s life growing up in Queens with immigrant parents – there are so many similarities with my own husband’s childhood, who almost ended up at Fordham Prep, although my Frenchman would never have worn white Capezio dance shooes – REALLY? And then I loved the behind the scenes look at what it’s really like running a restaurant – his book takes you in the back door with deliveries, into the walk-in, down to the cellar, on to the line and then through the swing doors and out into the dining room. This brought back so many memories of what I experienced behind the scenes at La Cote Basque when I first moved to America. You will look at any restaurant dining experience with new eyes.

Towards the end of this coming of age story Joe wonders what his kids will do and if, because they’ve had such a privileged upbringing, he has spoilt them. Having spent time with all his kids I’d say the apple doesn’t fall very far from the tree. The first time I met Ethan and Miles, a couple of years ago, they set up a camp in our backyard with Minty and Rémy – but it wasn’t any old camp – it was a restaurant and they served and dined on pasta! Obviously! I’ll never forget Miles balancing two dishes on each arm and somehow managing to climb the steep hill up to the table and chairs.

Given their culinary genes – Joe is Ethan’s father, however let’s not forget his grandmother is chef/restaurateur Lidia Bastianich of many great Italian restaurants including Felidia, Becco, Esca, Del Posto and Eataly and Minty’s grandfather is chef/restaurateur Jean-Jacques Rachou of the late grande dame La Cote Basque in New York – I was intrigued to see what these grand kids would come up with. This meeting of France and Italy, of two young cooks born less than a year apart, produced much laughter, friendship, goofiness and from genuine culinary skills a delicious, easy family meal. Nonna Bastianich and Papounet Rachou would have been really proud. 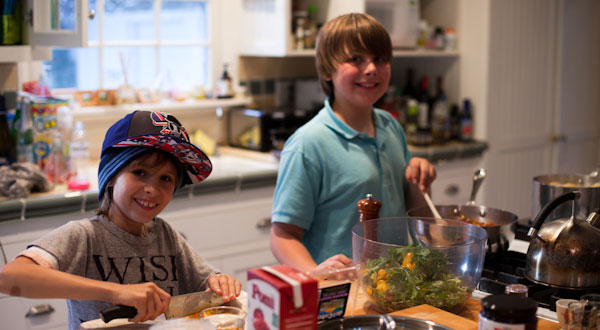 Here is a series of photos from their evening cooking supper – just the two of them, together in the kitchen having fun and putting together a full menu: salad, pasta with buffala mozzarella and tomatoes and a strawberry smoothie: 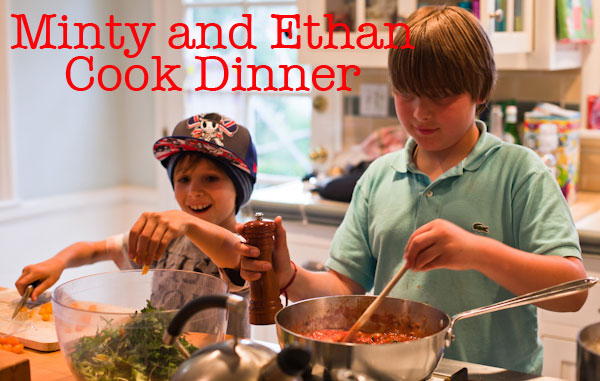 Minty took charge of making a green salad with baby arugula, baby kale, diced cucumber, diced green apple and yellow pepper. Ethan focused on making a tomato sauce, first he chopped an onion, cooked it in a generous amount of olive oil over a medium to high heat until it was translucent and then added the chopped tomatoes (Pomi). This was seasoned and left to reduce down into a rich flavorful tomato sauce. 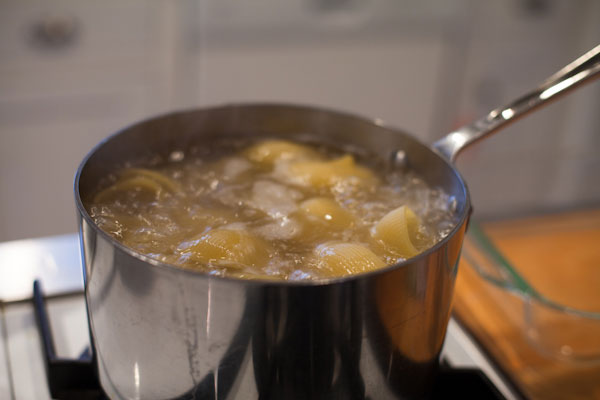 The giant pasta shells were cooked in salty water – Minty had picked them out at the supermarket with plans of stuffing them with shrimp, but we never got round to this and so Ethan and Minty eagerly chose to cook them up. 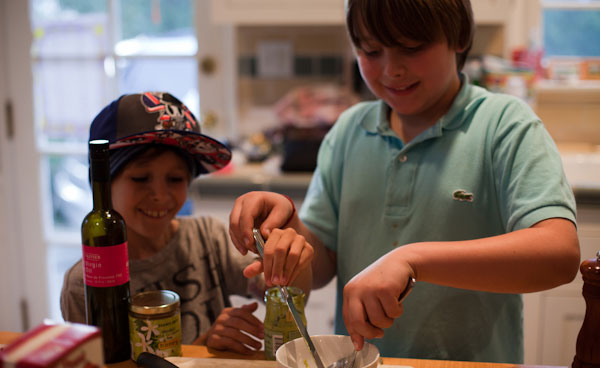 Whilst the tomato sauce was simmering away and the pasta shells were cooking they made a vinaigrette with olive oil from Provence, clover honey, tarragon Dijon mustard and Champagne vinegar. 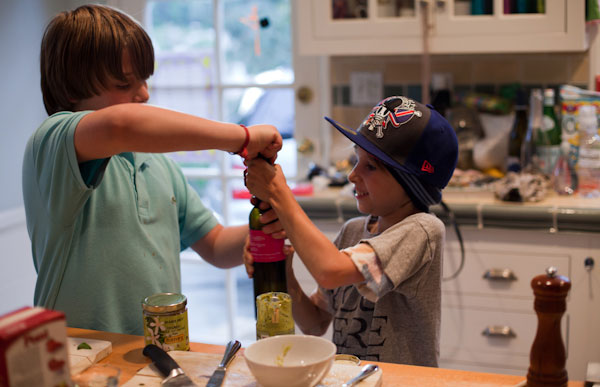 Teamwork to get the cork stopper out of the olive oil bottle. 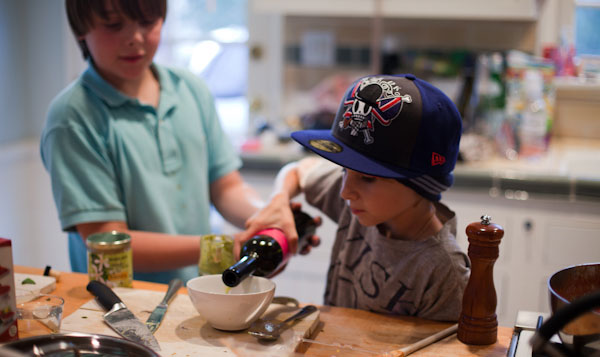 Teamwork to pour just enough and not too much olive oil into the bowl. 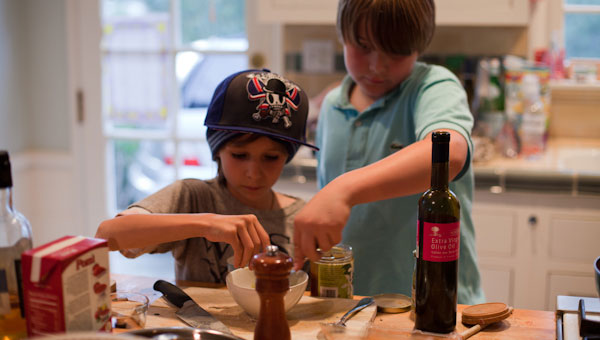 A lot of mixing and seasoning with fleur de sel and freshly ground black pepper. 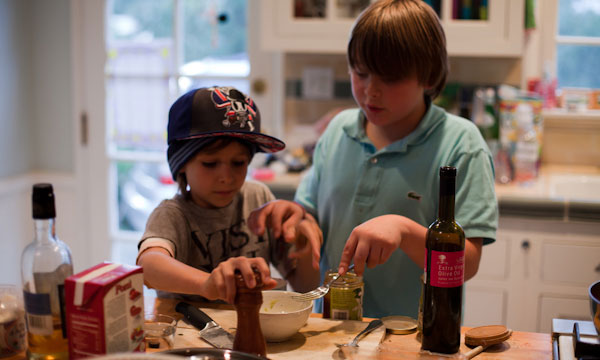 And lots of tasting and intense discussions to get the balance of acid, sweetness, salt and pepper just right. This was a great vinaigrette. 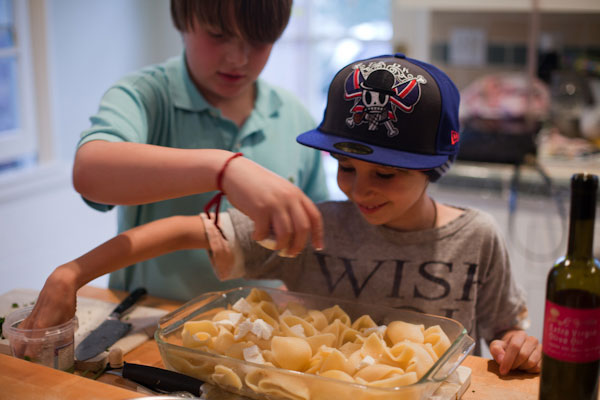 Meanwhile the pasta shells were done – just shy of al dente. After draining off the water they spread them into a large pyrex dish and  placed the buffala di mozzarella on top. 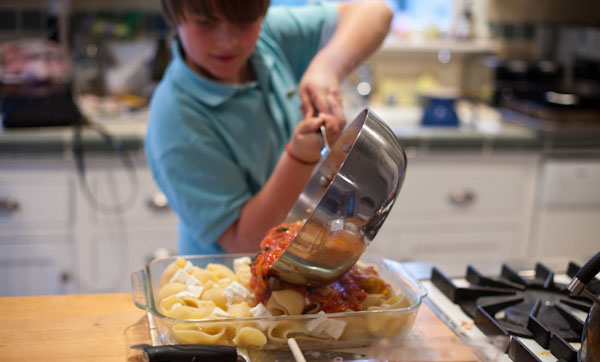 Muscles and height helped when it came to pouring the tomato sauce over the pasta. The dish was sprinkled with some chopped basil, lots of grated Parmigiano-Reggiano and then baked in the preheated oven for  about 15 minutes, until the cheese had melted and was bubbling. 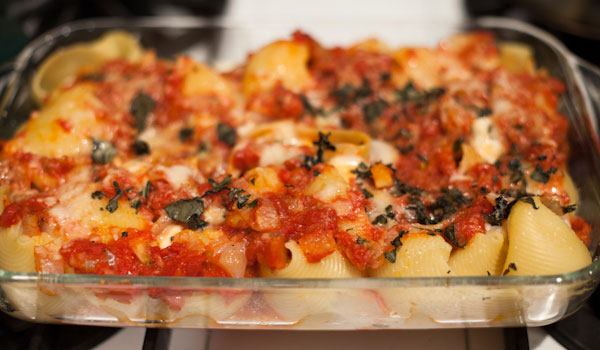 Team work to pour the dressing over the salad. 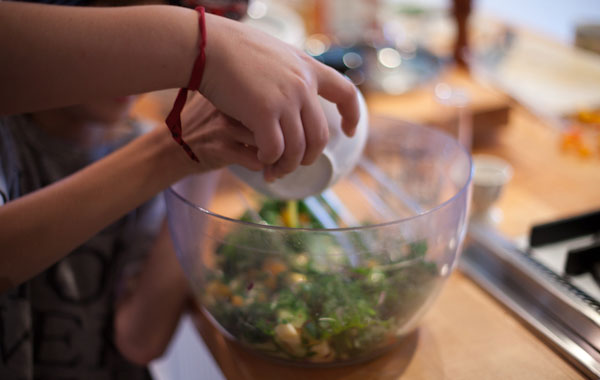 Teamwork to toss the salad. 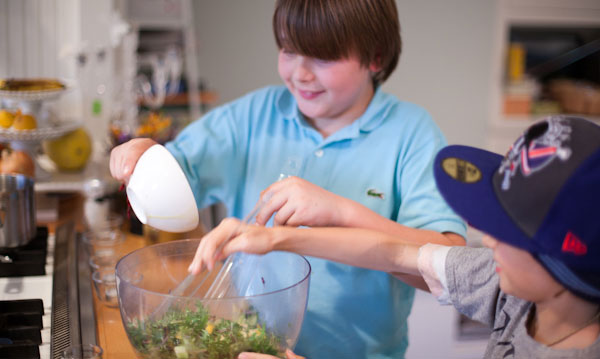 And for dessert? A last minute team decision to whip up a fresh strawberry smoothie – berries, ice, ice cream and yogurt was blended together and then served in sundae glasses with drinking straws. 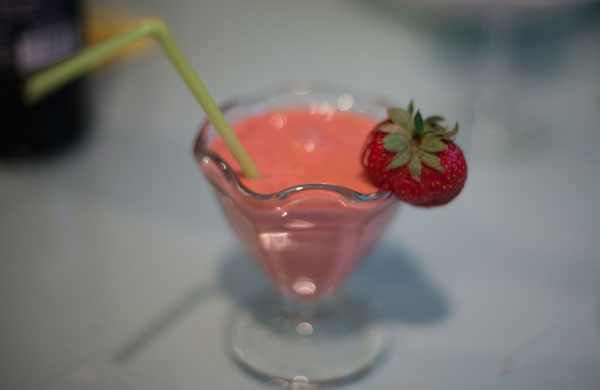 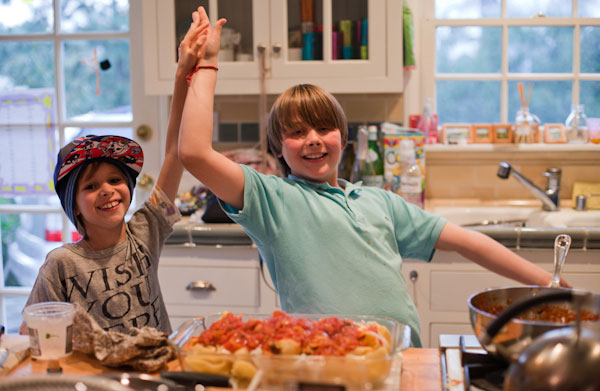