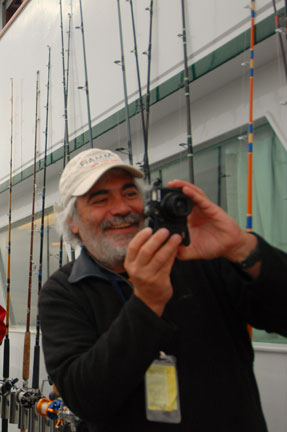 Chef Alain Giraud from Anisette came on board yesterday to fish with vast trays of petits pain au chocolats and croissants (the very same that appeared on Jonathan Gold’s 99 things to eat before you die). The baker Noubar Yessayan, his pastry chef at Anisette, had to get up two hours early in order to have the pastries ready in time for the early morning boat trip. 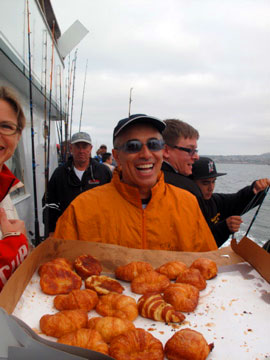 As well as getting the first catch of the day on his new rod – purchased for the trip – he was also unfortunately stung by a scorpion fish. The fins of this prickly fish carry poisonous venom. Giraud was helping untangle someone else’s line when the injury occured. He had to spend some time with his finger dipped in the hottest coffee – LA Mill of course – that he could endure.

Giraud joked that his injury was life threatening. “Will he die Mummy?” Asked Rémy.

He didn’t die and instead went home and after what he called his “Necessary nap” emailed this recipe for the fish that had stung him. Could we call it Chef’s revenge of sorts?

1.   Fish Preparation. Trim the fins and take out the eyes, gills, guts, etc. Remove the head, cut the body into chunks. Rinse the fish under runny water for 1 hour. Marinate for 24 hours with olive oil, saffron, Pernod, halved garlic head.

2.   Make the Rouille. In a Kitchen Aid, combine the yolk, potato and garlic. When smooth, start adding the oil very slowly until very thick. Add the tomato paste and the piquillo puree. Season with the piment d’Espelette and salt to taste. Reserve.

3.   Precook the pearl pasta. Infuse the saffron in the chicken stock. In a large and flat cooking pan, sweat the diced onion and fennel with the olive oil and without coloration. Add the pearl pasta, toasted for one minute and cover with the chicken stock. Bring to a boil, cover and set aside in a warm place for5 minutes. Place on a parchment paper to stop the cooking. Reserve.

4.   Fish soup. Drain all the oil from the marinated fish and keep the garlic. In a narrow and high pot cook the onion, leek, fennel and celery with olive oil and until the vegetables are falling a part. Add the fish, cook for a while, flambé with the Pernod, and add the fresh tomatoes, tomato paste. Add the white wine and cook until reduced by half. Add the mussel juice and chicken stock, the saffron, anise, bay leaf and orange zest. Cook slowly and skim the surface for around 30 minutes. Be sure that the bottom of the pot does not burn. Pass through a food mill with medium sieve, strain through a colander. Boil the soup, rectify the seasoning and pass again a fine chinois. Reserve.

Croutons. Slice longwise the baguette on long strip ¼ inch thick. Rub them with the garlic, brush them with the olive oil and toasted them in an oven at 350 F for around three minutes or until golden. Reserve

Reheat the pearl pasta with the saffron stock. Incorporate the gruyere. Display them on a bottom of a very hot and deep soup plate. Add the squids, sliced and sautéed. Display the croutons on the edge of the plate. Serve the sauce rouille on the side and the soup very hot on the tureen to be pour tableside.

« Fishing with Chefs – Menu
From Sea to Plate »