Rather like tea, marmalade is a favorite of the British and yet unlike many other of the Old World culinary traditions this one was never really fully adopted in the New World. Too bitter, too bitty or just too much of an acquired taste compared to the jars of sweet grape jelly American’s palates are used to?

As well as a favorite for poets like T.S. Eliot and W. B. Yeats, marmalade is the favorite of that English taste-maker James Bond for breakfast, more specifically 007 insists on Frank Cooper’s Vintage Oxford marmalade on his toast. Scott carried Frank Cooper’s with him to the Antarctic and Hillary took it with him up Everest. This is what I remember my father eating for breakfast when I was a child, on thick slabs of Aga toast with generous quantities of freshly churned butter made with thick Devon cream on the farm. My Stepmother, sister and I tended to favor Robertson’s Golden Shredless – not just because it was sweeter but because you could collect the all important golly tokens and send off for prized enamel golly badges (this un PC collection was apparently the longest running collector scheme in history 1928 – 2002).

Alice encounters an empty jar of marmalade as she falls down the rabbit hole, Mr. Badger has jars of the stuff in his winter stores in Wind in the Willows and the Beatles sing about “marmalade skies” in Lucy in the Sky with Diamonds. All English children know that Paddington Bear’s paws, not to mention his head, must have always been sticky from the marmalade sandwich he keeps under his hat and in the poem The King’s Breakfast by A.A. Milne, instead of his usual butter on his bread the King is told “That many people nowadays like marmalade instead.” 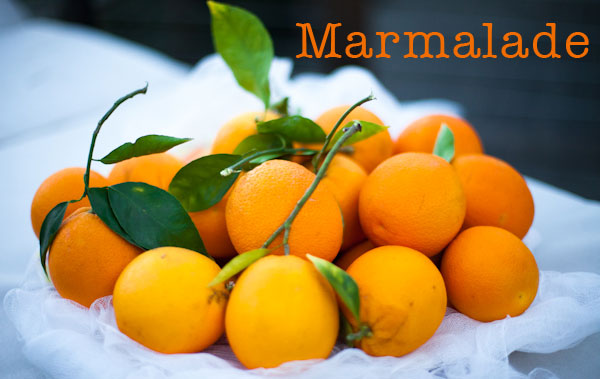 When my neighbor rang on Saturday to ask if I liked oranges and then within minutes showed up with a giant bag that had been picked that morning and I was invited to go to a marmalade making class, all within 24 hours, I knew it was a sign for me to get out my preserving pan and start simmering away. No time to make it to the class sadly, which was all about using citrus fruits such as yuzu, blood oranges and mandaquats, I had to find a traditional recipe elsewhere. As luck would have it my friend Yotam Ottolenghi was visiting and he kindly gave me his recipe for Seville Orange Marmalade – and let me say it was for vast quantities – no doubt enough to supply the walls of the many Ottolenghi cafés with glass jars of the amber sticky stuff, but way too much to fit in my pan or pantry. As is the way when chefs give you recipes there’s a lack of detail in the preparation, they expect you to know the subtle all important techniques, so I also checked out my other two favorite Brits in the kitchen – Delia Smith and Nigel Slater – and here’s what I came up with – a mish mash of all of them.

The whole process isn’t difficult but it does take two days – and it’s worth it for the aromas that fill the house and the slowing down to capture the essence of fresh fruit into a sticky delicacy for breakfast in the weeks and months to come. The oranges I used were not Seville but rather the sweeter variety more common here in Los Angeles  – I hear a sharp gasp and Churchill tut tutting (he insisted on importing Seville oranges from Spain during the World War II for morale). I reduced the amount of sugar and the addition of the lemons kept it sharp and gave it additional pectin – for that all important set.

The finished marmalade is thick, sticky and bittersweet, with a rich caramel depth of flavor. I find it hard not to eat it straight from the pot with a teaspoon. Now I have to find a great gluten free substitute for the hot buttered toast or English muffin that it’s crying out for – any ideas? Polly put that kettle on – we need a cup of PG… The 10 pots it makes means there’s enough to share – the perfect hostess gift or the next time someone rich does something nice for you, “You give ’em a pot of jam.” (Six Degrees of Separation). 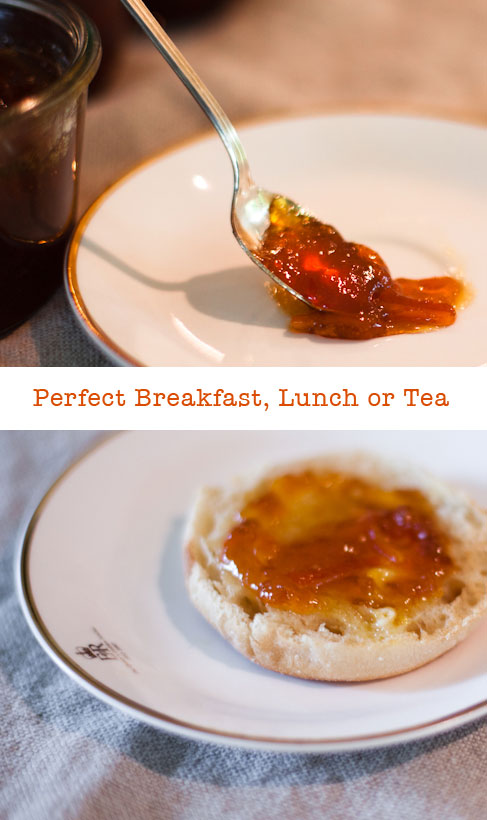 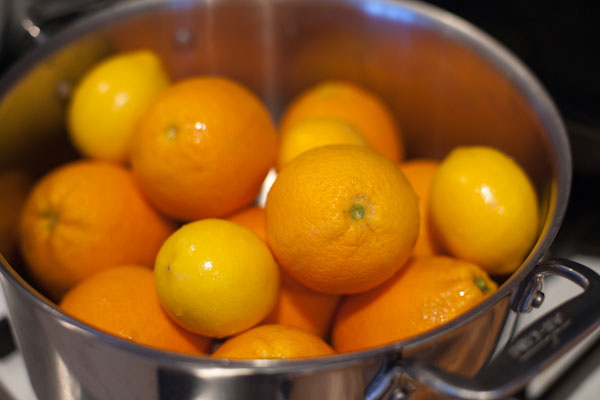 1. Scrub the oranges and lemons and place in the preserving pan with the water. Bring to the boil and then turn down the heat and gently simmer for 2 – 3 hours until soft. You will need a tight fitting lid so that the fruit gently poach in the liquid without it all evaporating. Delia suggests using aluminum foil to seal the top. [The rind has to be softened BEFORE the addition of any sugar as this arrests the softening process.]
2. Remove from the heat and cool in the liquid.
3. Lift the oranges out of the cooled liquid and over a bowl cut in half and scoop out the pulp and pips into a medium saucepan. Reserve the peel. Do the same with the lemons but discard the peel. Add 1 pint of the poaching liquid and any juice that was caught by the bowl to the fruit pulp and simmer over medium heat for 10 minutes.
4. Line a large colander with a piece of cheesecloth and place over a bowl. Strain the pulp from the saucepan into the cloth and leave it to cool as it drips through. 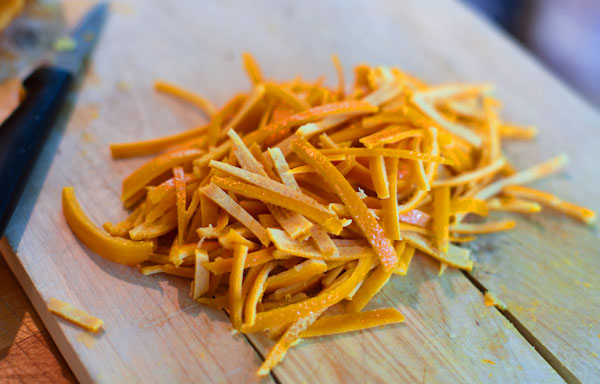 5. Meanwhile, cut the orange peel into thin strips and put back in the preserving pan with the poaching liquid.
6. When the pulp has cooled gather up the corners of the cheesecloth and twist it into a ball. Squeeze really hard to get all the pectin rich juices into the preserving pan. Discard the pithy membranes. Stir the poaching liquid, peel and pectin and then cover with a tea towel and leave over night. 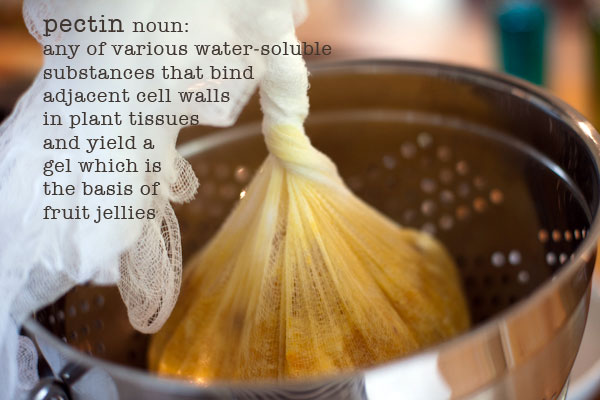 7. The next day, heat the oven to 300 F and in a large roasting pan lined with aluminum heat the sugar for 10 minutes.
8. Heat the contents of preserving pan over medium heat and add the warm sugar. When all the sugar has dissolved in the warm liquid you can turn up the heat, but not before. [If you let the marmalade boil before the sugar is dissolved it won’t set properly and the marmalade will be sugary.] 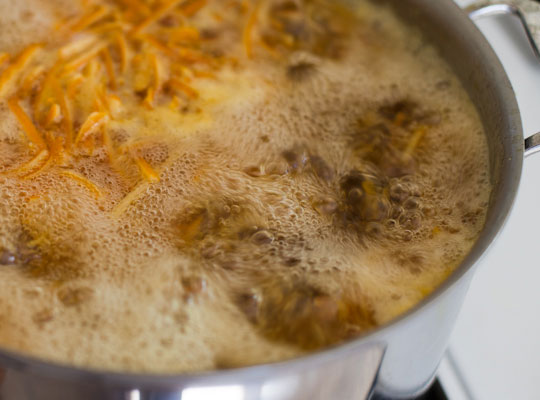 9.  Let the marmalade boil and bubble for 2 hours – what Mrs. Beeton would have called a rolling boil. Put a small plate in the freezer to cool after 2 hours. After 2 1/2 hours test for a set by placing a teaspoon of the marmalade on the chilled plate. After it has cooled for about a minute push it with your finger to see if it crinkles up with a skin. When it does this the marmalade has reached setting point and you can remove the pan from the heat and let cool for 30 minutes – this helps the rind set throughout the marmalade rather than rising to the top. 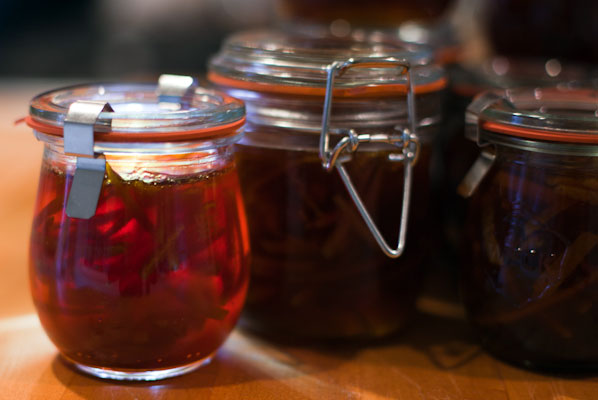 10. Ladle the marmalade into a large Pyrex jug and pour into the jars (this really makes more sense than using ladles, jellyspoons or funnels to get the hot marmalade into the small opening of the jar). Top with the lids and as the marmalade cools and sets up it should create a seal. Once sealed the marmalade can be stored for many months, best out of direct light and in a cool place.