Cherry Bombe’s 100th taping, Moments of Grace with legends Nancy Silverton and Ruth Reichl was inspiring, insightful and downright hilarious – The Nancy and Ruth Show – needs to go on the road. 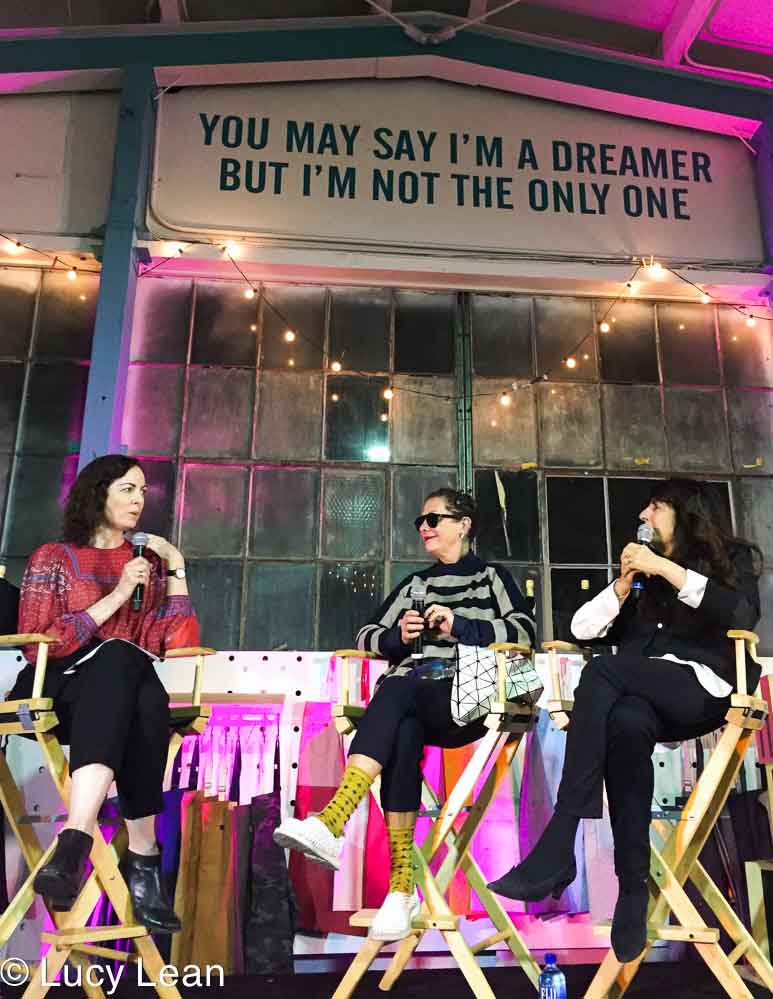 Last night I was privileged to be in the room where it happened – Moments of Grace with Nancy Silverton and Ruth Reichl. Cherry Bombe was celebrating 100 episodes of its radio show with Kerry Diamond interviewing Nancy Silverton and Ruth Reichl. Cherry Bombe is one of those rare beings – a beautiful biannual food magazine that celebrates women and food—”those who grow it, make it, serve it, style it, enjoy it and everything in between. It is about sustenance and style and things that nourish the mind, the eye and, of course, the stomach.” In the cavernous colorful warehouse that is Hedley and Bennett a who’s who of the LA food scene (mostly women) gathered for drinks, food and most importantly to listen to two very good girlfriends talk about their lives in the world of food.  They did not disappoint and to crown it all Nancy, Ruth and Ellen did a #JumpforJoy – my work is done! 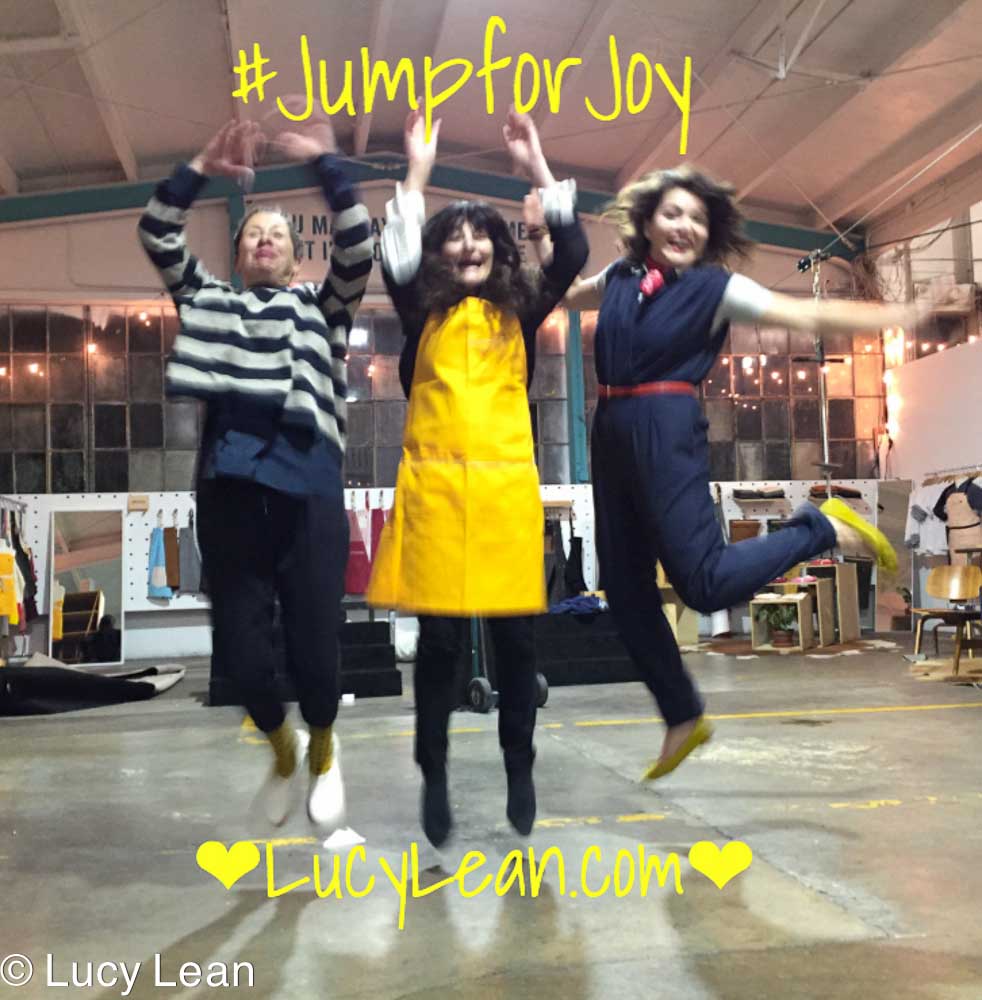 The evening began with Ellen Bennett, founder and CEO of Hedley and Bennett, swooping in on her zip-line. She can check that off her bucket list!  Ellen then proceeded to give us a pep talk – pretty and sassy and bad ass, dressed in a chic navy blue jumpsuit with red belt she read inspiring quotations off brightly colored cue cards. Ellen’s effervescence is intoxicating – she’s enthusiastic, elegant  and always on, rather like the Energizer Bunny.  I wonder if she ever runs out of batteries? 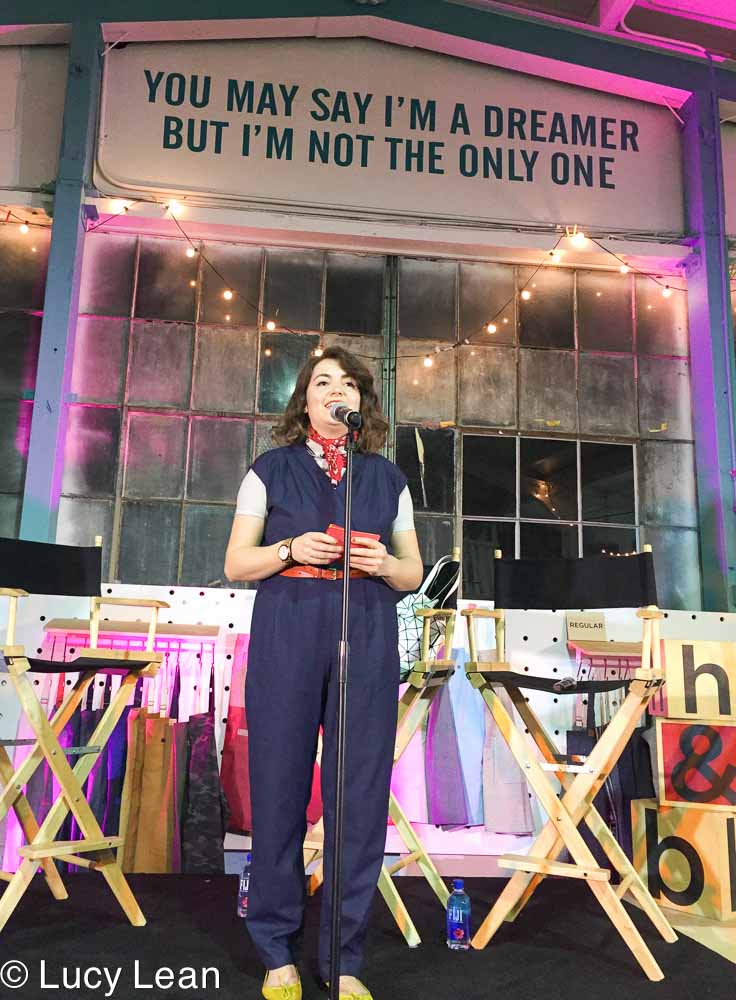 Do the Ellen Hustle:
1. Wake up and Fight
2. If the door isn’t open, climb through the window.
3. Be scrappy, you are stronger than you think you are,
push through the nasty parts.
4. Hustle your heart out.
5. They aren’t bumps in the road, they are the road.

Next up we were treated to a reading by Stephanie Danler, author of the bestselling novel Sweetbitter who read about a briny seduction in the seafood walk-in. Sweetbitter has been described as the Kitchen Confidential of our time – a coming of age story set in the New York restaurant scene. I can’t wait to read it. 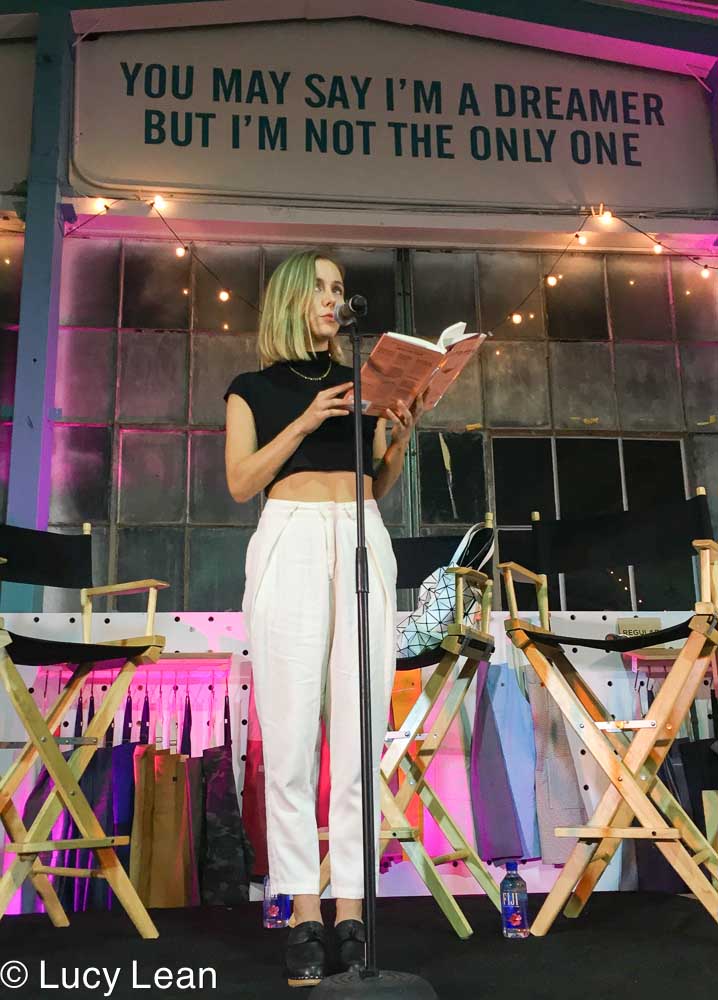 Kerry’s interview of Nancy and Ruth was full of amusing stories and anecdotes that you could only get with two very close girlfriends reminiscing together. They had the audience in stitches. Kerry said Nancy was living up to her rockstar status as she put on her sunglasses to avoid the glare of the lights. 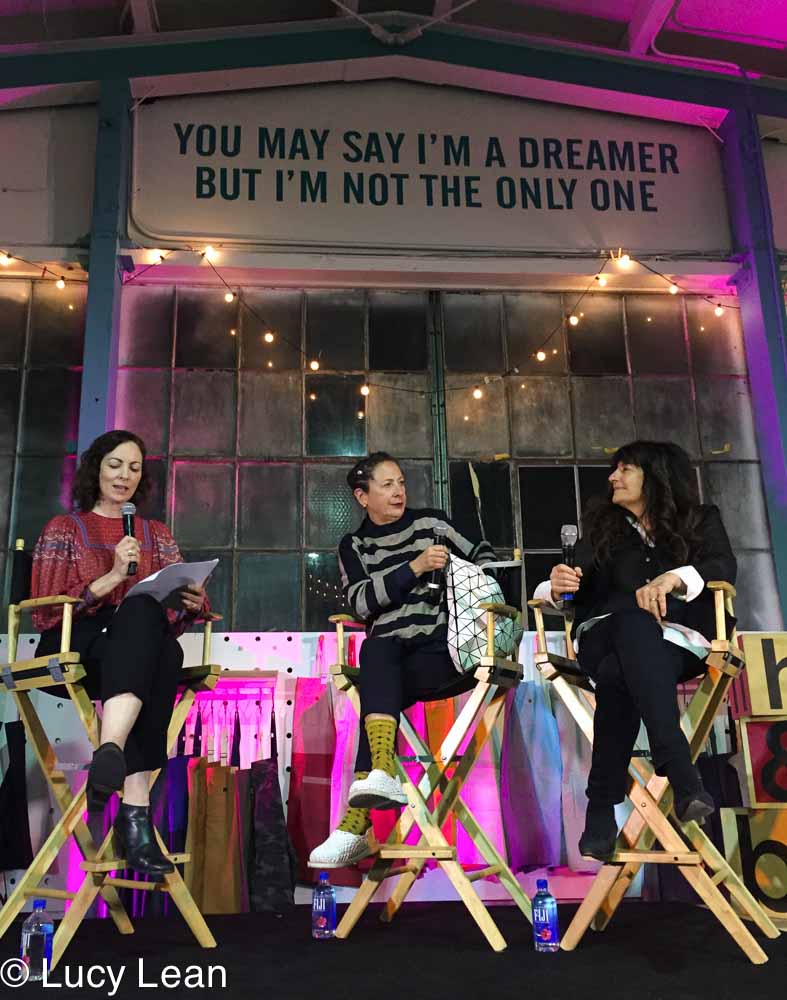 “The Importance of Family Dinners, Not About the Food”

Ruth took us on a cross country road trip from the Lower East Side to her hippy days in Berkeley California.  She and her husband lived on $3,000 a year in a commune they started with friends, growing vegetables and then opening a restaurant together.  In contrast Nancy talked about growing up longing for convenience food, like Rice-a-Roni, as an antidote to the awful school lunches her mother literally threw into a bag for her. Nancy’s mother wrote General Hospital and Nancy said she had never watched it and learned too late that her mother wished she had. Nancy’s family came together for dinner every night but it wasn’t for the food, rather the conversation, the cases her attorney father had won (yes, he usually won) and her mother’s experiences in the writer’s room. She highly recommended everyone shares family dinners if they aren’t already.

“I invited her to dinner.”

Ruth and Nancy became friends when Ruth came to LA as the Los Angeles Times Restaurant Critic and someone rang Nancy to say please look after Ruth as she had no friends! “So I invited her to dinner,” said Nancy. Ruth said she never reviewed any of her new BFF’s restaurants for ethical reasons, it was just too hard to be subjective.

Nancy talked about the trials and tribulations of shooting Chef’s Table season 3 for Netflix, that airs February 17th. They shot 10 hours a day for 10 days and her biggest worry was how they were going to tell her story given that she doesn’t own an island a la Francis Mallmann or a farm a la Dan Barber. She explained that it came about when she met Dominique Crenn at All-Star Chef Classic, the event I co-founded, when they cooked together. She was asked to talk about Dominique for her episode of  Chef’s Table. Nancy went to San Francisco to tape Dominique’s episode and shortly thereafter the producer called and said they wanted to film the Nancy Silverton episode. 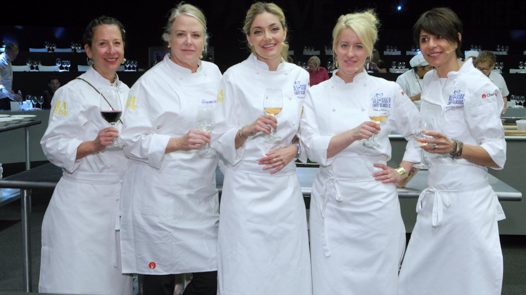 Rise Up! The Politics of Food

Both Nancy and Ruth stressed how political food was for them back in the 7os but somehow as their careers took off it got put on the back burner. Nancy recently marched in the Women’s March in Washington DC for her great aunts – both suffragettes – one chained herself to the White House and was jailed for her actions. Ruth talked about how she had struggled with whether to post on Twitter in recent months in case her “airy fairy” 140 words about her coffee and the weather seemed trivial during dark times. She said that ultimately people had been missing them and we had to “find moments of grace everyday to get through it.”

Moments of Grace with Nancy Silverton and Ruth Reichl

So let’s take a time to find moments of grace everyday – two stand out ‘trivial’ fashion tidbits from last night: As you would expect at a gathering of women in food the fashion statements were everywhere – Nancy and Ruth always look sophisticated and cool, Nancy in stripes with mustard yellow socks and white shoes and Ruth head to toe in black apart from a white shirt.

I sat next to Carolynn Carreño, author of my latest obsession Bowls of Plenty fame, who was wearing the most darling sparkly shoes from Frances Valentine – happy feet. 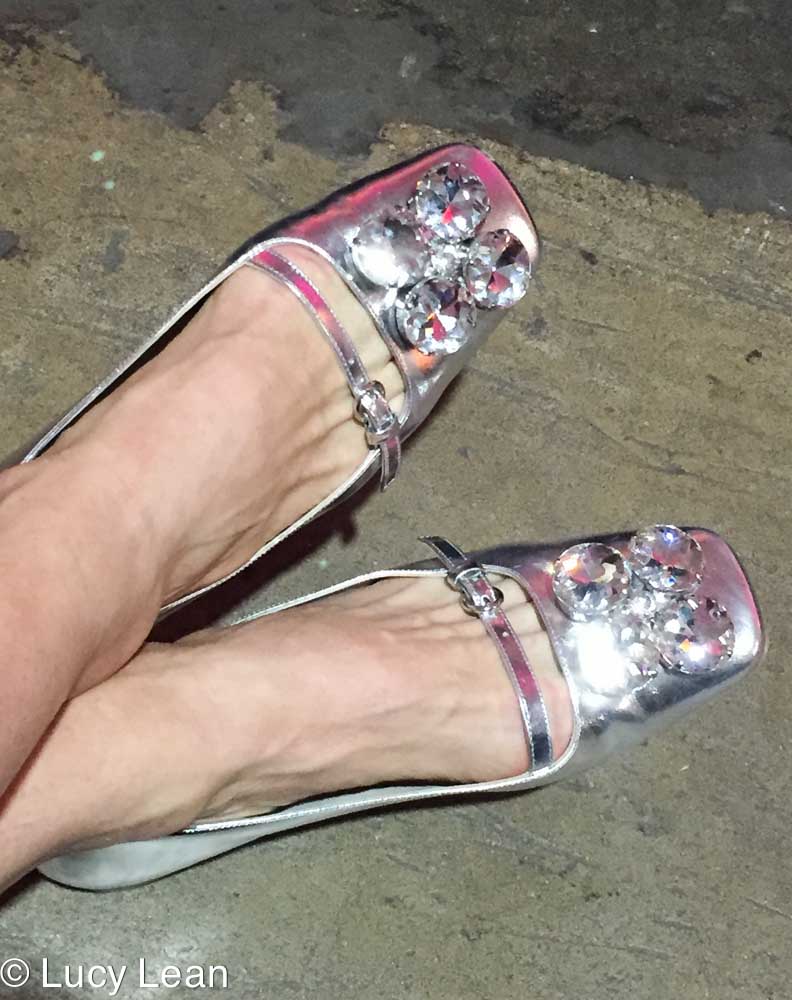 And then there was the publisher of Cherry Bomb who carried the cutest purse made out of the New York Times Dining Section – obviously.  And the only branding we could find on it was a cleverly placed Chanel in print of the paper. 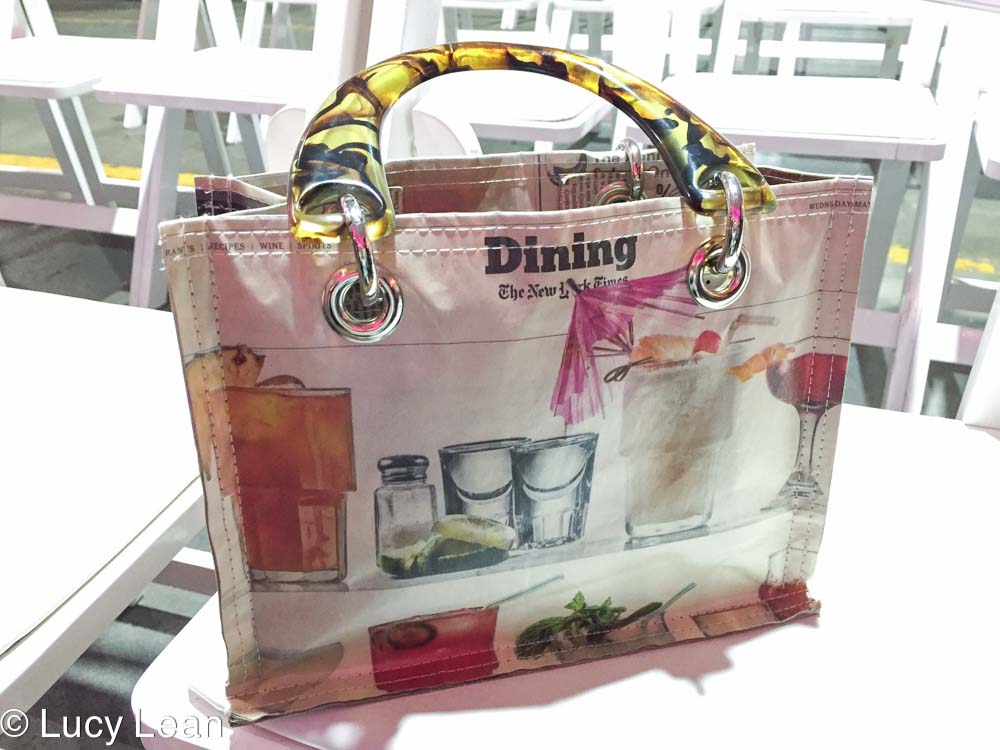 Last night was a true example of women empowering women and I loved every minute of it – thank you Cherry Bombe. I can’t wait to listen to the radio show – episode 100 – and I highly recommend you do too.

You can thank me later!

Leave a comment below with your Moment of Grace today – be it fancy shoes, bags or inspiring words.