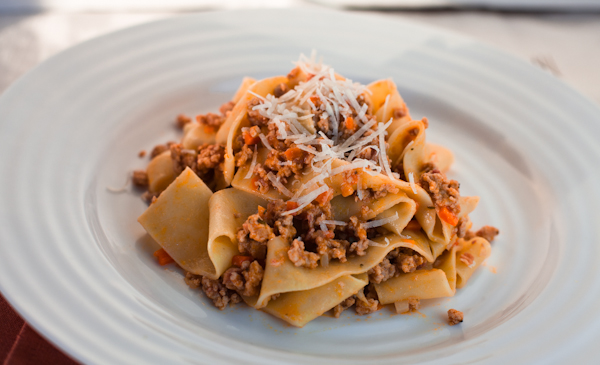 I am now asked all the time “What’s your favorite comfort food?” and depending on my mood, the weather, the time of day and perhaps most importantly the season my answer is forever changing. One thing I do know is that pasta often makes it on to the list, accompanied by a nice glass of vino. You may well think you know how to cook a mean pasta but cook up some of Mario Batali‘s Pappardelle Bolognese (Photographed above and recipe in MADE IN AMERICA)  and not only transport yourself to one of my favorite New York restaurants, Babbo, but realise that every pasta dish you have cooked before just doesn’t match up. But let’s get back to our Dinner Party and take a look at the entrées our guests brought to share, and yes I know that technically pasta and risotto are considered Primi but I’ve kept this American and gathered all these dishes together under Entrées: 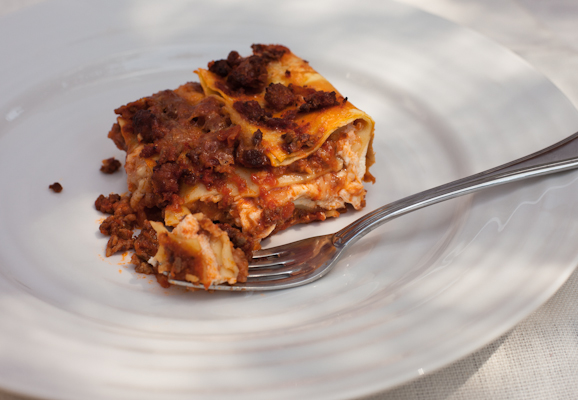 I was so lucky to have the Queen of Italian-American cuisine, Lidia Bastianich, give me her Italian-American Lasagna recipe for MADE IN AMERICA – and even more lucky to interview her when writing the book. She’s smart and funny, knowledgeable and insightful and most of all incredibly generous. Not unlike the woman who chose to bring Lasagna to the table for our dinner party – Susan Salzman The Urban Baker. Inspired after reading Lidia’s story it was exactly what I had hoped this dinner party could be – the book would unify the concept but beyond that everyone could bring to the table what they wanted. The biggest differences between the two versions is ricotta in Lidia’s and bechamel sauce in Susan’s. Both are equally warming and most definitely comforting. [Congrats to Sarah pao e queijo for winning the Made in America giveaway – a signed copy is on its way to you.]

Greg Henry from Sippity Sup joined our dinner with not one but two entries – I was happy to see him post about cooking up Barbara Lynch‘s rigatoni carbonara with guanciale on his recent trip to Palm Springs. As he said in the title of his post – About as comfortable as it gets. This is so super easy to make and so damn satisfying – bacon and eggs and cheese – and not just for breakfast but over pasta – er hello this is as good as it gets. 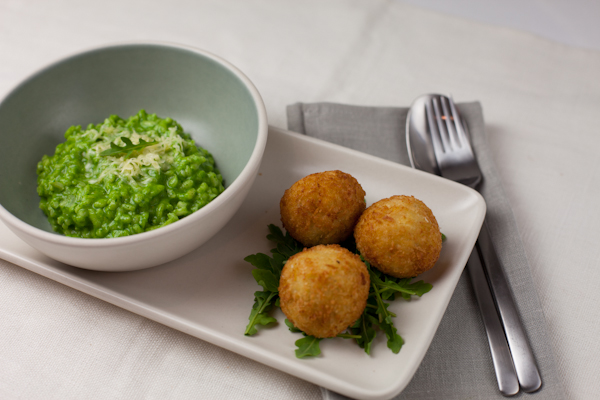 I am calling this course OMG Obsessed Risotto in honor of Miss Gaby Dalkin of What’s Gaby Cooking who just got engaged. Congrats Gaby! Thomas is a lucky man – hope you will serve him the arugula risotto again and again – and now you can say “Even my fiancé – who always wants a protein with dinner, loved this on its own! #win.  Giuseppe Tentorri’s risotto combines puréed arugula with the rice to give a bright green peppery dish that’s delicious and gives you another serving of veggies as well #win! 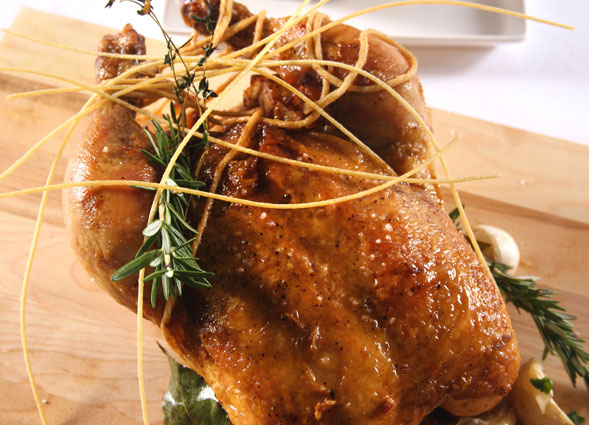 For me one of the most comforting aspects of cooking from MADE IN AMERICA is the aromas released in the process that waft through the house and make you mouth water. There’s a very satisfying feeling when my husband comes in from the studio and says “Wow something smells good!” and you know he’s not talking about my perfume but the chicken I have roasting in the oven. Brooke Burton of Foodwoolf is part of that team that makes your visit to a restaurant pleasurable – she’s a service coach who makes a living training the front of the house to make you feel comfortable. A virtual dinner party is perfect for her because it will fit in with her hours and so I was delighted to get her post about Lemon Garlic Roasted Chicken – a little later to the table but better late than never and for this format no big deal. When I learned she was cooking the chicken I was thrilled – I mean roast chicken appears on many a list of comfort food and Michel Richard’s is one easy juicy chicken to make – you don’t even have to peel the garlic, which is a bonus given that the recipe calls for 20 cloves. 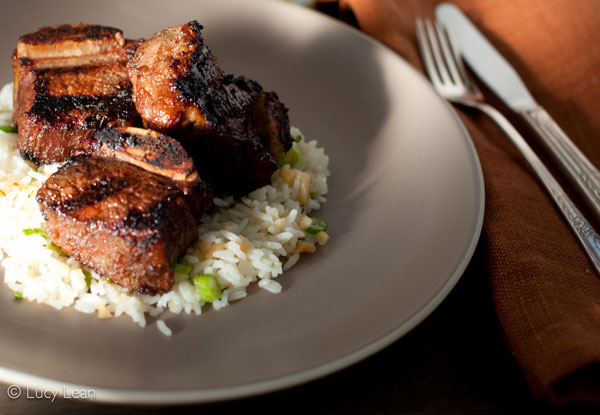 If it wasn’t for my friend Jaden Hair of Steamy Kitchen (and Todd and Diane the White on Rice Couple) there wouldn’t be a Ladles and Jellyspoons and I probably wouldn’t be blogging. A conversation in the park as our kids were playing led to Jaden threatening to buy the domain name Ladles and Jellyspoons and then sell it back to me for 10 x the price if I didn’t do it immediately. Don’t you just love how persuasive some people can be?

Jaden is most definitely a doer – she comes from that Tony Robbin’s school of thought – say you are going to do it and then do it and it’s a great way of going through life. When I started Made in America I had a vague notion that I might photograph some of it – little did I know I would end up taking all the photos – the chefs, the food and everything in between. And not just pushing the button to take the shot but cooking up and then food styling each and every recipe. One of the first things I did before I’d written a word was sign up and buy a ticket to Jaden’s Food Blogger Camp in Mexico so that I could learn how. So thank you so much Jaden – love you whatever outfit you wear and however drunk you get! (I’m thinking cognac at Balthazar that we sipped and you then woke up with no recollection of it – but who’s judging?! ) 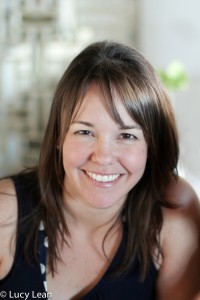 It was Peter Merriman who gave me the recipe for Kalbi Ribs that Jaden chose for our dinner and I’m so happy I will be seeing Peter next week at the Four Seasons Resort Hualalai for our MADE IN AMERICA weekend. And we have a winner from our little contest – Carrie Vitt of Deliciously Organic will be coming to Hawaii for our special weekend with Evan Kleiman and Ludo and Krissy Lefebvre to join Chefs James Babian and Linda Rodriguez at the Four Seasons on the Big Island. Congratulations to Carrie and thank you to all who took part – the chefs really enjoyed reading your entries and selecting a winner was tough. I wish I could take you all – perhaps next time? And yes there is going to be a next time.

NEXT UP Our Virtual Dinner Party PART 3 DESSERTS