I am proud of our selection as one of Babble’s Top 100 Mom Food Blogs – and even though I hate the word “Mom” I will let it pass in this case.

Minty and I made some Lemon Verbena Marshmallows to share with Babble and thought it would be fun to make a video at the same time. The light puffy pillows of sweetness are super simple to literally whip up – although some care must be taken cooking with molten sugar when the kids are around, there is a lot that they can help with.

Lemon verbena reminds me of summers spent in France where we sip on verveine after dinner. It adds a nice citrus flavor to cut though the sweetness of the melt in your mouth marshmallows.

Once it’s in the mixer they will love watching it transform like magic from a hot pale brown syrup to a white, light and fluffy marshmallow. As with any marshmallow the best part of all is toasting some up over an open flame – we like to do this around our fireplace in the winter but it also works over a gas flame on the stove.

If you don’t have lemon verbena you can substitute with a teaspoon of vanilla extract in the cup of cold water. 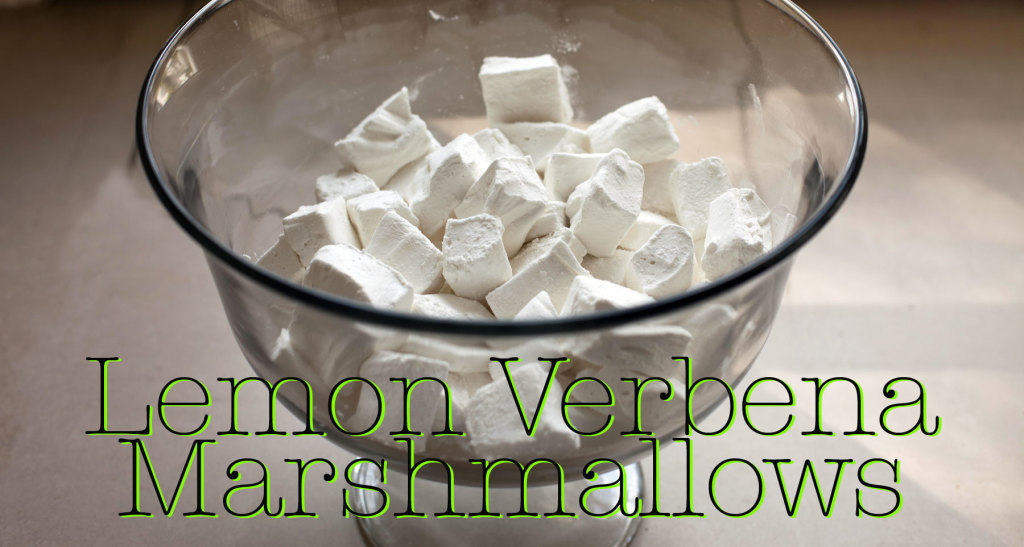 Makes one 18 x 13-inch half sheet pan of marshmallows

2. In a small bowl, sprinkle the gelatin over 1/2 cup of the cold lemon verbena liquid and allow to bloom.

3. Place half the corn syrup (¾ cup), the sugar, and the remaining 1/2 cup of lemon verbena liquid in a small saucepan and cook over medium high heat until the mixture registers 250°F on a candy thermometer. Remove from the heat and whisk the bloomed gelatin into the hot corn syrup. Add the fleur de sel.

4. In the bowl of a stand mixer fitted with the whisk attachment, whisk the remaining corn syrup on low speed, slowly pouring in the hot syrup-gelatin mixture down the side of the bowl. Increase to high speed and whisk until the mixture turns white, doubles in volume, and has the consistency of marshmallow.

5. In the meantime, sift the confectioners’ sugar and cornstarch onto a parchment paper–lined half sheet pan. Set aside about half for dusting.

6. Pour the marshmallow mixture from the bowl and spread onto the prepared half sheet pan. Lightly cover with the some of the remaining confectioner’s sugar/cornstarch. Let set for about 30 minutes.

8. Store marshmallows in an airtight container until ready to eat – best toasted on the end of a toasting fork over an open flame. Will keep for up to a week.