Ladles and Jellyspoons was recently featured on Red Tricycle as one of their favorite top mom food blogs – YAY! It’s a lovely site, and not just because they picked us, it is more than a little bit useful for parents who want to to live a full life with their children and also have a life beyond their children – as the children are sound asleep in their beds and I sit here at the computer tapping away I reach for my latest cocktail [Pouilly-Fuissé mixed with Ginger Ale – okay it’s not quite a Bellini or a Bucks Fizz – but please don’t judge me before you try it – I’m digging this way of drinking white Burgundy right now!] I understand the need to be more than a mummy. 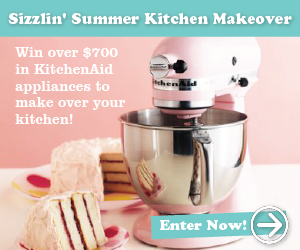 On my first mothers day hubby and I had a big argument – I can’t remember what we were fighting about but I do remember getting Minty in the car and driving to Williams Sonoma in Beverly Hills in a rage. There I purchased a pink KitchenAid – my gift from my daughter who was all of seven months old! Since then I have used that KitchenAid to make a thousand dinners, bake many cakes and cookies, knead bread, whip up meringue and most recently recipe test a 300+ page recipe book, MADE IN AMERICA – and it’s still going strong!

Rémy loves to ‘drive’ the KitchenAid – as seen in this  little video where he revs its engine making English flapjacks and puts it through its paces whilst singing ‘You spin me round and round!’ [Alvin and the Chipmunks has a lot to answer for]:

Now here’s your chance to win over $700 of a KitchenAid prize that includes:

To be honest, I’m not a big fan of the Easy Bake Oven – shhhh don’t tell them that ; )  – I’m of the school that kids shouldn’t dumb down, especially in the kitchen, and by the time you’ve made up the ‘mix’ for the cookies or cake in the Easy Bake Oven you could have made a whole batch of fresh treats from scratch. Most importantly you would know what goes into them rather than those little packets that are chock full of chemicals – but hey – we’re back to that no judging part again and I am in the market for an ice cream maker so I’ve already entered!

The best part is it’s super easy to enter – and as I always say if you don’t enter you can’t win – so far on Twitter contests I’ve won everything from beef to breakfast recipe books to hot sauce and haircuts!

Link for the contest