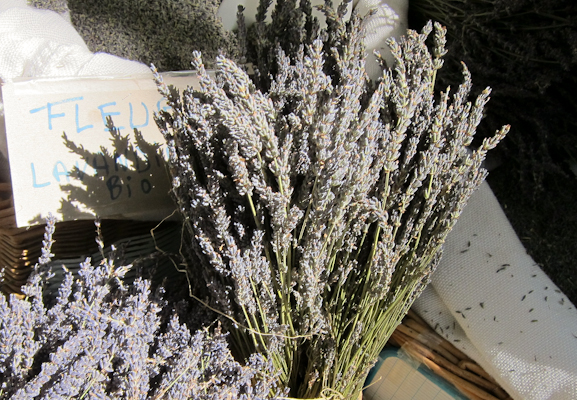 Every year on the 15th of August the village of Sault, in Provence, holds a festival to celebrate a single ingredient – lavender. Minty and Rémy look forward to this every year for one simple pleasure: Ice cream. They each get to choose two flavors – this year Minty chose lavender and lavender and honey. Rémy chose peach with lavender and chocolate and lavender ice cream. 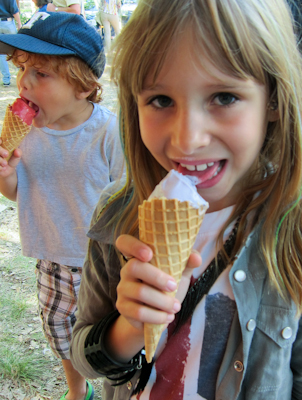 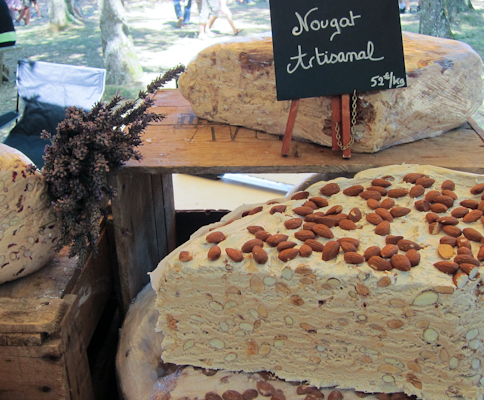 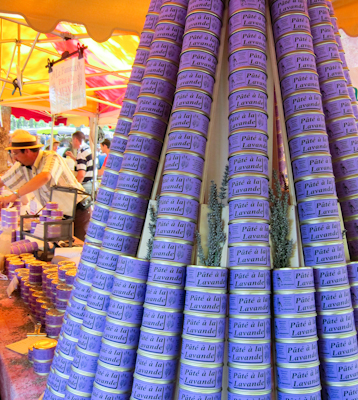 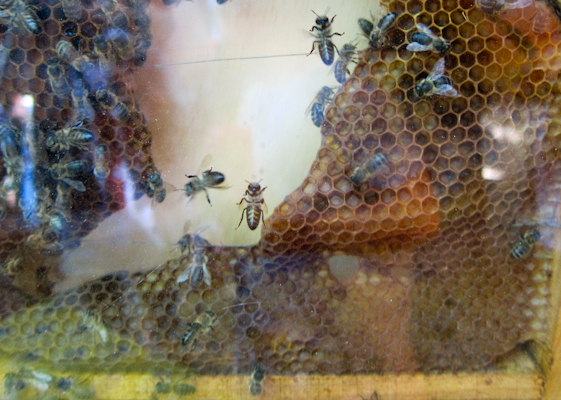 There is also an area where you can learn all about lavender, how it’s harvested, how they extract the scent and the history of the plants in the region – and there’s even a table where the kids can make their own soap. Here Minty and Rémy learned about the plant family that lavender comes from and the difference between lavande and lavender. The family includes rosemary, thyme, sage and the all important herb – Mint! 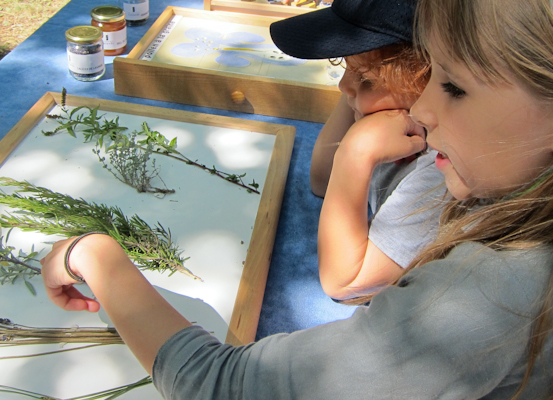 One of my favorite things to do in the summer when I am in Provence is make a lavender wand or two. These simple artisan objects were originally made for brides for their trousseau – so this year with my sister getting married I made this one for her.

Making a lavender wand isn’t difficult – although it does take a little time and practice. You will need about 50 long stalks of freshly picked lavender – the stems need to be green so if you have picked lavender and aren’t ready to make the wand immediately make sure to keep the flowers in water or they will dry out and be too brittle and will break when you bend them over. Here I am with Rémy at the festival in a lavender field selecting the best stalks for my wand. 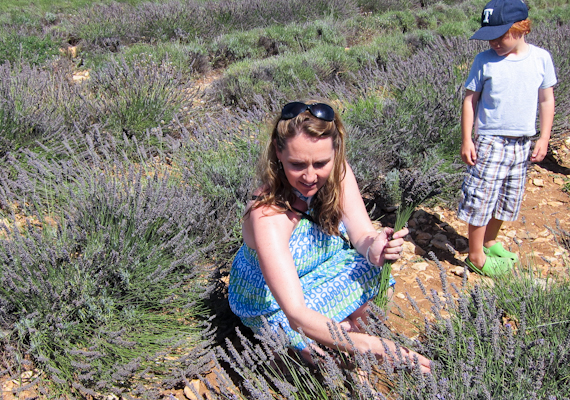 Remove all the extra leaves and tie the stalks in a bunch with the ribbon – leaving a ribbon that’s about 18 inches and the rest of the ribbon on the other end (I like to keep it on a spool because you never know exactly how much you’ll need). 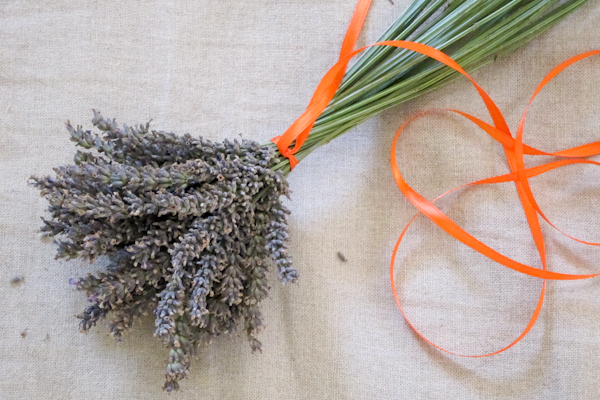 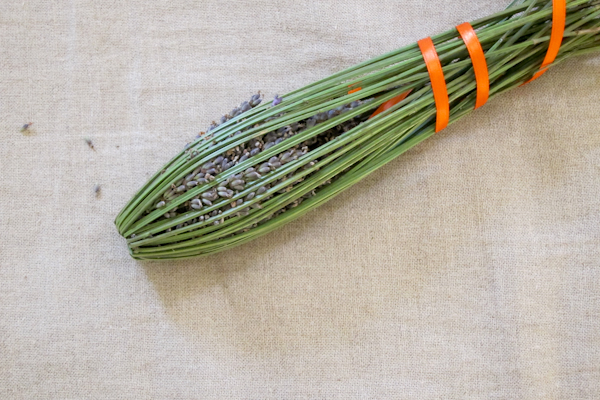 I added a little secret note/wish inside – which apparently is an old tradition. I rolled up this note and tucked it inside. 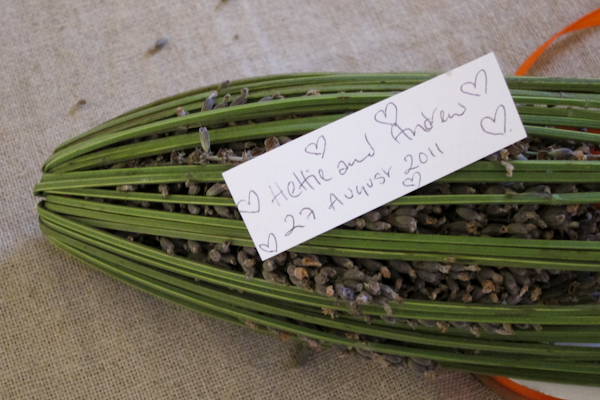 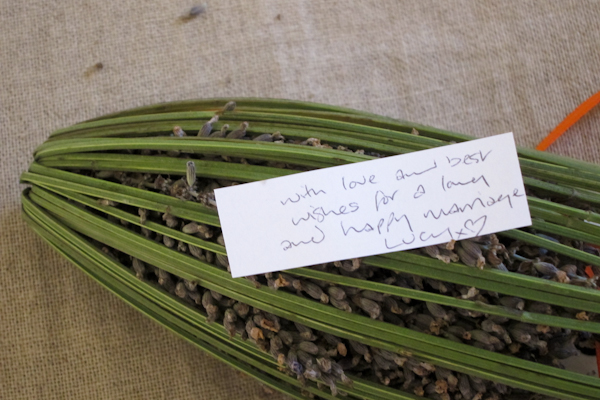 With the shorter ribbon tucked inside carefully weave the longer ribbon around the lavender stalks – working your way under and over two at a time until you get back to the start. On the second row around make sure that where you went over last time this time you go under – sometimes you might have to lose a couple of stalks to make this work out exactly right. 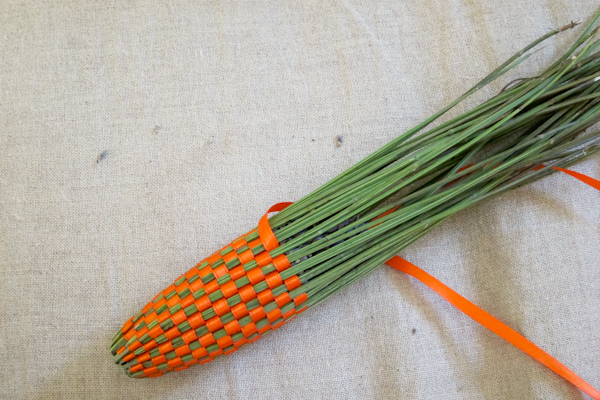 When you get to the place where the entire length of the flowers has been encased it’s time to tie off using the shorter ribbon that was hanging down inside. 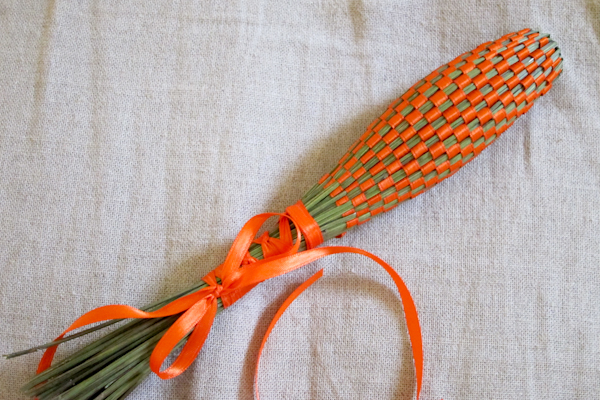 I like to criss cross the ribbons a few times before tying a bow. As the lavender dries out the woven ribbon can become a little baggy – if this happens you can tighten it up by pulling the ribbon through, working from the top down to the bottom.

And there you have it – a lavender wand for Hettie on her wedding day, August 27th. My next mission is to find out how to make nougat – soft, sweet and flavored with lavender – the man at the festival told me it contains egg whites and honey. Has anyone ever made this delicious treat before?

@lyleslondon feel so happy and grateful to dine to

In to the woods…