We set out to sea once more – a boat full of chefs, fishermen, food, beer, wine, cognac, groupies, some salty kids and for this trip only copies of my book – including two very special copies of MADE IN AMERICA that have been traveling around the country for all the chefs to sign. These copies are to be auctioned off for Alex’s Lemonade Stand Foundation – one at the LA Loves Alex’s Lemonade November 6th and the other one on line in December. 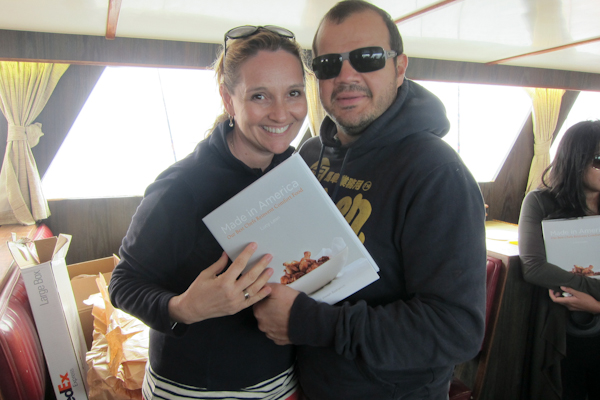 I invited chefs who are featured in MADE IN AMERICA to come with treats to celebrate the release- and if possible to bring the food they had cooked up for the book. They didn’t disappoint as the following pictures will attest. Thank you to everyone who came – for the gourmands aboard and especially to all the chefs for taking the time to sign books (Michael Cimarusti, Alain Giraud, Andrea Cavaliere, Doug Taylor, Brian Moyers, Josiah Citrin, Mariah Swan and Waylynn Lucas) and food and much needed recipe advice. 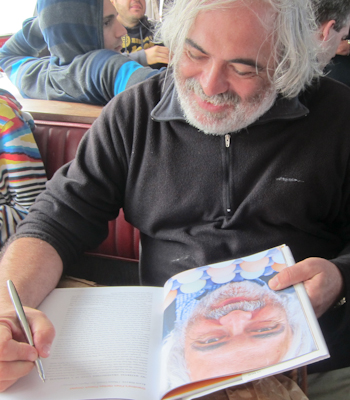 Juan Carlos Kuramoto came aboard to represent Michael McCarty and Michael’s Santa Monica with not one dish but two – both recipes in the book. Cinnamon Rolls and Cobb Salad: 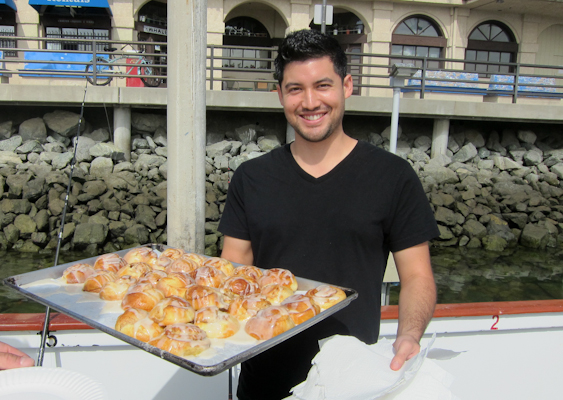 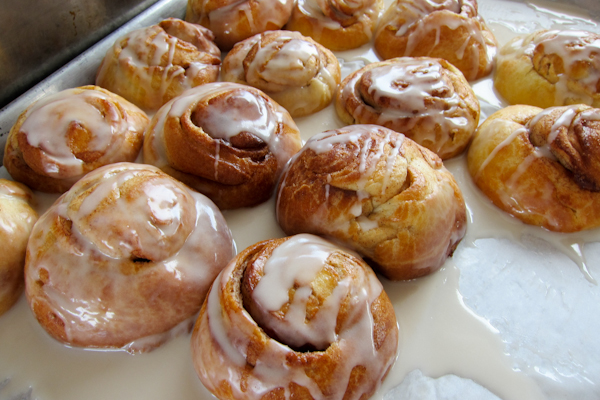 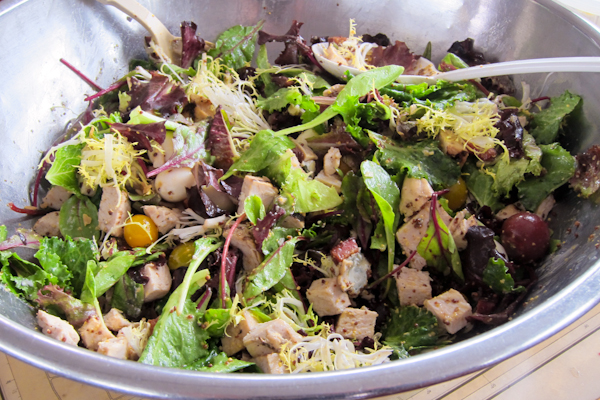 Pastry Chef Mariah Swan was back in the kitchen making up yet another batch of doughnuts after Wednesday’s successful party at BLD – she arrived with a box full to bursting with salt and pepper and brown butter glaze doughnuts. 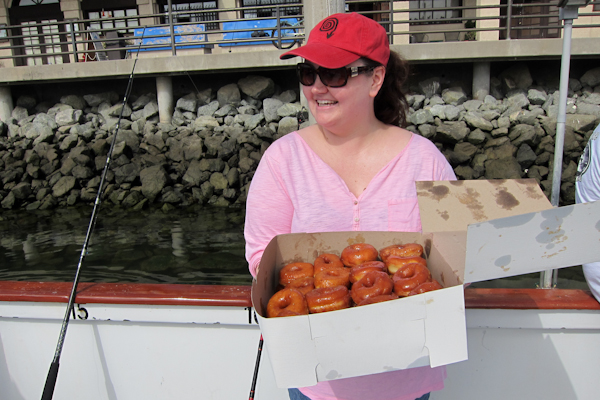 Brian Moyers of BLT Steak gave me a popover recipe for the book but decided to spice things up with a Carolina smoked pork slider with Brussels sprout and Fresno chili slaw – he also brought his pal Nick – chef at the Four Seasons Biltmore Santa Barbara to help him out in the galley. 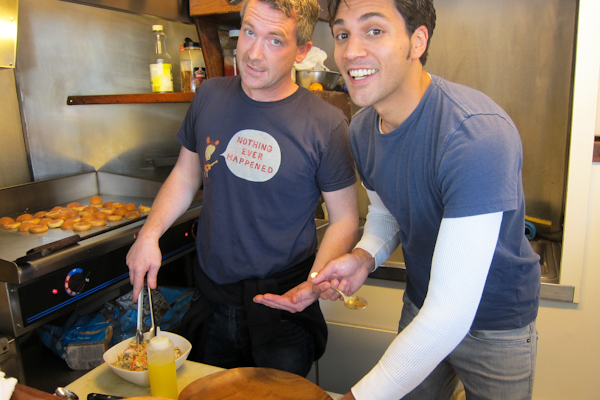 Chef Hussain came aboard to represent Chef José Andrés of The Bazaar at the SLS Hotel. Here he plates one of my favorite dishes in MADE IN AMERICA – the Morralitos – the jicama guacamole wraps – the perfect fresh crunchy bite for our day out on the water. 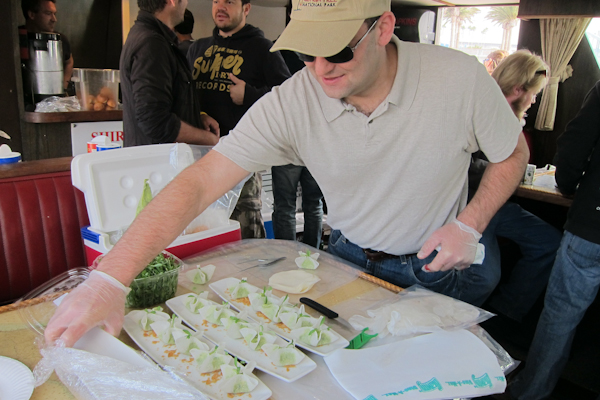 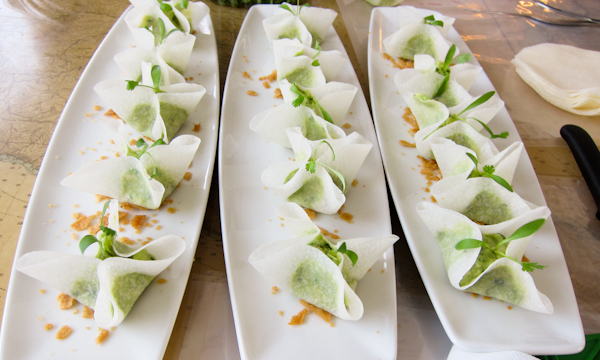 Dave Danhi and I joked about the collection of photos I have of him at the hamburger griddle on the boat cooking up his famous mac n cheese rib grilled cheese sandwich – each one identical – apart from the hat and the layers of clothing. Now this particular grilled cheese recipe isn’t in MADE IN AMERICA – but it just wouldn’t be a fishing trip without his classic – the sandwich that started The Grilled Cheese Truck. 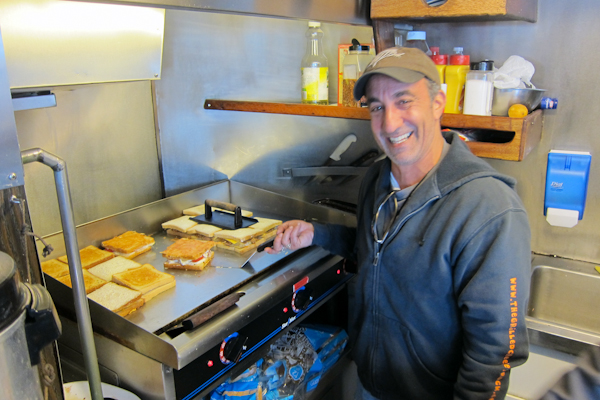 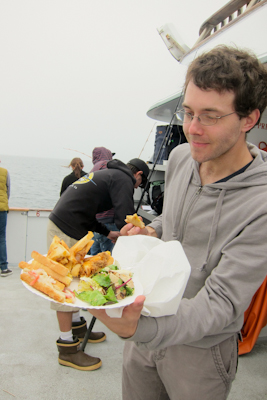 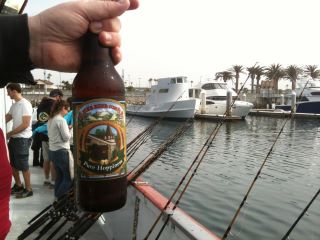 I’m not a big beer drinker – as you may well know wine is much more my thing – especially if there are bubbles – but I have a new found respect for this beverage and will definitely be visiting them at their beer retail shop and tasting bar in Echo Park. It’s particularly close to school – half a pint before pick up with a few mummies? Just how much alcohol is there in a Pure Hoppiness anyway? Time for a designated driver no doubt?

A classic #GoFishLA food item – Andrea ‘Cecconi’ Cavaliere’s Kobe Truffle Sliders – these are THE hamburger to end all hamburgers and I’m thinking of making an addition to MADE IN AMERICA when we reprint – they are SO good (why didn’t they go in?). In attendance to portion out just the right quantity of truffle not one but both of the Truffle Brothers – Michael and Marco. 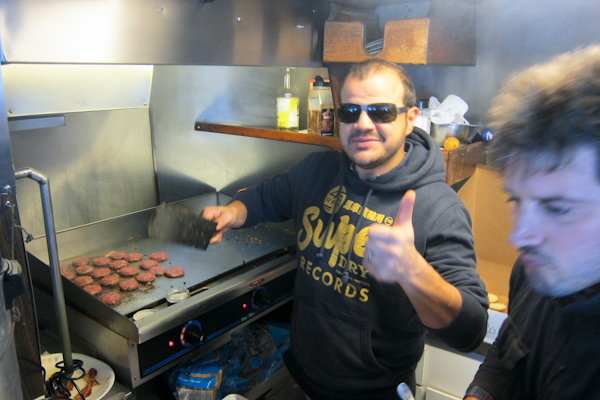 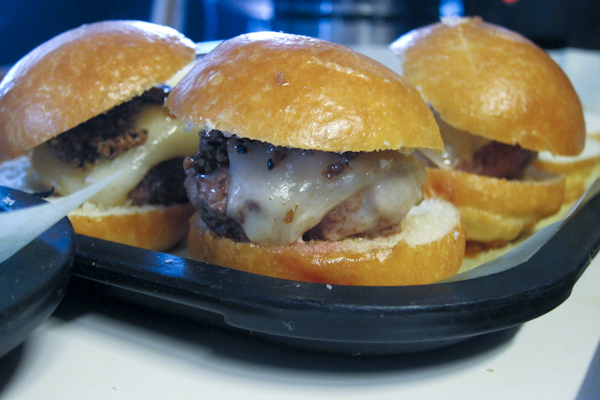 Josiah Citrin of Mélisse was ever so generous in giving me his mushroom soup recipe for MADE IN AMERICA – which I carefully and respectfully simplified for my book. For the fishing trip he, as is his way, reverted back to the full on experience with the mushroom hash as well as mini quenelles of truffle mouse to top off the rich velvety mushroom soup. 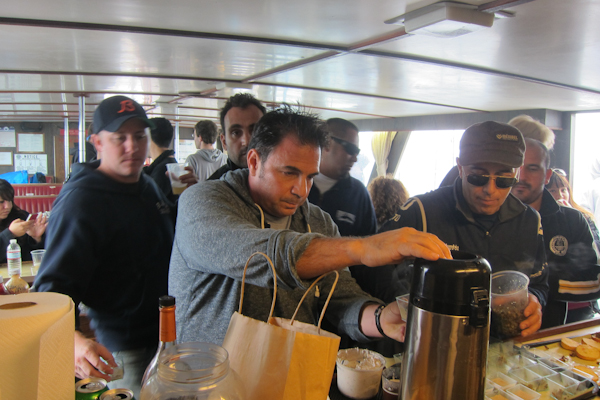 Pure decadence and the quintessential dish – if only a few of the MasterChef hopefuls would take a lesson from this man and cook up a seemingly simple soup with such depth of flavor – many on the boat praised it as the best dish of the trip. 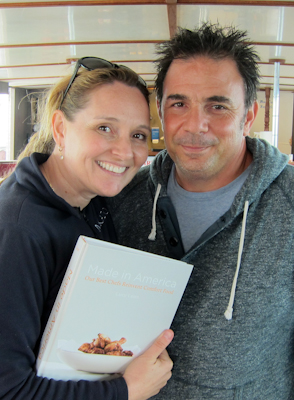 This really is a nod to his soon to be released book In Pursuit of Excellence which I can’t wait to cook from when it’s released next month – it’s an elegant book full of inspiring recipes and exquisite photographs – but then I would expect nothing less from this 2 star Michelin chef who’s an America treasure. 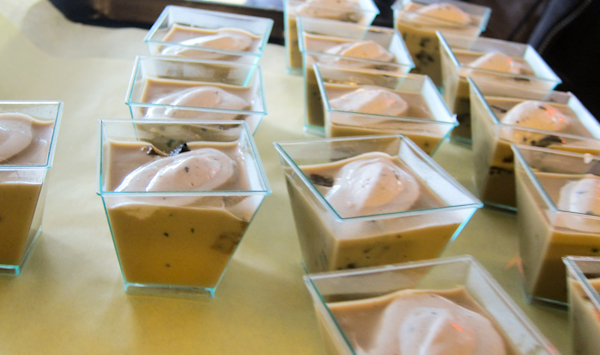 The menu on this trip was one favorite after another, each one tapping into pure comfort, extreme sophisticated indulgence and American cuisine at it’s very best. I was reminded of the Best Thing I Ever ate show – although in this case each and every recipe in my book is a BEST THING I EVER ATE – seriously! How else do you think all these chefs made it in? Nepotism?! 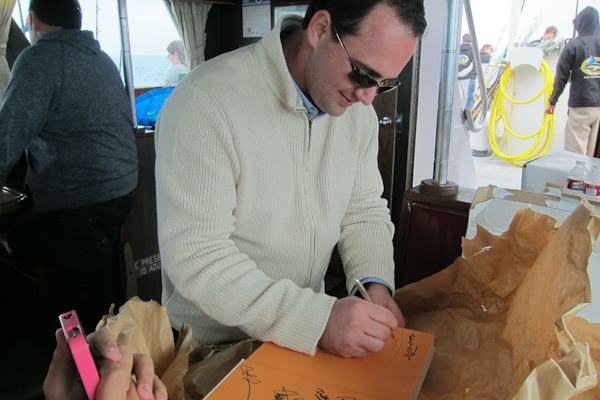 This was summed up by the two cookies we ate on the boat. First we had the grand old favorite from Michael Cimarusti – the salty Valrhona chocolate chip cookie from Providence and please let it be known that I worked harder to get this particular recipe than any other in the book and failed miserably – another page to be added to the next print run?! The new kid on the block, flown in with Doug Taylor from B&B Restorante  in Las Vegas (Mario Batali and Joe Bastianich’s Vegas restaurant) was a double chocolate with espresso cookie that he’s giving me the recipe for so I can share… YAY!!! Thanks Doug – can’t wait to cook up a batch of these and share them – SO SO SO good. Another best thing I ever ate to add to the ever increasing list (and waistline). 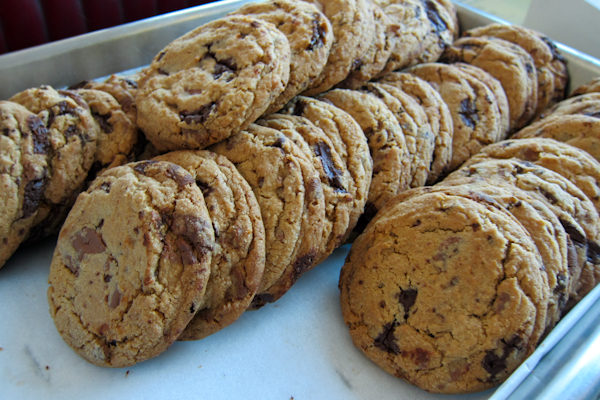 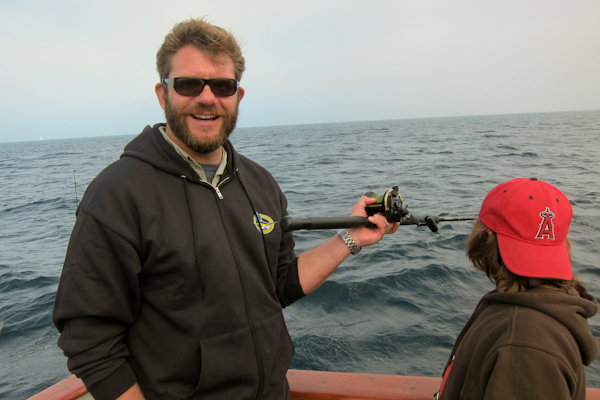 And yes, as well as eat, we really did fish… Here Donato Poto holds up the first catch of the day – a tiddler if ever I saw one – hardly enough for  fish taco. 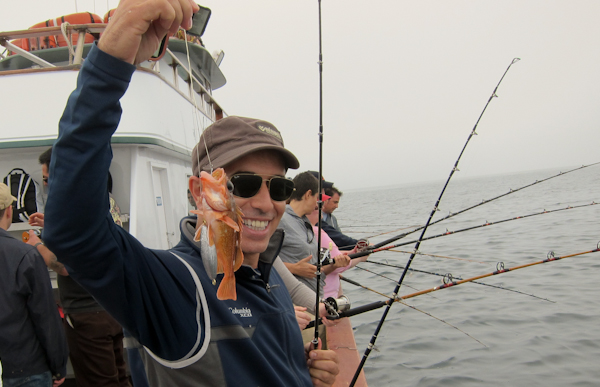 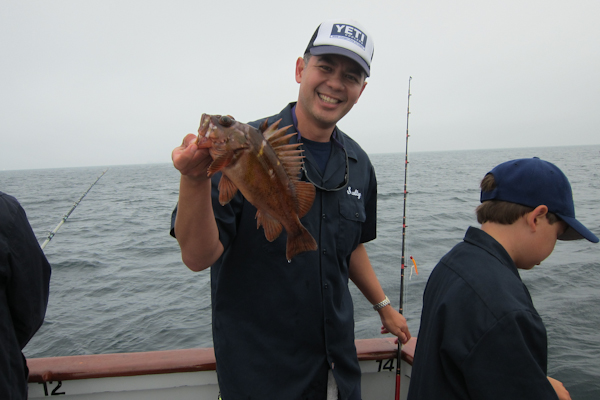 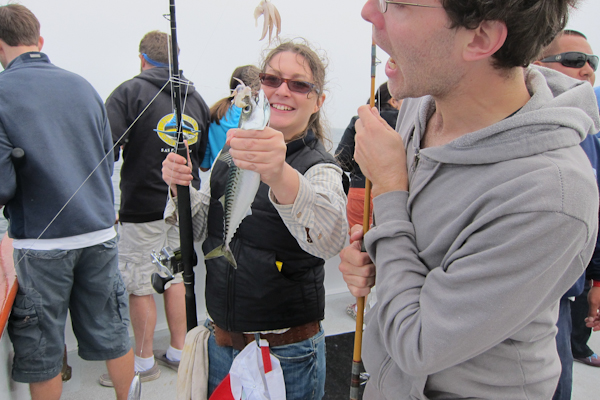 For some it was their first time – like Lindsay from LAist: 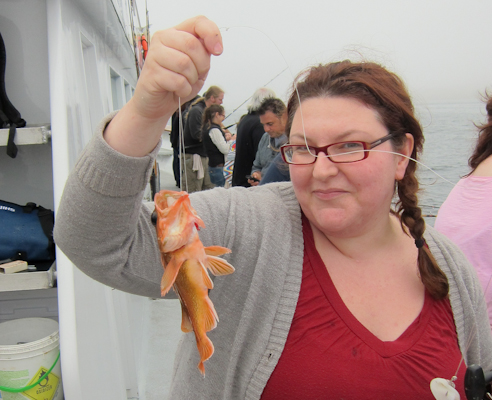 And Jeff of Cooking for Geeks fame: 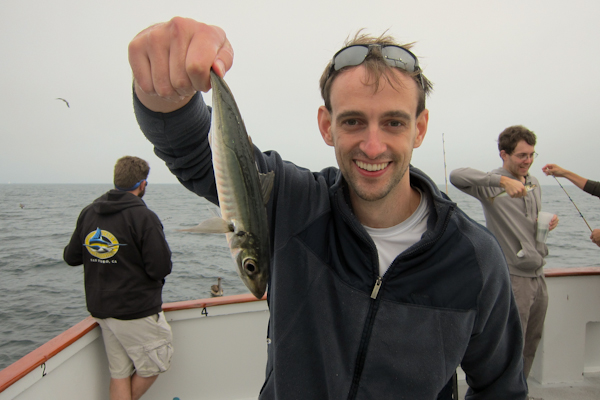 And for others – shall we say the more experienced despite age – this was their day to shine: 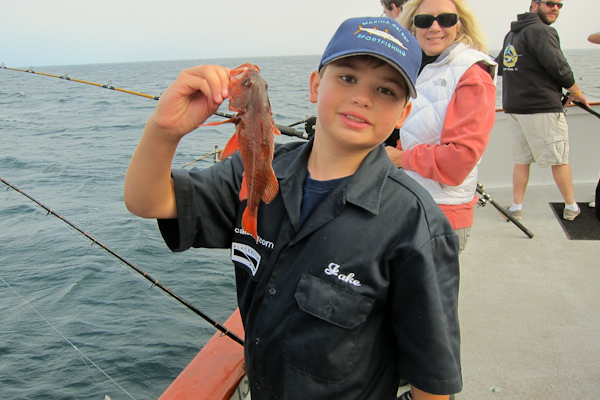 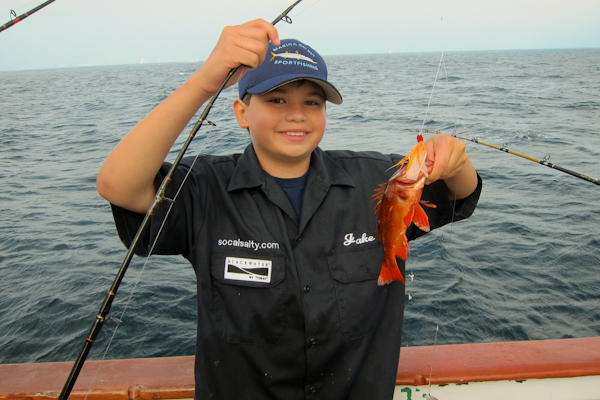 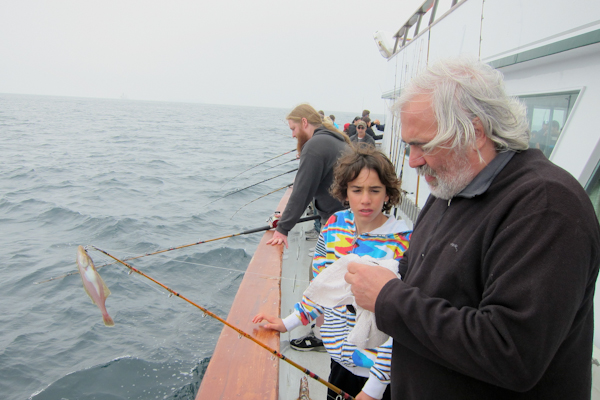 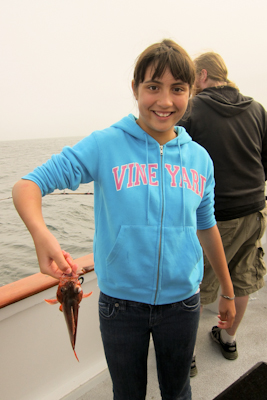 And who won the jackpot and a bottle of 1738 Rémy Martin for the biggest fish? A #GoFishLA veteran Mel – and I didn’t manage to get a picture of her with her winning fish but I did snap this pic of her with her prize… Good job she outfished the juniors on the boat for that other Rémy in my life – Rémy Martin Champagne cognac. Perhaps she’ll be recreating the cocktails we drank on the boat – my reinvented version of an American classic, imported from Bermuda and adopted by the East Coast sailing community – the Dark and Stormy. My version is a no nonsense super easy to mix cocktail made with Rémy Martin and Ginger Ale with an optional slice of lime – our signature easy to make #GoFishLA tipple (that’s in need of a good name – any ideas?) – CHEERS!  And congrats to our winner Mel. 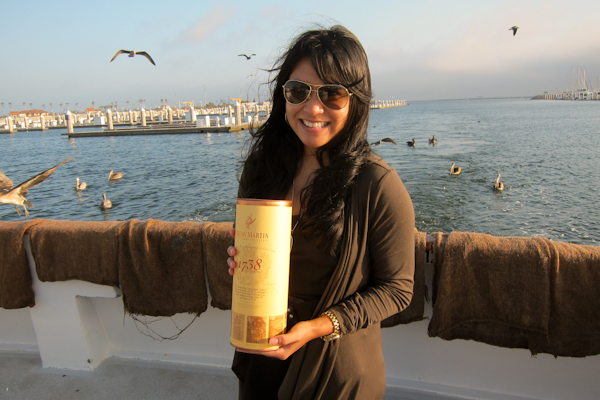