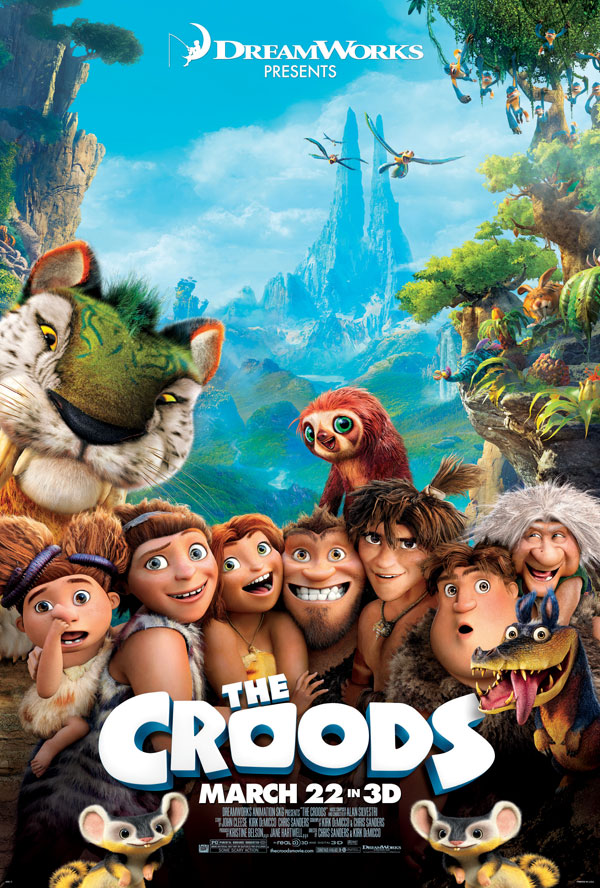 Okay, I feel like I’ve been living in a cave during the Croodaceous Period (somewhere after the Jurassic Age and before the Stone Age) with the world’s first modern family, the Croods. Seriously, why have I never made microwave popcorn from scratch before? It’s so simple and so quick and so easy and there’s really no clean up. 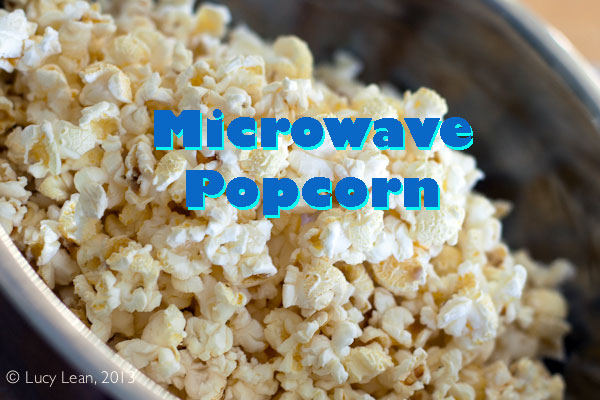 An all natural snack in less than 2 minutes without any of the hidden chemicals, flavorings, coloring and additives found in store bought microwave popcorn. Why bother adding 3 tablespoons of oil and heating it up in a heavy bottomed pan on the stove? Although, you can still do this if you really want or if you don’t have a microwave.

This morning I was recipe testing and having some fun in the kitchen cooking up some ideas for a special Croods Caramel Corn – with nuts and bananas and chocolate crisps and even my favorite fun ingredient – Pop Rocks!

I didn’t have the special ears of corn we used to make popcorn trees but I wondered what would happen if I just microwaved the kernels?  No extras needed – not even the oil – just pop (sorry couldn’t resist) them in a paper bag, fold over the top, place in the microwave and cook on high for about 2 minutes, until the popping slows down… And that’s exactly what I did and you know what? It worked! It’s so simple. I was so excited I rang my friend Krissy (Lefebvre) to share my eureka moment and being the all American girl she is, she calmly said “Oh yes, we used to do that all the time when I was 12.”

I feel like I’ve discovered something so fundamental – like fire or bananas or popcorn even. Which is exactly what happens to the family in the new 3D comedy adventure THE CROODS, starring Nicolas Cage, Emma Stone, Ryan Reynolds, Catherine Keener, Clark Duke and Cloris Leachman and opens March 22.  When the cave that has always been their home is destroyed – with the rest of their world not far behind it – the Croods are forced to set off on the first family road (or path) trip. Rocked by generational clashes and seismic shifts, the Croods discover an incredible new world filled with fantastic creatures, food, shoes and a future beyond any they imagined.  The Croods meet Guy (Ryan Reynolds) along the way and he introduces them to fire. The field of long grass Thunk “hides the fire in” turns out to be a field of giant corn – which as it heats up turns to – well, yes you guessed it – it explodes and showers the Croods in giant white pieces of popcorn. You can see for yourself – “Looks like magic,” says the older brother Thunk. “And smells like food!”

The easy peasy microwave popcorn provides the base to the caramel corn. I then used a simple technique that avoids corn syrup, candy thermometers and molten caramel found in most traditional recipes for caramel corn. You make a syrup with butter and sugar  and drizzle this over the popped corn and then bake the coated popcorn in the oven at exactly 300F. If you have never calibrated your oven now is the time to do so – you want to cook the caramel corn at exactly the right temperature – too hot and it may burn too cool and it will end up sticky rather than have that special crack. The popcorn caramelizes in the oven, fills the house with the sweet smell of deliciousness and reduces the burn risk that usually comes with making caramel on the stove top.  I have added a few special items for a truly spectacular caramel corn that will induce fireworks in your mouth – not unlike the fireworks the Croods inadvertently create when they cook up their first batch of popcorn, so large they can stand on it!

So in a time long before the 1893 World’s Columbian Exposition in Chicago when the Rueckheim brothers unveiled their popcorn and peanuts coated in molasses which they subsequently adapted to make Cracker Jack – the Croods were popping their own giant version of the American movie goers favorite snack. According to What’s Cooking America some of the earliest popcorn was discovered in a cave in New Mexico which carbon dating showed to be around 5,600 years old – let’s just say the Croods were popping many many years before this – some would say millions of years before. 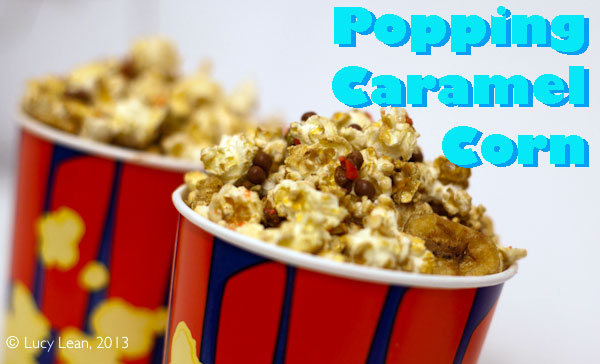 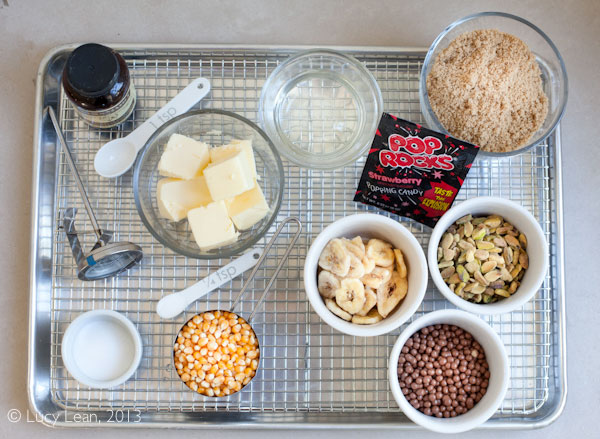 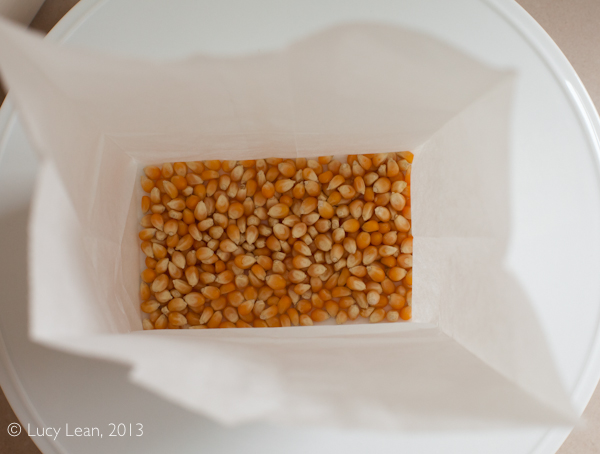 2. Pop the popcorn in the microwave in two batches. Place half the kernels (1/4 cup) in a plain paper bag, fold over the top twice and microwave on high for 1 ½ – 2 minutes until the popping slows down. Be careful not to cook for too long as you don’t want to burn the popcorn. It is important to remove the unpopped kernels – we don’t want broken teeth! 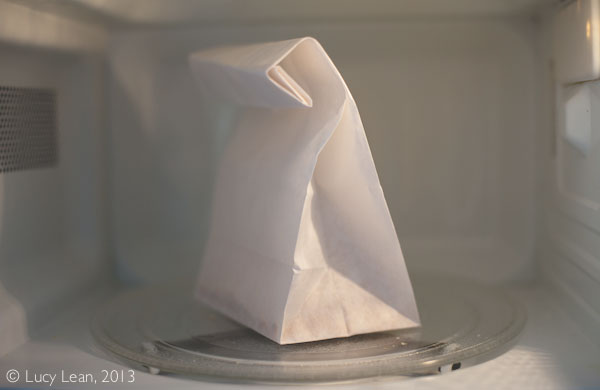 You can place the unpopped kernels back in the paper bag and microwave them again for an extra minute. Discard the really stubborn kernels that still haven’t popped. Repeat with the remaining 1/4 cup of the unpopped kernels. Place all the popped corn (approx 12 cups) in a large heatproof bowl with the pistachios and banana chips. 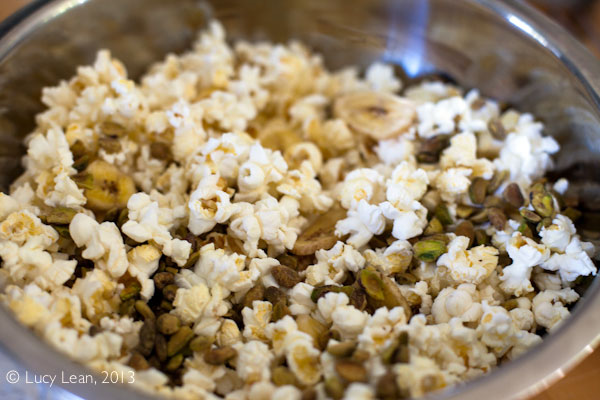 3. In a small heavy saucepan melt the butter. Add the sugar, 1/2 teaspoon salt, the vanilla paste and 3 tablespoons water and bring to the boil, stirring constantly. 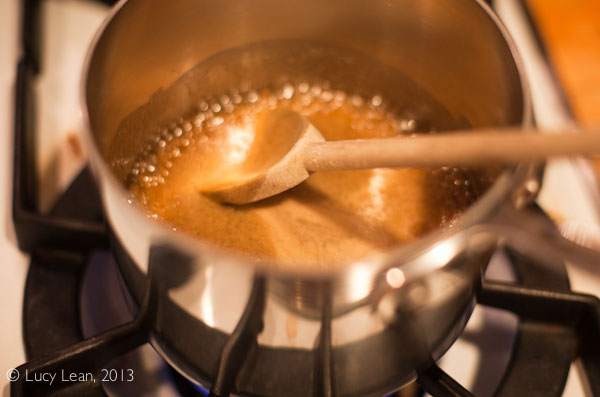 4. Remove from heat, wait for 2 minutes and then slowly drizzle half of the hot sugar mixture over the popcorn using a wooden spoon, toss to coat evenly. The key here is not to drown the fluffy popcorn in the liquid but to lightly coat it. (If some of the pieces do shrivel don’t worry, they become a bonus treat at the bottom of the bucket.)

5. Spread the coated popcorn out on the foil lined baking sheet and drizzle over the remaining half of sugar mixture. Toss some more and bake for approximately 4o minutes, tossing every 15 minutes (twice) with two wooden spoons. When the caramel corn turns golden it is done. Remove from the oven and transfer the shiny caramel corn to the paper-lined baking sheet, spread out evenly, sprinkle the popcorn with the remaining 1/2 teaspoon of coarse sea salt.

6. Sprinkle the caramel corn with the milk chocolate crispearls, you want the crispearls to stick to the caramel corn but you don’t want it to melt too much so it’s a good idea to test a couple first to make sure the caramel corn isn’t too hot. Finally sprinkle with the pop rocks and serve in popcorn buckets. Hopefully the noisy popcorn won’t disturb anyone’s movie watching pleasure. 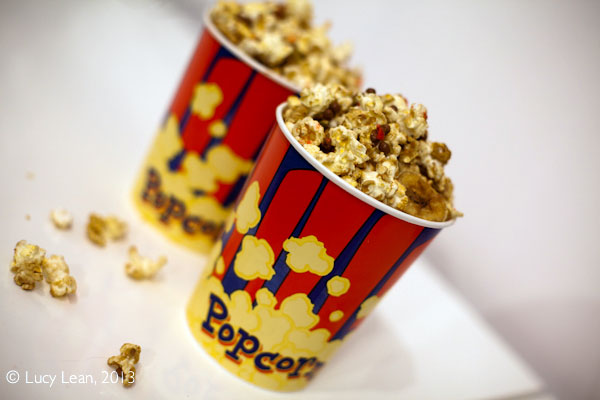 Would you like to learn more about THE CROODS?

Disclosure: This post was sponsored by 20th Century Fox and Dreamworks Animation. All opinions, recipes and food photography are my own.