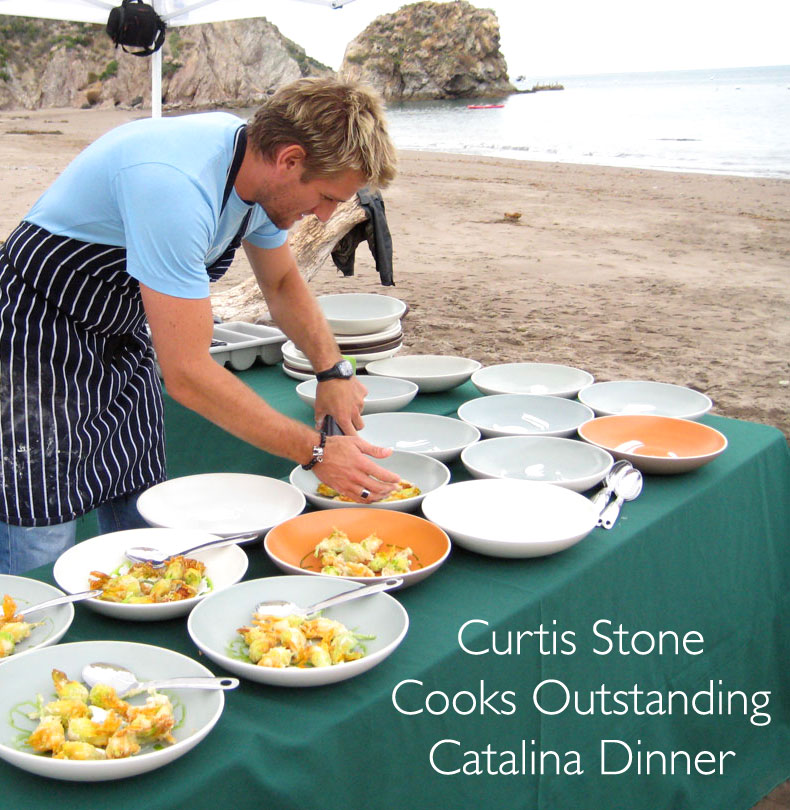 Chef Curtis Stone cooks a gourmet beach barbeque for Oprah Winfrey down under on Oprah today. In light of today’s TV show I wanted to share my own gourmet beach dinner experience courtesy of Curtis back in June of last year.

How far would you travel for a meal? I have been to Corsica from Sardinia on a boat for a delicious lunch at a restaurant on the beach and even to Paris from London on the Eurostar for a picnic under the Eiffel Tower. I once took the Jitney from Manhattan out to Montauk to surprise my fishing hubby for supper. 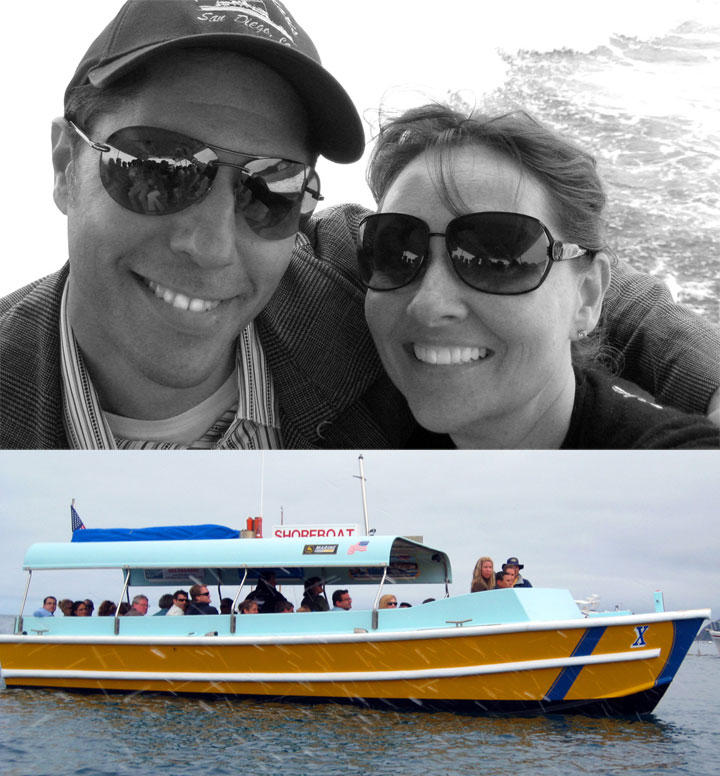 I would have gladly gone with Oprah down under – but sadly that invite got lost in the mail. Lucky for me Curtis invited me to dinner last summer, it wasn’t down under but instead a mid-week mini-break to Catalina, for an Outstanding in the Field event. Hubby and I drove to Long Beach where we hopped on the Catalina Express to Avalon. We checked in to the Hotel Metropole and dropped off our overnight bags before boarding another much smaller boat that took us out of harbor and along the shores of Catalina. The boat rounded the rocky point and headed into a cove where the long table set for 120 guests curved up the beach, white tablecloths billowing in the late afternoon breeze. 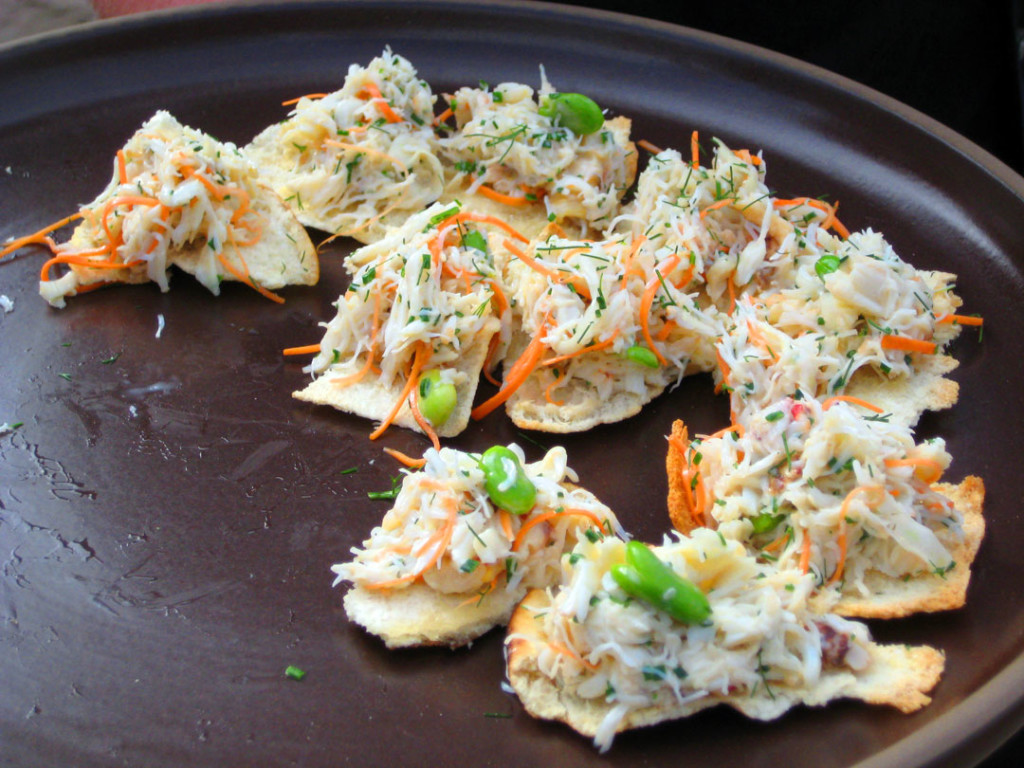 As we nibbled on Dungeness crab and sipped Sauvignon Blanc from Rusack Vineyards with soft sand between our toes the sun peeked out from behind the clouds. We were greeted by Jim Denevan (Outstanding in the Field’s Founder) who explained how he had set up his “mobile restaurant without walls to celebrate and honor farmers and fishermen of the region” in the place where the food originates – be it farm, vineyard or in this case on the beach next to the ocean. Denevan introduced local fisherman Captain John who gave us an in-depth talk, complete with wooden fish models, about the sustainable fish we would be eating that, fishing for the illusive grey ghost, rattling fish ears and other such oddities that are found off the shores of Catalina.

We strolled up the beach to take our seats, leaving the plates we had been asked to bring in a stack on a small table. This is a tradition of Outstanding in the Field – guests bring a plate to the dinner.

Curtis and his team were frantically cooking in their open air kitchen just behind where we sat. Making stuffed squashblossoms and not having them go soggy and greasy is hard at the best of times – try cooking them in a kitchen that’s only one up from camping for 120 people! These were crispy and light on the outside and then filled with a rich buttery filling that had a hint of the sea. Recipe please Curtis! 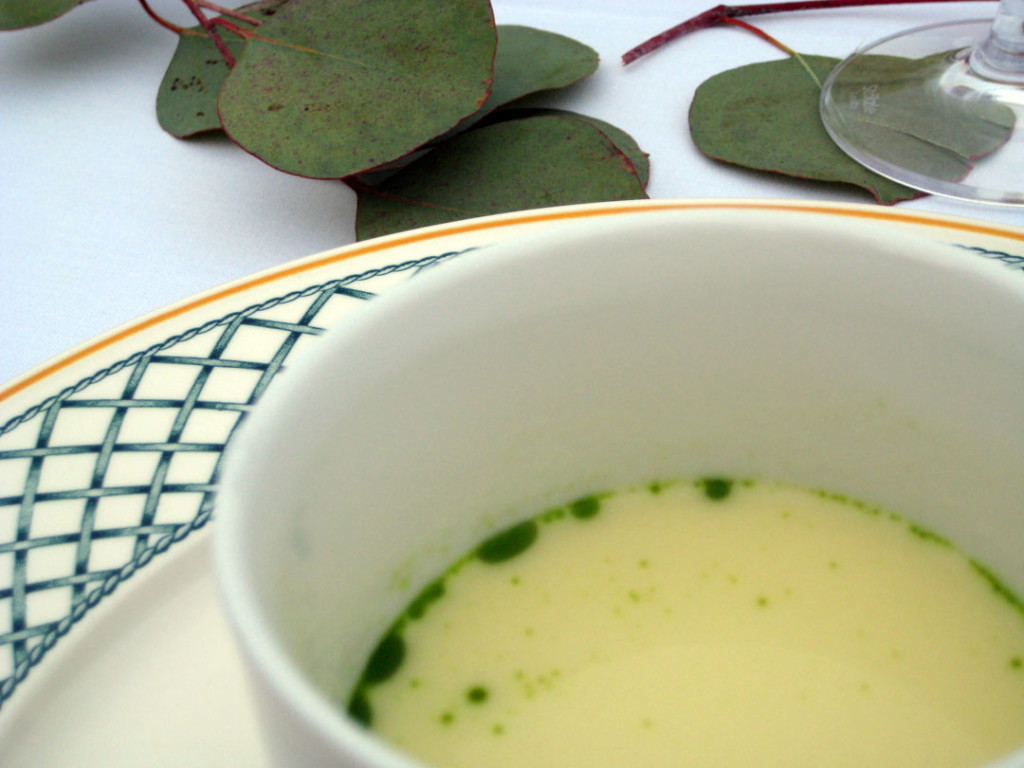 Sea Bass Soup with branches of eucalyptus to decorate the table. Curtis had suggested this as a nod to his homeland, Australia where the eucalyptus trees originated. The soup is sitting on my plate – a Villeroy and Boch dinner plate from La Cote Basque – we thought that it was fitting for such a decadent dinner – rather Victorian in the way that trunks of china, crystal and silverware would have been carted in for such a picnic on the beach. 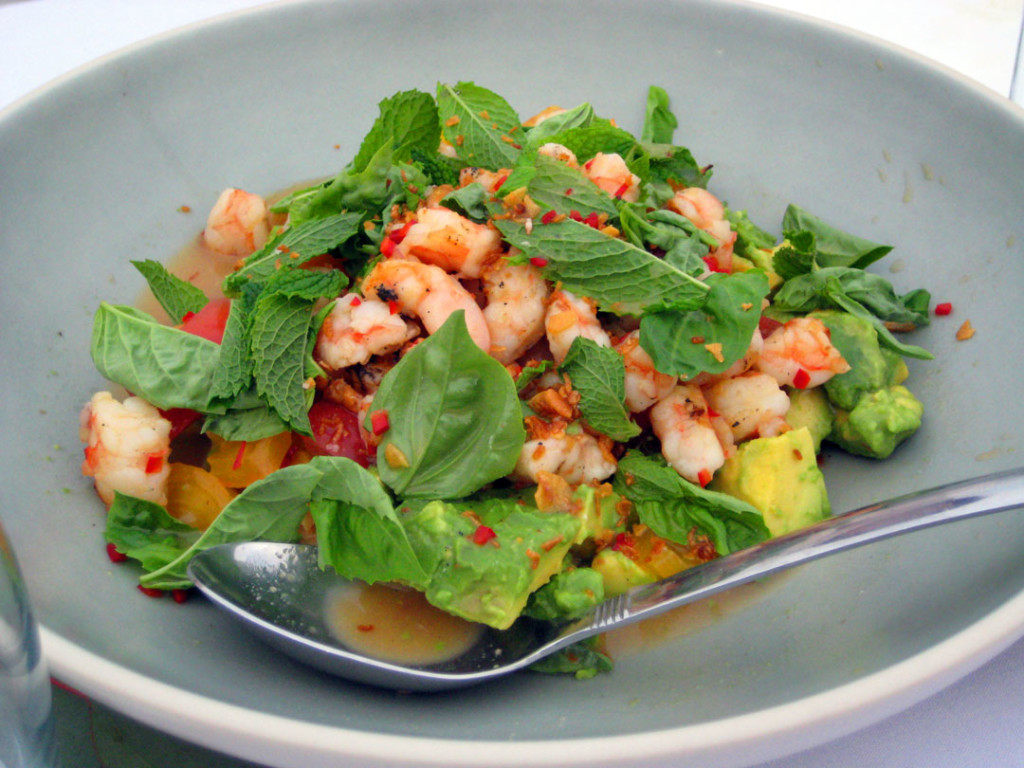 The ceviche was perhaps my favorite dish of the meal – shrimp and large chunks of avocado were dressed in a fresh, light and citrusy marinade with lots of basil and mint leaves and a hint of spice from red chilies. Everything was served family style from these beautiful platters [anyone know where they were from please let me know and I’ll credit them – and also source some for my table at home!]. There was a quick menu change at the last minute – fog had prevented some of the food, including the yellowtail for the ceviche, from arriving via plane from the mainland to the island. In true island living fashion Captain John’s Catalina pals managed to locate some shrimp at the eleventh hour – just what our esteemed Australian chef is used to cooking on the barbie, instead he marinated it and served us ceviche. 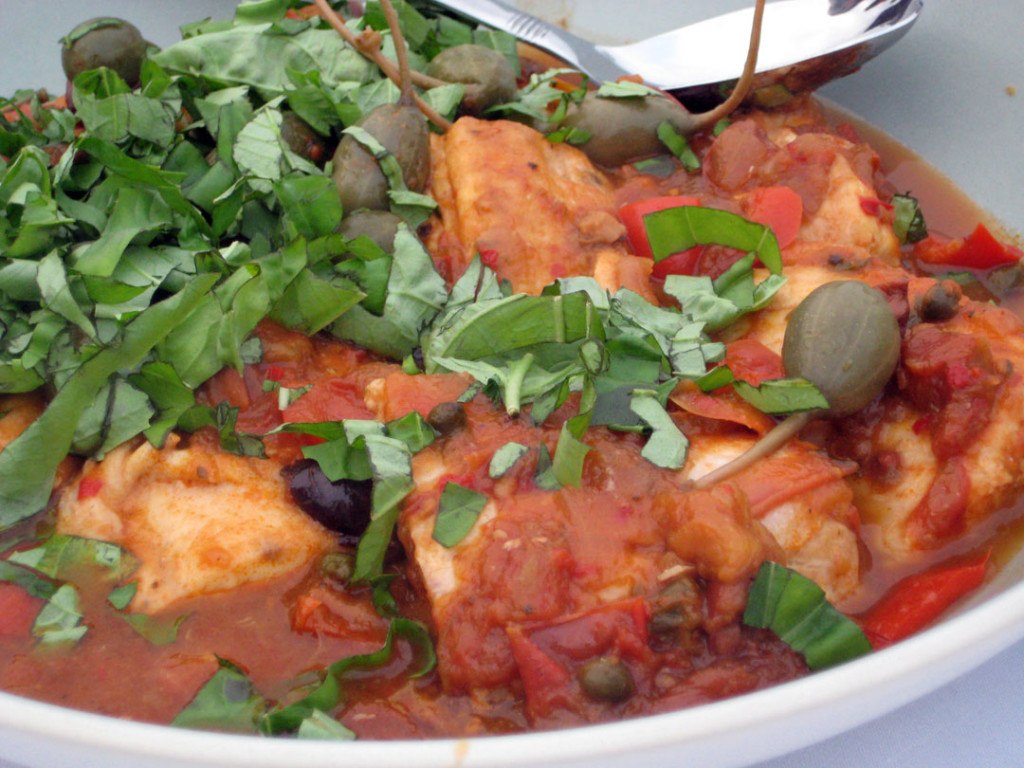 Curtis cooked the local sea bass we had heard all about from Captain John in a Mediteranean style sauce with tomatoes, peppers, and giant caper berries. The sea to table menu was complemented by vegetables from Weiser and McGrath Family Farms – both farmers, Alex Weiser and Paul McGrath and their wives had made it across from the mainland for the dinner. This plate alone would have been worth the trip: Crunchy green snap peas sprinkled with sesame seeds, roasted baby purple potatoes and multi-colored heirloom carrots. 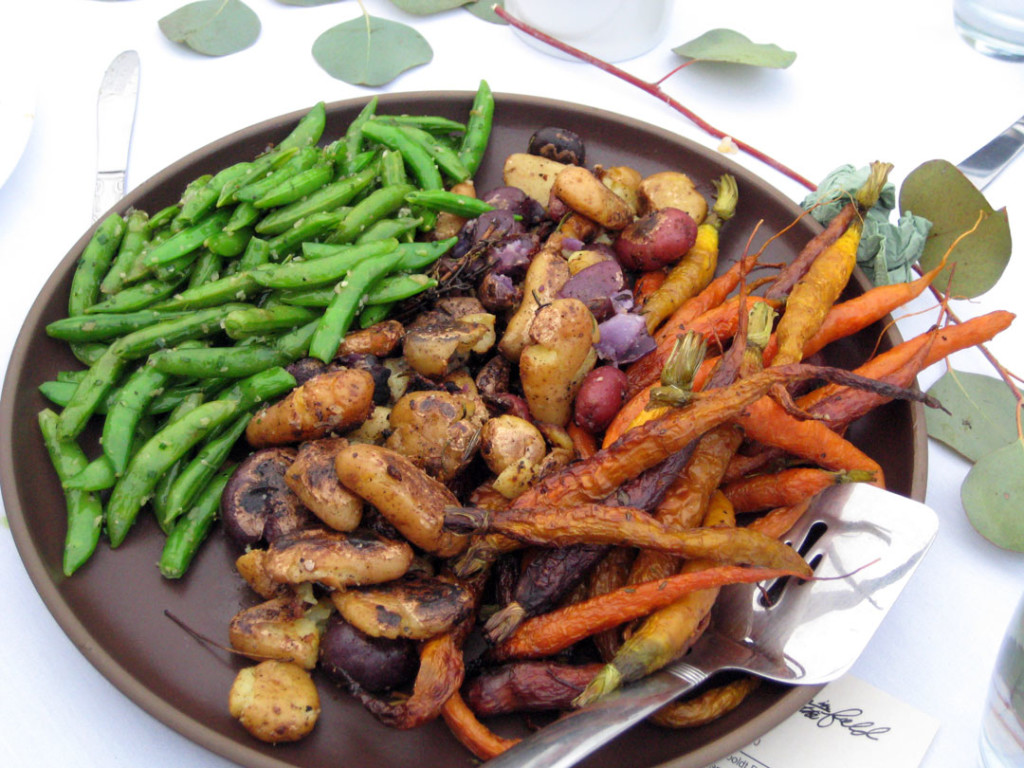 As the sun disappeared behind the hills and the light began to fade fast we made it to the dessert course – Eaton Mess – fresh berries, lemon curd (made from lemons from the tree in Curtis’ girlfriend Lindsay’s garden) and crunchy meringue – given the Australian penchant for Pavlova I’m surprised Curtis gave a nod to the English private school rather than the Russian ballerina – either way it was a sublime ending to an even more sublime dinner. Everything tastes better when eaten outside and this was no exception.

Wines paired with the menu included Rusack Vineyards Chardonnay and Pinot Noir and a Soul of the Vine dessert wine. Rusack Vineyards are growing vines on Catalina and started harvesting the grapes in 2009. I don’t think the wine we were drinking came from grapes from Catalina but I may be wrong – need a better fact checker! 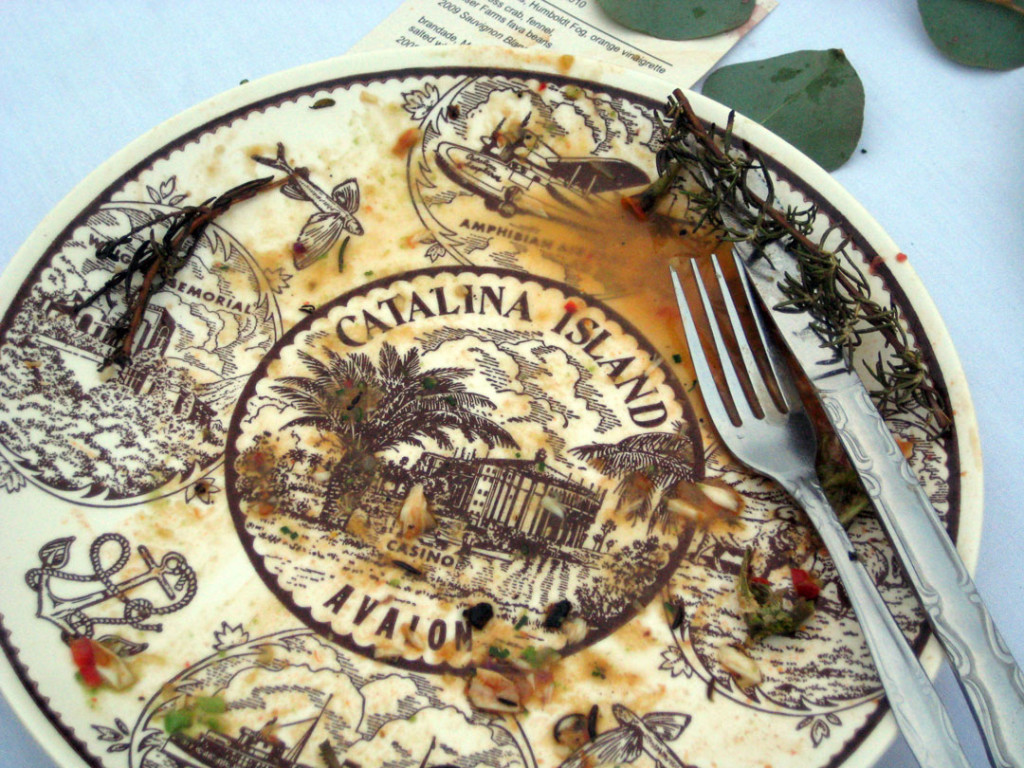 Darkness was upon us and the cooking was done and plates licked clean. Curtis mingled with the guests, happily posing for photos as he was serenaded by a group of women who sang to him:

We all piled back in to the waiting boats and sang our way back to Avalon.

Once in the town a small group of us headed to a local Karaoke bar where Lindsay took center stage – working the crowd and singing for her supper  – all rather too well!