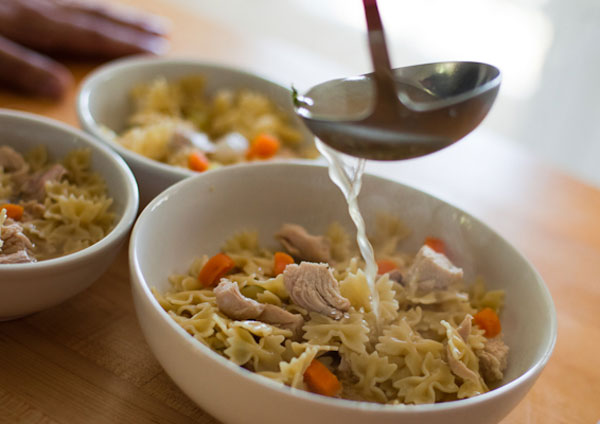 This is the ultimate Lean Luxury meets Comfort Food – Chicken Soup – Lean Fix by Tom Colicchio from Made in America.  It’s one of my favorite recipes from MADE IN AMERICA to cook for the family  – I make it at least twice a month – and more like once a week, with the sniffles we have all had to varying degrees recently. It’s also super easy to prepare, extremely satisfying and I can adapt it to keep it light – it’s a natural LEAN FIX! The kids can’t get enough of this soup. I have made it so many times now that it’s changed a little from the original recipe that Colicchio gave me for MADE IN AMERICA but the essence of the original recipe remains the same. 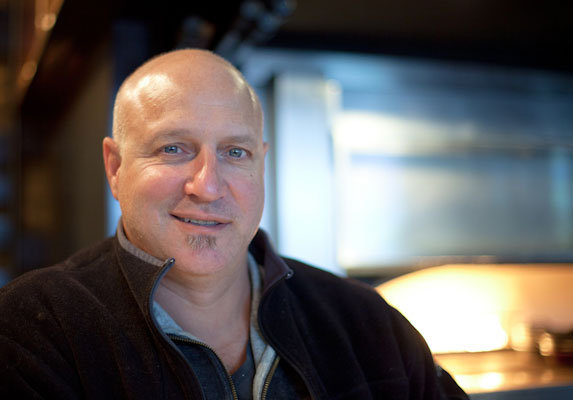 Excerpt from MADE IN AMERICA:
“This is what I do on days like today,” says Tom Colicchio, “I make chicken soup.” It’s blizzard conditions outside and it’s taken five minutes for me to defrost as we sit together at Colicchio & Sons, the stylish restaurant he opened when his second son was a newborn. Colicchio’s chicken soup is his go-to recipe at home; he cooks it up about twice a month for his family. Colicchio hasn’t ever put this soup on the menu at his restaurant, braised chicken with truffles under the skin, similar to a dish he did when he worked at Gramercy Tavern, yes, but not a lowly chicken soup. Sam Sifton in his three star New York Times review wrote that the menu at Colicchio & Sons has “an aesthetic that is entirely American. It appropriates all that has come to it, without apology.”

When Colicchio is in town and not on set as the chief judge on Top Chef he’s at his restaurants, although the James Beard Outstanding Chef of 2010 is the first to admit he cooks a lot less these days. Colicchio hates the term celebrity chef, although finds it funny that movie stars, like Kate Winslet, who he considers real celebrities, ask to meet him. We talk about apps for the iPad—he’s not that impressed with the cooking ones to date. He enjoys reading the blog “Ideas in Food”—“There’s a lot of information and the photography is great.” However, the lack of ethics on a lot of the internet food sites angers him. “They make stuff up, they claim they are journalists but it’s tabloid and they don’t check facts or even care. Horrible.” We talk about the new ideas in cooking and molecular gastronomy,  “I want to start messing around with liquid nitrogen, but it’s all a little bit of a gimmick.” 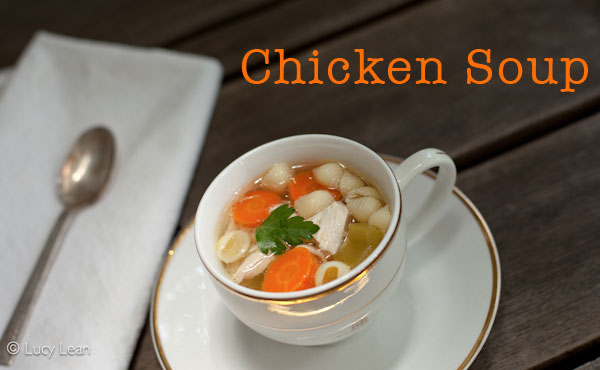 People have turned to chicken soup as a cold remedy for centuries around the world.  Dubbed “Jewish Penicillin,” chicken soup was even given as a prescription in England, and the Chinese also believe it helps to restore health. Recently science is catching up to tradition, and studies show that the soup does indeed have anti-inflammatory properties and thins mucus, plus the steam helps to decongest, the vegetables contain lots of healthy nutrients and the light broth is easy to digest.

In medieval times in Europe the soup was eaten separately from the chicken – which is how Colicchio suggests serving his dish. Across the world starch has been added to the soup; rice noodles, pasta, potatoes or dumplings can all be served with it.

Colicchio’s chicken soup is bursting with flavor and restorative, perfect if you are in need of a boost reaching for tissues. “The hardest part of the recipe is the cutting of the chicken. I like to start the chicken in the water and cook for forty minutes before I add the vegetables and then I add the pasta shells at the end,” he says. Once you’ve tried this simple and straightforward recipe, I’m certain you’ll never go back to canned or boxed soup again.

I don’t bother quartering the chicken – I place the whole bird into the pot and then pick off/carve the meat when it’s cooked (it’s usually falling off the bone). This cuts out the hardest part of Tom’s recipe.  The family all have large helpings of pasta in their soup whilst I usually eat it without. 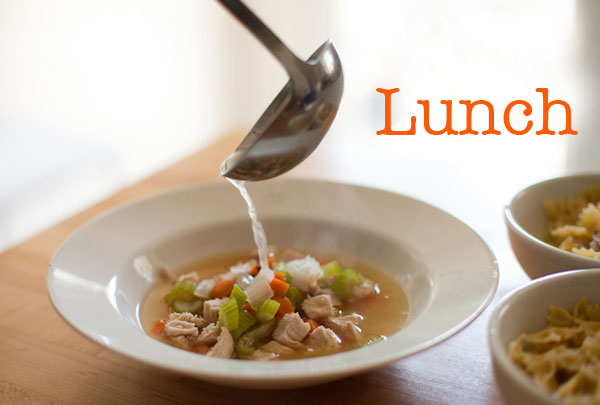 Adapted from Tom Colicchio’s recipe in MADE IN AMERICA

Makes 4 servings with lots of leftovers

1. Rinse the chicken under cold running water and place in a large stockpot with enough water to cover it, about 1 gallon. Over low heat simmer gently, skimming regularly for 30 minutes.
2. Add the chicken stock, carrots, celery, leeks, parsnips, onion and fresh herbs. Season with salt and black pepper. Simmer for a further 20 – 30 minutes.
3. Meanwhile, over high heat bring a large pot of salted water to the boil. Add the pasta and cook until al dente. Drain, return to the pot, add ½ cup of the broth from the soup and cover until ready to serve.
4. Divide the pasta into 3 of the 4 bowls, no pasta for those keeping it carb-lite. Remove the chicken from the pot and either serve alongside the soup as Colicchio suggests or pull off pieces of chicken and add to the bowls. Remove some of the vegetables, slice and divide between the bowls. Finally, ladle the hot chicken soup into each bowl and serve immediately with the grated Parmigiano-Reggiano and a drizzle of extra-virgin olive oil.