On Saturday we went to a wonderful dinner party hosted by Patric Kuh and his family, with old friends and new. We celebrated Jannis Swerman’s mother’s day glow green jello recipe that Patric had made – let’s politely describe it as odd – lime green jello with sour cream, nuts and pineapple. Patric is giving a talk at the Huntington on March 29th about community recipe books and wanted to try to make some of the recipes.  Jannis not only provided her mother’s cookbook from the 50s but also the jello molds. Patric had once worked for Chef Alain Giraud, another mutual friend dining Chez Kuh, with his lovely wife Catherine.  We reminisced about our time at the Farmers’ Market so I thought I’d repost this profile I wrote about Alain.  It’s also Planned Parenthood LA Food Fare this week – not sure if there are still tickets but this is a great event – that started as a series of cooking demos with Julia Child.

Looking back to Planned Parenthood LA Food Fare 2010 when I interviewed Alain Giraud at the farmers’ market for Zester Daily: 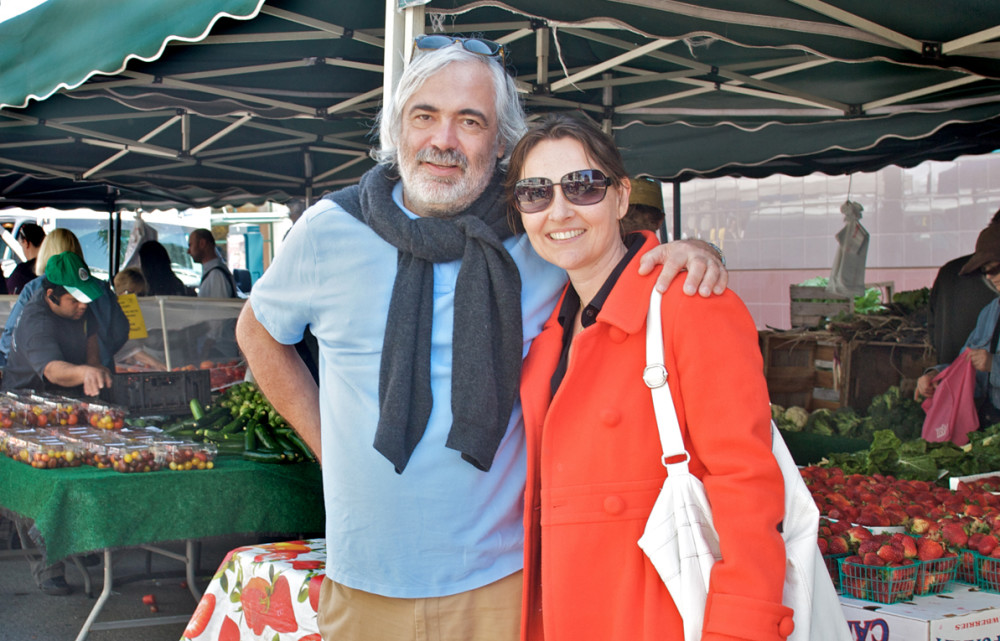 Who better to explore the Santa Monica Farmers Market (SMFM) with than French Chef Alain Giraud? His brasserie Anisette is one block from the market and he’s been shopping there since he moved to Los Angeles from France in 1988. He had no intentions to stay, but stay he did. Fast-forward 22 years over an impressive career spanning four restaurants — Citrus, Lavande, Bastide and Anisette — and 2010 sees Giraud being honored at the Planned Parenthood LA Food Fare as chef of the year. “I asked them why they choose me and they said because you are a smiley guy!” 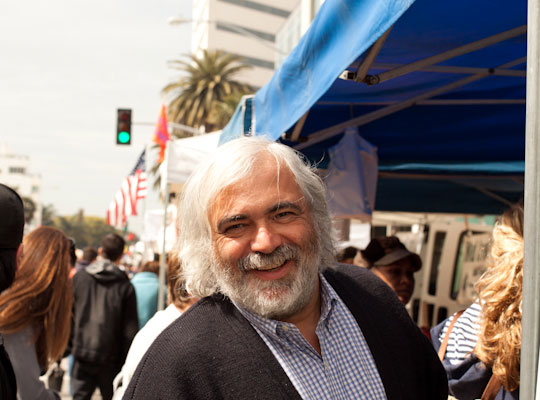 The PPLA Food Fare began with a cooking demonstration by Julia Child in 1979. Giraud, who cooked for Julia Child at the “Merci, Julia” 80th birthday dinner in 1993, was excited to learn this. “I was thinking to do some scallop dish, so I will look in the book and see something about Julia.” It seems even esteemed French chefs still can’t get enough of Julia Child. 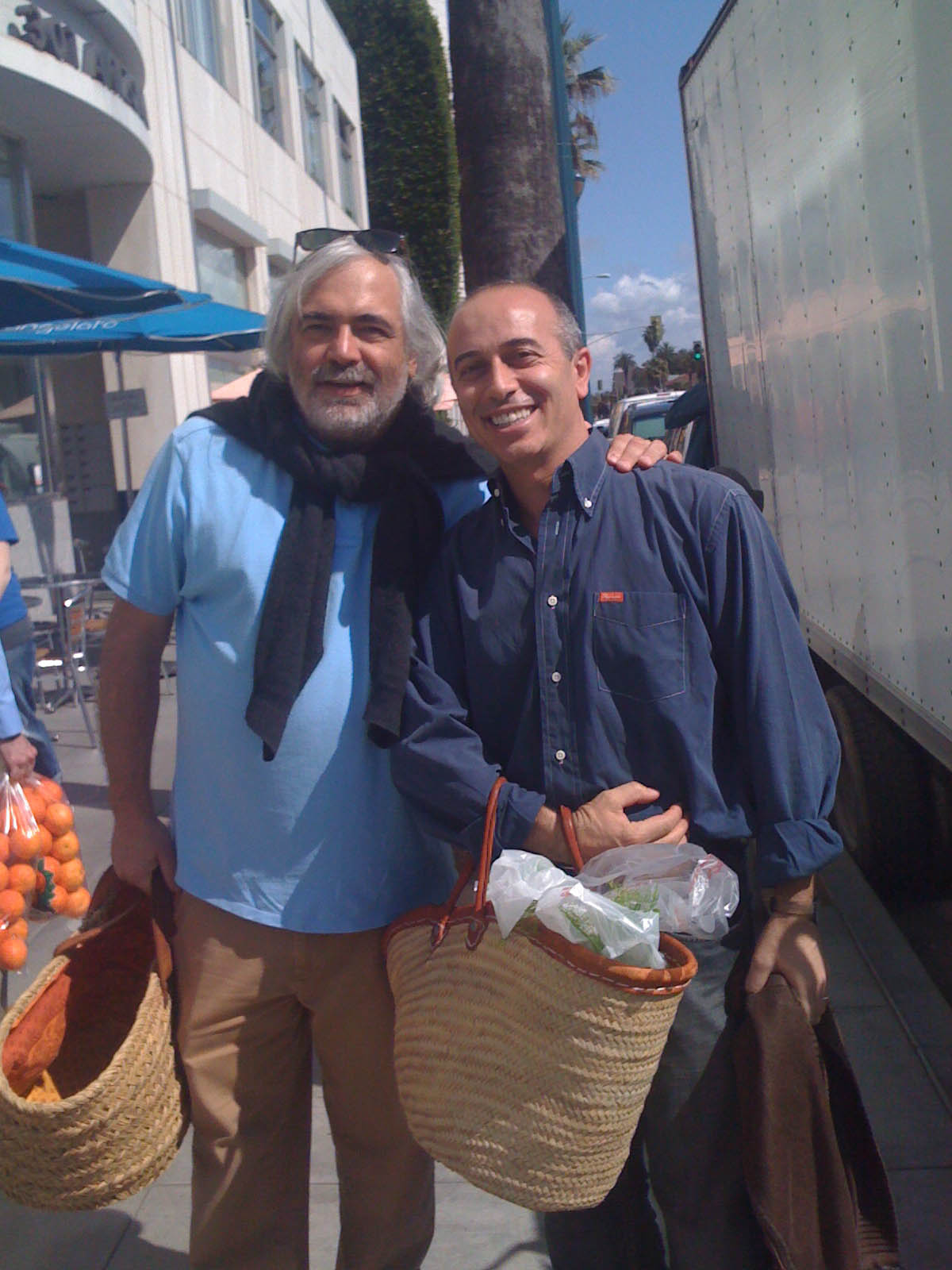 We meet on a sunny Wednesday morning in the middle of the market, and I instantly know it’s going to be fun, flirtatious and undeniably French. He’s had his weekly coffee with Donato Poto of Providence (one of the dream team from the early days of Bastide), something that happens every Wednesday at the market. We stop to share a joke and a giggle with Poto and this sets the tone for the rest of our morning together. They are both carrying their traditional French market baskets­ — Poto’s is full and he is heading back to Providence leaving Giraud and me to shop or, as Giraud likes to call it, “our first date.”

First stop is the Weiser Family Farms stand for potatoes and to introduce me to his friend, a fellow Brit behind the table. Giraud picks through the small white new potatoes and tells me it’s important to pick the same size so they cook evenly. He then carefully chooses two servings of purple carrots. As he pays he asks whether his friend Alex Weiser (the owner of Weiser Family Farms) is at the market and is told he is around somewhere. 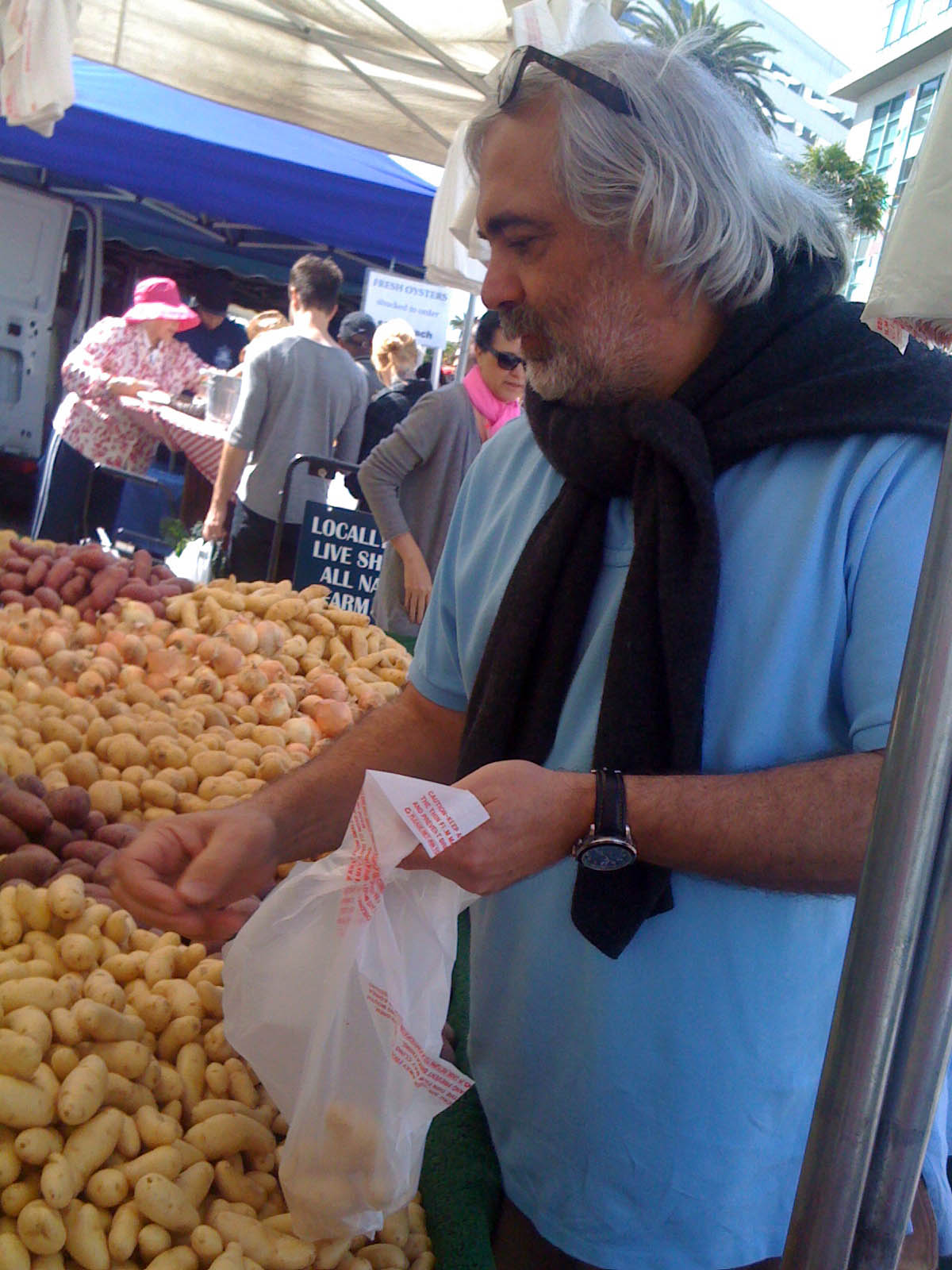 It’s obvious that Giraud is a regular as he stops to shake hands with a friend, greets a farmer or heads to a particular stall to see whether they have produce he’s been waiting to be in season. He knows everyone, the cafe owner where we have coffee, the farmers, the customers at the market, chefs and restaurateurs. We can’t walk five paces without Giraud stopping to talk to someone.

He prefers a beefsteak to an heirloom tomato he says as we walk past a table piled high with red, green and yellow heirlooms, though he’s not keen on any of these today because it’s too early in the year. 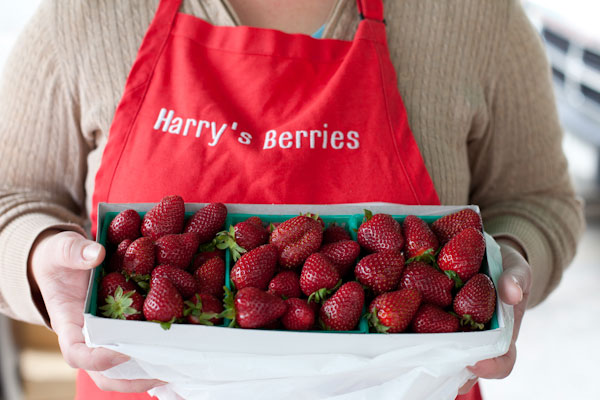 “The best strawberries are Harry’s,” he says, as we pass Harry’s Berries. “But $16 a basket is a lot.” I ask him if it’s worth the price difference and he’s adamant – “It’s like a wine, you pay $300 for a Burgundy against a shit cheap wine, it makes a difference. This is my philosophy about that, with onions you can buy the super organic onions and you buy supermarket onions and you cook them nicely both and if you can tell me the difference, good luck. Buy a cheap strawberry at the supermarket and you compare it to a Gaviota or a Seascape from Harry’s Berries and there is no doubt, night and day. The texture, flavor, it tastes like a strawberry you can memorize why it is that you fell in love with it so much.”

Giraud spots the leeks at Tutti Frutti Farms and hurries over to buy some. “These leeks are good. I bought some last week, they were very small, and they were so good. I cook them with a little water and salt and then serve them warm with a very mustardy vinaigrette and shallots – ooh this is good! That is the one I serve at home, but at the restaurant I do a very small dice and we cook it very quickly with a little stock and butter to keep them green and I like to add pistachio. I love pistachio.”

“She has the best smile of the market,” he says laughing when we get to the mandarin stall. “I say that to everybody! I go again for $10. I finish them like that. This is my snack at night.” The smiling citrus farmer hands over a large bag of mandarins that Giraud puts in his basket with the vegetables as he gives her $10. 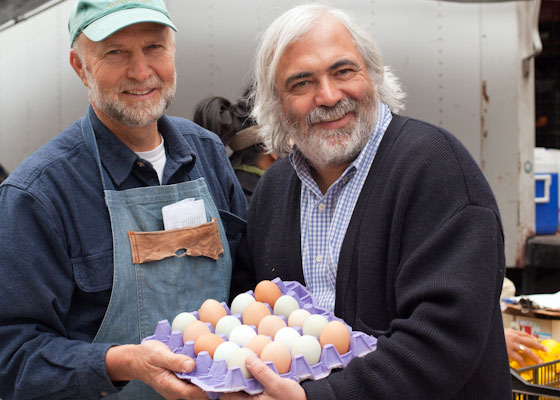 At the Schaner Farms table Giraud greets Peter Schaner, the owner who is sorting boxes in his truck. “Peter does mostly citrus and small-farm things, he delivers to all the restaurants at the end of the market. (A clipboard lists a who’s who of local restaurants and their orders — so far Ammo, Hungry Cat, Gjelina and Little Door have all placed orders.) Three years ago I bring Peter’s avocados to my mum in France in my suitcase so she has an avocado from California.” He proudly shows me a picture on his iPhone of his mother holding a bowl of dark green avocados.

“The market is more expensive, so we have to be more careful in this economy. We used to spend a lot more at the market, but we have had to cut back. But I want to keep the connection to the market because it’s so important. Next week we are having a booth and we are doing the mini pastries.” These pastries made it on to the Jonathan Gold “99 things to eat before you die” list, and you can tell this pleases Giraud when I congratulate him, but he’s also keen to share credit with his pastry chef Noubar Yessayan. “He works so hard on these and deserves the credit.” As if on cue, we run into Laura Avery (Head of the SMFM) who greets us warmly and tells me, “The best pastries this side of Paris. Come down for the croissants next Wednesday.”

“Next week I have a busy week,” says Giraud. “We are doing Wednesday here at the market and Thursday I am doing the Planned Parenthood event at the civic center. I ask for a blonde sous chef and they give me the blonde from ‘Curb Your Enthusiasm’ [Cheryl Hines].”

‘I never intended to stay’

Giraud arrived in L.A. in 1988 from the South of France by way of New York and was Chef Joachim Splichal’s roommate. Chef Michel Richard had just opened Citrus, and Giraud planned to cook there for a couple of weeks. “Citrus was ahead of its time,” says Giraud, “Using very fresh high-quality ingredients to serve a larger number of guests, it dispelled the notion that volume was associated with bad quality; that was the thought in France at this time. Three hundred and fifty customers a night, 250 at lunch and everything totally fresh and totally innovative, for me it was a revelation and I fell in love with this concept. Richard was a visionary, being one of the first to open the kitchen up to full view of the dining room with the glass wall. So I stayed two weeks and made friends with the guys.

“Then Pierre Sauvaget, one of the chefs, got another job and asked me to do him a favor and stay a few more weeks. So I stayed a little while and a few weeks after Michel asked if I wanted to stay. In that same year I met a nice blonde from Lyon called Catherine et voila two years after we were married in 1990. Then we had our babies and started our life here. I spent eight years at Citrus and I was very happy.”

When Citrus closed Giraud opened his first restaurant the Lavande at the Loews Hotel on the beach at Santa Monica. After three years at Lavande, Joe Pytka entered Giraud’s life. They met through carpooling their young children to the Lycee Francais — “Joe in a Bentley, me in my Honda!” Together they would assemble a dream team and open Bastide, which led to four stars and Giraud living his dream, but there was a price to pay.

“Opening Bastide was like dating Ms. Universe.” Giraud says. “You know it’s a dream, but you know a lot of men will look for Ms. Universe too, and I know there was a lot of jealousy around me because I put myself in a position to have all the tools to succeed, but what people don’t know from the outside is that I pay a very high price mentally and physically to do that. It was not like someone signed a check and said I’ll see you in one year. A lot of heartache, screaming and stress. It was very hard. I started the project in 2000 and I left in 2004.

“What hurt the most for me at the end of Bastide was I wish I had got the full package that was Bastide. Creating the brand was like creating a line of haute couture and I wanted to do the pret a porter too — the catering, doing the bistro, doing Las Vegas — doing all these things and it was just here. But with Joe our goals separated. When we started Bastide I could visualize it — the fountain, the olive trees, the lavender, the gravel crunching — which we had to give up because of the ladies Louboutin heels! I say what the heck, I wanted to have the noise. I was so disappointed about that.”

I get the impression that cooking for the brasserie Anisette is a little too pret a porter compared to his previous couture creations in the fine dining world of L.A. This chef needs a little more refinement, and the brasserie menu of Anisette is perhaps too restrictive?

When asked to describe his dream restaurant he becomes very animated. “Not high end, but not bistro and spontaneous, today I buy this and I want to cook that tonight. To approach it from the ingredients. I want to have the luxury to buy those Harry’s Berries strawberries. Virbila [S. Irene Virbila, Los Angeles Times restaurant critic] once said that perhaps the best dessert she’s ever had was the perfect peach. You have to have a lot of guts as a chef to serve the perfect peach. Like the strawberry, once in a while I can close my eyes and say wow! As a chef, I think it is the ultimate challenge to do that.”